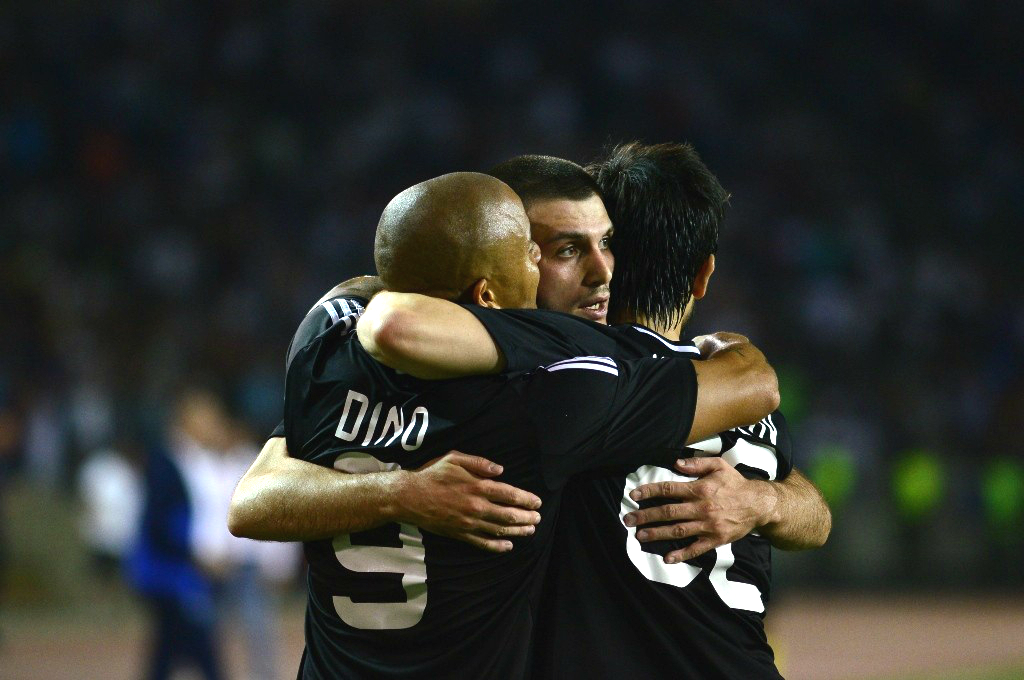 Football fans in Azerbaijan are celebrating the Qarabagh club’s 5-0 victory over neighboring Georgia’s Samtredia, as part of the 2017-18 UEFA Champions League qualifying match.

On Tuesday, Tofig Bahramov Stadium in Baku welcomed thousands football (soccer) lovers that came out to support the club nicknamed “the Barcelona of the Caucasus.”

Shortly after the match began, Afran Ismaylov from Qarabagh scored the game’s first goal from a penalty, which was greeted with a loud scream by fans. The second and third goals were made by Dino Ndlovu during the first half of the game, while Wilde-Donald Guerrier’s goal in the 83rd minute made all the difference in clinching the victory. Miguel Marcos Madera, better known as “Michel,” closed out the match after he scored the fifth and final goal.

Qarabagh’s head coach Gurban Gurbanov, who was named “The Best Football Coach of 2016” in Azerbaijan, believes that the club’s fans were a big factor in the team’s victory over Samtredia.

“We started the game hard despite the quick first goal. We knew that we had problems, but the guys showed their nature. Of course, the fans played a big role in the victory,” Gurbanov said while speaking at a press conference held after the match.

The two teams will square off once more in Tbilisi on July 18 at the Dynamo-Arena stadium, where the Georgian team must score at least five goals in order to remain in the runnings for getting to the next stage of qualifying matches.

Ibrahim, age 25 and an ardent fan of Azerbaijan’s Qarabagh team, believes the home-field advantage for Samtredia in Tbilisi won’t stop Qarabagh from claiming another victory.

“Our team will again win, as Samtredia is unlikely to make a comeback. Qarabagh is unlikely to allow five goals from our neighbors,” Ibrahim told Caspian News.

This week’s match is considered the biggest victory for Qarabagh, a club that represents Agdam city in Azerbaijan’s Nagorno-Karabakh region. After being occupied and destroyed by neighboring Armenia during the war in 1993, the club was forced to relocate to Baku.

Agdam faced a fate similar to many other areas in Nagorno-Karabakh, however, in the wake of a bloody conflict that still simmers to this day.

Throughout the hostilities, Agdam’s Qarabagh club went through some rough moments, including the death of its head coach Allahverdi Bagirov, who was posthumously awarded the title of “National Hero of Azerbaijan.”

Despite all the hardships, Qarabagh has proven itself worthy time and again:  Three times in a row it won admission into the prestigious Union of European Football Associations (UEFA) European League.

Arthur Huizinga, a co-author of the book “Football in Exile,” which illustrates the human tragedy of a country torn apart by war from the perspective of two football teams, wrote that Qarabagh not only survived, but “became a symbol of hope and pride for over half a million refugees scattered across Azerbaijan, many of whom still live in temporary settlements within a few kilometers of the frontline.”