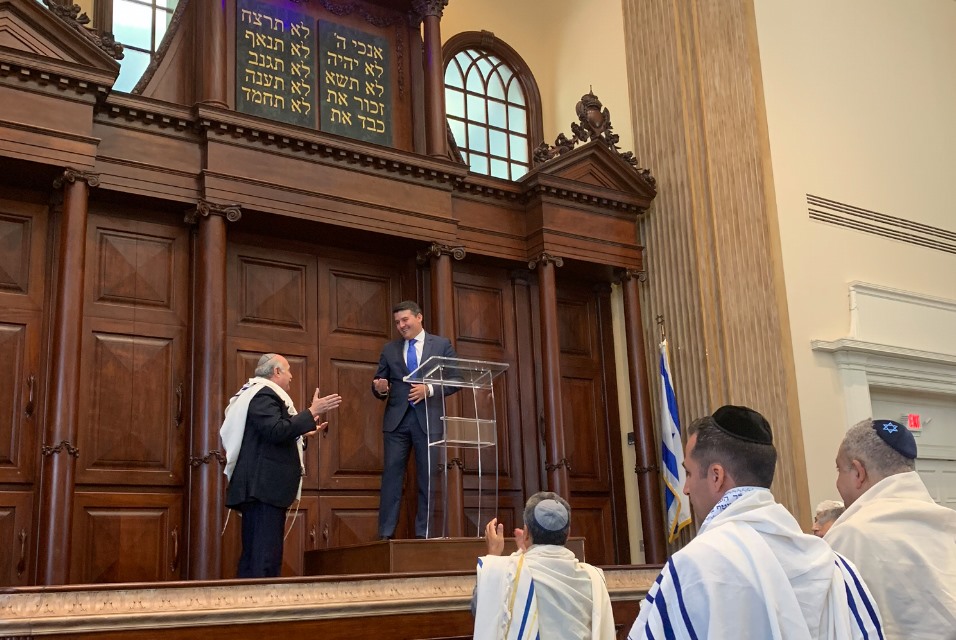 A member of the Nessah Synagogue in Beverly Hills greets Azerbaijan's Consul General in Los Angeles, Nasimi Aghayev after he delivers a speech at the conference, August 17, 2019 / Facebook page of the Consulate General of Azerbaijan in Los Angeles

The largest synagogue for Persian Jews in Los Angeles hosted a conference that highlighted how Azerbaijan has promoted multiculturalism and interfaith tolerance in what is the Muslim-majority country of 10 million people along the Caspian Sea.

The event, held on August 17, gathered over 800 members of the congregation from the Nessah Synagogue in Beverly Hills, according to a post that was published on Wednesday on the official Facebook page of the Consulate General of Azerbaijan in Los Angeles.

Nessah’s Chief Rabbi David Shofet said in his opening remarks that Azerbaijan embraces Muslims, Jews, Christians and practitioners of other faiths, and is where peace, dignity and mutual respect have been found for centuries. Shofet was reported as saying that Azerbaijan’s warm relations with its Jewish community and the State of Israel serve as a great example for other countries around the globe.

Azerbaijan’s consul general in Los Angeles, Nasimi Aghayev, said Azerbaijan today is an island of stability and prosperity in the Caspian region, which is located at the crossroads of Europe and Asia along the western shores of the Caspian Sea.

“The principle of interfaith tolerance and harmony has always been an important part of Azerbaijani culture,” Aghayev said in his address at the conference, according to the Consulate General of Azerbaijan in Los Angeles. “But as an independent nation, Azerbaijan has elevated this principle making it a strong government policy under the leadership of President Ilham Aliyev.”

Aghayev said Azerbaijan serves as an example of multiculturalism and multifaith harmony being a possibility in today’s world.

“This policy and the environment of religious tolerance and inclusion enables all Muslims, Jews, Christians, Baha’is and others to have the full freedom of religion, practice their faith freely and live in harmony with representatives of other religions.”

Jews are one of Azerbaijan’s minority groups with an ancient history. Caucasian Mountain Jews, as they are called, have lived in Azerbaijan since the 5th century, when Jews from Persia and possibly the Byzantine Empire were thought to have moved northeastward and settled in the region.

Jews flourished mainly in the town of Krasnaya Sloboda, said to be the only all-Jewish town outside Israel. Around 4,000 Mountain Jews settled there after the Muslim ruler of Azerbaijan's Quba Khanate Fatali Khan granted them permission in 1752. 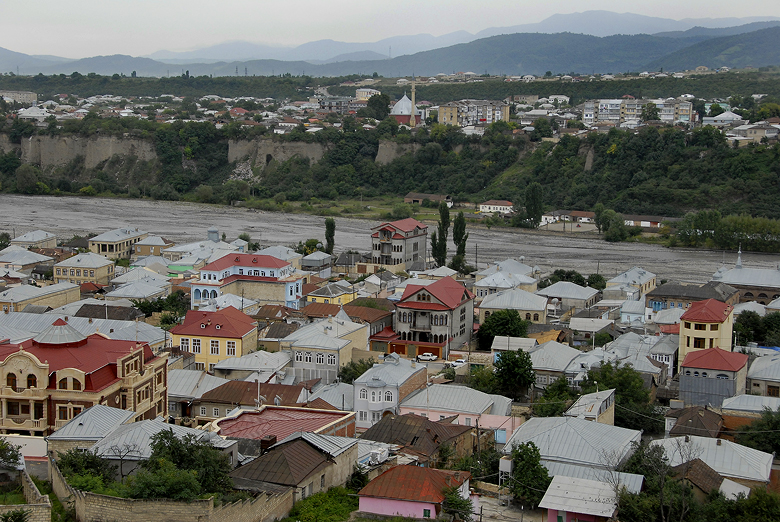 The town of Krasnaya Sloboda, shown in the foreground, is separated from the Muslim city of Quba, across, by a narrow river / Courtesy

The Persian Jews community is historically associated with the Persian Empire, whose successor state is Iran. But after the fall of Iran’s last king, Mohammad Reza Pahlavi, and with the theocratic system of government coming to power in the wake of the revolution, the fate of Jews living in Iran was in serious jeopardy.

According to the Jewish Telegraphic Agency, Iran’s Jewish community numbered around 80,000 prior to 1979, and today is estimated to be somewhere between 5,000 and 8,000 people. Many of those who had to leave Iran after the revolution had moved to Israel, or the United States, where many formed communities in neighborhoods of Los Angeles, such as Beverly Hills, Encino and Brentwood; or in Long Island, in New York.