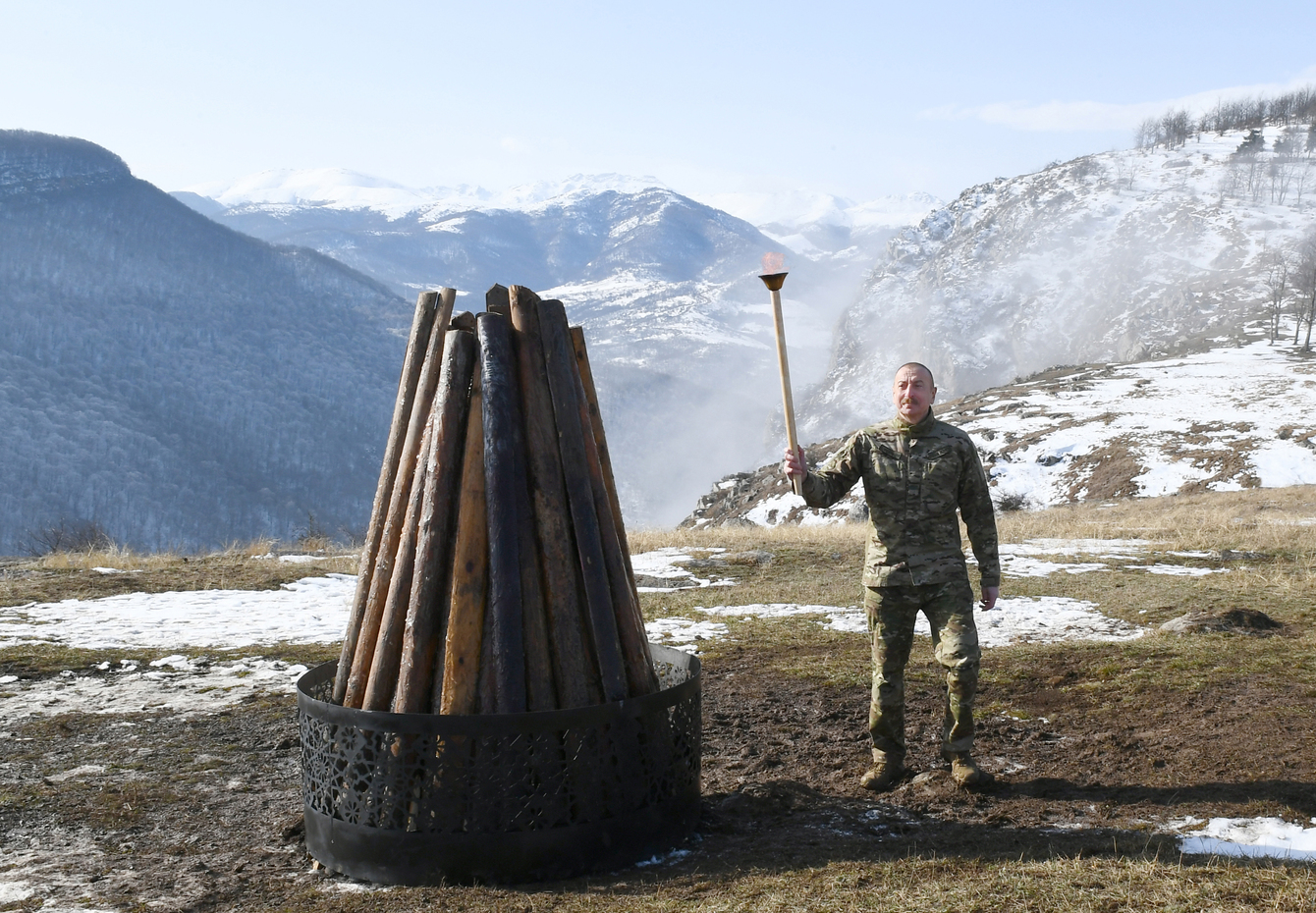 An ancient festival celebrating the arrival of spring, the Novruz holiday has returned to the Karabakh region, an internationally recognized territory of Azerbaijan, after nearly 30 years of its illegal occupation by Armenia. The festivities included symbolic bonfire lit in the historical Azerbaijani lands.

This year, Baku, which is considered an epicenter of the annual Novruz celebrations in the country, gave way to Shusha, an Azerbaijani city in the country's Karabakh region. President Ilham Aliyev and his family welcomed Novruz in Shusha, also known as the cultural capital of Azerbaijan. Ten million Azerbaijanis saw the country’s president lighting the main holiday bonfire and delivering a traditional holiday speech far from Baku.

“This is a historic event. Every year since 2004, when congratulating the people of Azerbaijan on the occasion of Novruz, I was saying that we would return to our native lands,” the president said, according to a statement issued by the president’s official website.

Shusha was built during the reign of the Azerbaijani Karabakh khanate's Panahali khan in the 18th century. According to the historical sources, Panahali khan decided to build an "eternal and invincible fortress in a firm and impassable place in the mountains" given the unfavorable location of the previous castles. Construction of the city kicked off in 1752 at about 1,600 meters above the sea level in Karabakh and the capital of the khanate was moved to the city in 1756-1757. Shusha has long been one of the main administrative, economic and cultural centers of Azerbaijan since its establishment by indigenous Azerbaijanis.

Armenia occupied Shusha on May 8 in 1992 during the first war in the Karabakh region of Azerbaijan in 1991-1994. Around 25,000 ethnic Azerbaijanis living in the city and 31 surrounding villages were targeted by the mass ethnic cleansing policy pursued by Armenia.

The occupation of Azerbaijan's Karabakh region by Armenia came after both countries gained independence in 1991. Following the Soviet Union’s dissolution, Armenia launched a military campaign against Azerbaijan that lasted until a ceasefire deal was reached in 1994. As a result, Armenia occupied 20 percent of Azerbaijan’s internationally recognized territories, including the Nagorno-Karabakh (Daghlig Garabagh) region and seven surrounding districts. Over 30,000 ethnic Azerbaijanis were killed and one million were expelled from those lands in a brutal ethnic cleansing policy conducted by Armenia.

Also, Armenia tried to destroy traces of the Azerbaijani culture and history in the occupied territories. Cultural and historical monuments throughout the Karabakh region underwent falsification and alteration.

In his address to the people, President Aliyev said that Shusha was subject to destruction and devastation that was aimed at the Armenization of the historical Azerbaijani city during 28 years of occupation.

“They [Armenians] tried to erase the heritage of the Azerbaijani people in Shusha. But they failed,” the president said during his speech in Shusha. “Shusha did not give in. Shusha did not break. It preserved its dignity, protected the national spirit of Azerbaijan, and today, while in Shusha, we are witnessing this once again.”

The Azerbaijani army restored Azerbaijan’s sovereignty over the city on November 8 during the 44-day-long counter-offensive operations from September 27 through November 9, 2020. Azerbaijani forces liberated more than 300 settlements, including the cities of Jabrayil, Fuzuli, Zangilan, Gubadli, and Shusha, from nearly 30-year-long illegal Armenian occupation. The liberation of Shusha played a crucial role in the retreat of Armenia’s forces and cessation of hostilities in a ceasefire on November 10.

The war in the Karabakh region came to an end after Azerbaijan, Armenia and Russia signed a tripartite ceasefire statement on November 10. Armenia also returned the occupied Aghdam, Kalbajar, and Lachin districts to Azerbaijan as part of its obligations outlined in the truce.