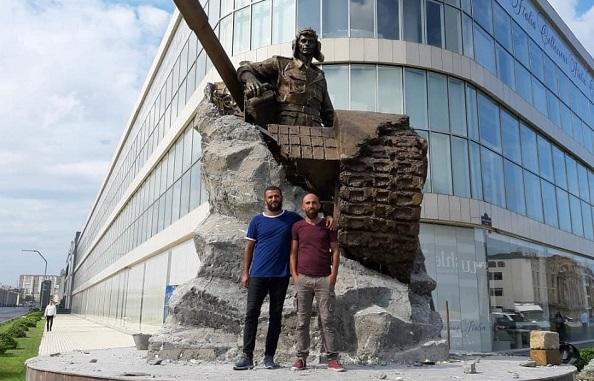 Created by Azerbaijani sculptors Rahib Garayev and Zamik Rzayev, the semi-bronze work reflects Albert Agarunov on his tank alongside a mountain. Sculptors pose in front of the monument, which has already been erected at the street named after him in Baku, but will be officially unveiled sometime in October. / Courtesy

The city of Baku will honor the memory of a Jewish national hero of Azerbaijan by unveiling a monument created in his honor and installed in one of the central districts of the capital.

The monument to the Karabakh war hero Albert Agarunov has already been erected at the street named after him in the Narimanov district of Baku, but will be officially unveiled sometime in October.

“Erection of a monument to national hero Albert Agarunov testifies to how the government and people of Azerbaijan respect their heroes,” a Jewish member of parliament, Yevda Abramov, said, according to Oxu.az.

Created by Azerbaijani sculptors Rahib Garayev and Zamik Rzayev, the semi-bronze work reflects Albert Agarunov on his tank alongside a mountain. A composition of a mountain made of concrete symbolizes the Nagorno-Karabakh region of Azerbaijan, in which Agarunov fought, and his military valor demonstrated in the mountainous city of Shusha, the historical center of the Nagorno-Karabakh region.

Albert Agarunov was born in Azerbaijan into a Jewish family living in the village of Amirjan in the suburbs of Baku. His military career started in the Soviet army, when Azerbaijan was part of the USSR until its collapse in 1991, where he has served as a tank commander from 1987-1989.

Agarunov, along with Agababa Huseynov, eliminated nine Armenian tanks and two armored trucks during battle in 1991. Using his own style of attack, known by his comrades as the Jewish Sandwich, Agarunov destroyed two more tanks in 1992. The tactic resembled the well-known “one shot, one kill” method, meant to destroy military vehicles of the enemy in a single fire. Armenians put a price on his capture due to his successes against Armenian forces, reportedly offering five million Russian rubles at the time.

On May 8, 1992, when Shusha was occupied by Armenia, Agarunov was killed by sniper fire while trying to move the bodies of his dead fellow soldiers from the battlefield.

The full-scale war lasted from 1991 until a ceasefire deal in 1994, and as a result, Armenia occupied 20 percent of Azerbaijan’s internationally recognized territory – the Nagorno-Karabakh region and seven surrounding districts. The bloody war claimed the lives of over 30,000 Azerbaijanis and expelled one million more from their homeland.

Agarunov was buried in the Alley of Martyrs in Baku’s Highland Park, and awarded the title National Hero of Azerbaijan posthumously in June 1992. In 2016, President Ilham Aliyev awarded him the Hazi Aslanov Medal.

Despite being a religious minority in a Muslim majority country, Agarunov felt deeply that he was Azerbaijani.

In an interview with ANS TV at the peak of the war in Shusha in 1992, Agarunov said “I live in this country. I was born here and I live here. Nothing than these forces me to defend Azerbaijan. [My civic duty] is to come and defend this country. And I will stay here till the end of the war.” 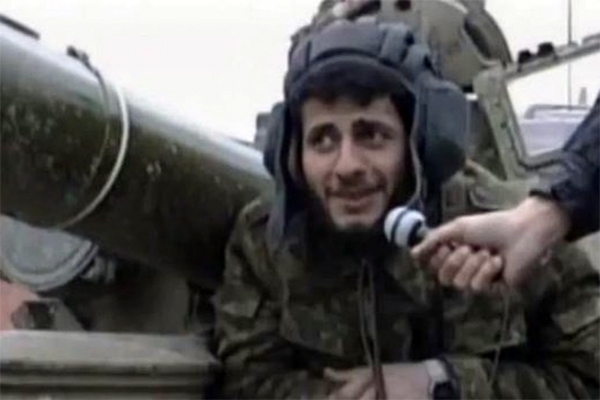 The monument to Agarunov to be unveiled next month comes after a school and street had been named after him, along with a memorial plaque that was installed in front of the house he once lived in the Amirjan settlement. Albert’s brother, Rantik Agarunov, who lives in Israel, told Trend that he and his sister and brother will travel to Azerbaijan to attending the unveiling.