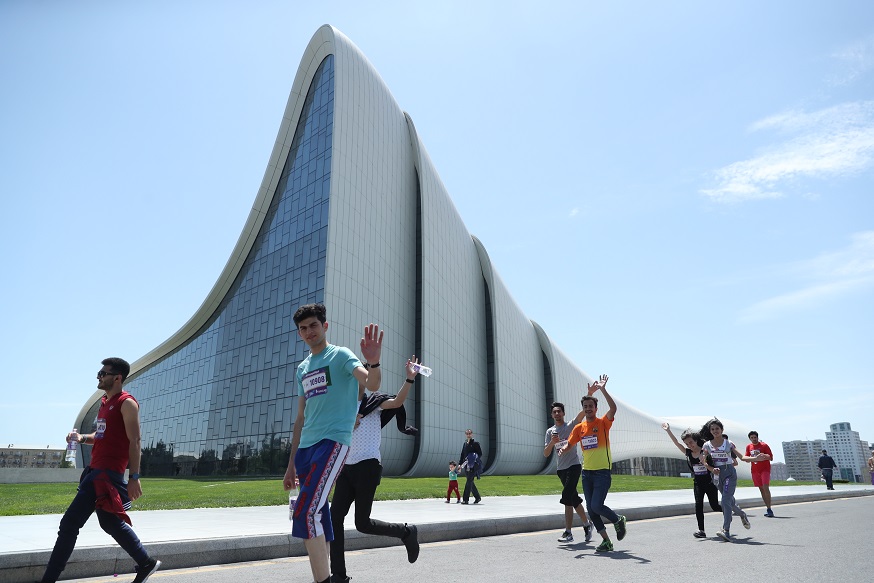 Runners cross by the Heydar Aliyev Center in the Baku Marathon 2019 on May 5. Over 15,000 participants, both locals, and tourists from the United States, Germany, Austria, China, Japan, Russia, Spain, the United Kingdom, and other countries joined the annual marathon in the capital city of Baku / Baku Marathon

Baku is the city where this year’s final game of the UEFA Europa League will be played on May 29, when the British football (soccer) teams Arsenal and Chelsea will be square off against one another.

Arsenal announced that it will not bring all of its players to Baku, namely Henrikh Mkhitaryan, who is of Armenian origin. Some fear for his safety, considering that Armenia and Azerbaijan are archrivals and have a history of going to war with one another. Mkhitaryan has been removed from the confirmed squad list after the team cited security risks.

Armenia and Azerbaijan, two post-Soviet countries and neighbors in the South Caucasus, have been at odds for almost three decades because of the conflict over the Nagorno-Karabakh region which is an internationally recognized part of Azerbaijan, but has been occupied by Armenia since the early 1990s.

Mkhitaryan’s safety has been raised in the media but officials in Azerbaijan disagree with their assessments. A statement from the foreign ministry made on Tuesday stating that the security of everyone participating in the match will be ensured.

“Azerbaijani side provided information that it will ensure the full security of all players who will participate in the final game of the UEFA Europa League in Baku on May 29 of this year, including the player of the Arsenal football club H. Mkhitaryan, as well as all the fans,” the ministry’s spokesperson Leyla Abdullayeva said in the statement.

“Personally, as a representative of the Ministry of Foreign Affairs, answering questions regarding this, I have repeatedly stated that Azerbaijan does not match sport with politics. This is not the first time that Azerbaijan hosts significant sporting events, and athletes of Armenian origin also participated in many sports competitions held so far in the country's capital.”

Mkhitaryan will reportedly miss the match against Chelsea, to be held on May 29. The decision to not play was a personal one, according to reports that state he made the decision with his family.

The Association of Football Federations of Azerbaijan voiced its disappointment over the decision of the Armenian player, saying all the necessary guarantees were provided for his personal security.

“We are disappointed to see the statement from Arsenal that Henrikh Mkhitaryan will not be traveling with his team to Baku to participate at the UEFA Europa League final against Chelsea next Wednesday,” AFFA said in an official statement on Tuesday. “We very much regret this unwarranted decision taken, as we understand, collectively by Arsenal, the player, and his family.”

“Whilst we recognize the right to make a personal decision not to travel, we would like to reiterate that as the host country Azerbaijan has provided all the necessary guarantees required by UEFA to ensure the personal safety of Mr. Mkhitaryan. There is no reason whatsoever to put in question the seriousness of these guarantees provided by Azerbaijan.”

Mkhitaryan would not be the first Armenian athlete to come to a sports competition in Baku. Eighteen sportsmen from Armenia traveled to Baku to participate in the First European Games, which took place in 2015. Migran Arutunyan won a silver medal in men’s Greco-Roman wrestling. Gevorg Manukian, an Armenian-descent wrestler representing Ukraine in European Games, received his silver medal personally from the country’s president, Ilham Aliyev. In a post-awards interview, Arutunyan thanked the people of Azerbaijan for their good behavior toward Armenian athletes.