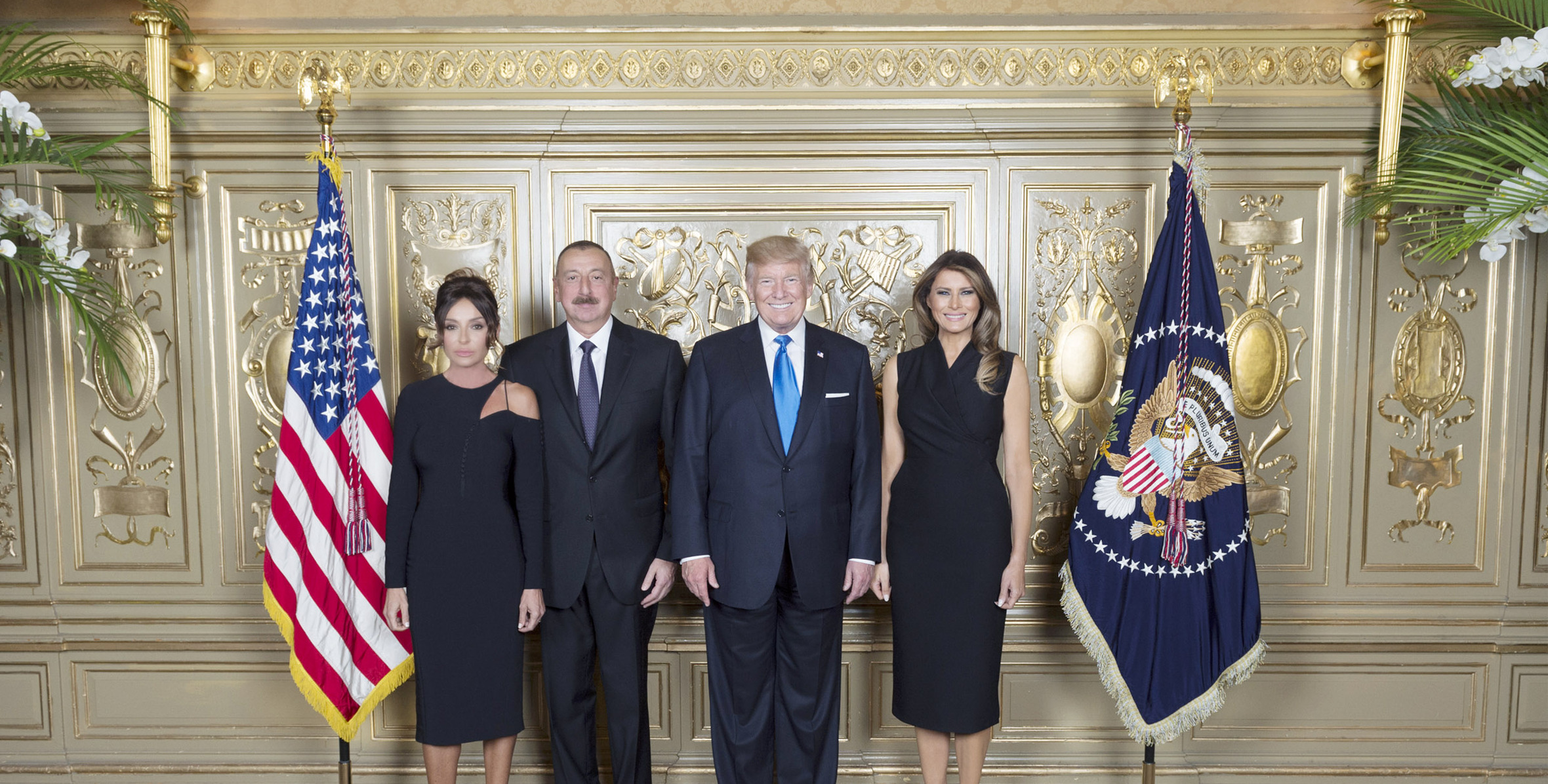 President of Azerbaijan Ilham Aliyev and the country's First Lady Mehriban Aliyeva met with President Donald Trump and the First Lady of America Melania Trump in a reception hosted by the American president in connection with the 72nd Session of the UN General Assembly in New York, September 20, 2017 / President.Az

The Second Caspian Business Forum, organized by the Caspian Policy Center in New York, held earlier this week put the relationship between the United States and the Caspian Sea region’s nations, including Azerbaijan, under the spotlight, as opportunities to reshape the business and investment climate in the region were discussed.

Azerbaijan’s foreign minister, Elmar Mammadyarov, said in his remarks given at the event that Azerbaijan has proven itself to be a trustworthy regional partner to the United States since the nation became independent following the collapse of the Soviet Union in 1991.

“For the last three decades, Azerbaijan has been a reliable and credible partner of the United States in the region, including our strategic engagement in the fields of energy security, fight against terrorism and transnational threats,” Mammadyarov said on Wednesday, according to a transcript of his remarks posted to the foreign ministry’s website.

“Azerbaijan, as a natural bridge between Asia and Europe, is a key country providing U.S. connectivity to Central Asia and Afghanistan, as well as the largest trade partner of the United States in the South Caucasus.”

Bilateral trade between the U.S. and Azerbaijan increased by 10 percent since 2017, to reach $860 million in 2018, according to the minister. Investments made by more than 250 American businesses in what is the largest economy in the South Caucasus region has totaled more than $10 billion since the country became independent nearly three decades ago. At the same time, the influx of money from the Azerbaijan State Oil Fund (SOFAZ) into the fixed income, equities and real estate markets of the U.S. totaled $8 billion during the same period.

American businesses made great inroads into the Azerbaijani economy with the signing of what had been dubbed “the Contract of the Century” (CoC) in 1994, which unleashed the oil and gas-rich nation’s economic potential, spurring an investment boom in what was a budding post-Soviet economy. What was a production sharing agreement defined the joint development and exploration of oil reserves in the Caspian Sea and within Azerbaijan’s territories, namely the Azeri, Chirag and Deepwater Gunashli oilfields (ACG). The agreement involved a consortium of 12 leading oil companies, including five American companies: AMOCO, UNOCAL, Exxon, McDermott and Pennzoil.

“Major U.S. oil companies, among other Western majors, were part of the initial consortium for production sharing under the CoC. The new contract on the extension of ACG till 2049 [was] signed in 2017. As part of the contract, U.S. companies Chevron and Exxon got over 16 percent of shares in ACG Consortia,” Mammadyarov said at the forum.

Rich fossil fuel reserves beneath the Caspian Sea, including natural gas, are helping supply Europe, where demand outpaces domestic supplies, and reduce the continent’s dependence on Russia for oil and gas. The U.S. government, allied in many ways with Europe, is an advocate for the development of Azerbaijan’s resources for export to Europe.

Washington has repeatedly expressed its support for the Southern Gas Corridor (SGC), for example – a large underwater and land gas pipeline that stretches from the western shores of the Caspian Sea in Azerbaijan to the eastern shores of southern Italy. The corridor, comprised of three segments, will pump 10 billion cubic meters (bcm) of gas annually to Europe starting sometime next year, supplying roughly 10 million households. The corridor is also supplying Turkey with an additional six bcm of natural gas per year.

In a letter to his Azerbaijani counterpart Ilham Aliyev in May 2018, President Donald Trump voiced his support to the corridor. Later, in December of the same year, the U.S. Congress passed a resolution to promote the role of the Southern Gas Corridor in Europe’s energy security policy, while standing firm against the construction of the underwater Nord Stream 2 gas pipeline in the Baltic region by Russia.

The resolution stated, “it has been longstanding United States policy to support European energy security through diversification of supplies, such as the Southern Gas Corridor which will deliver Caspian Sea energy resources to Southern and Central Europe.”

Minister Mammadyarov noted in New York that a strong partnership with the United States has been critical in seeing that diversification.

“Diplomatic efforts of the U.S. and involvement of American companies, which contributed to the completion of Baku-Tbilisi-Ceyhan [oil] and Baku-Tbilisi-Erzurum [gas] pipelines, remain vital for the success of SGC as well,” Mammadyarov said.

“The U.S. sourced materials and U.S. employees and contractors are materially and deeply woven into the construction, development, and operation of these projects in Azerbaijan and Europe – including over 20 major third-party contractors.”