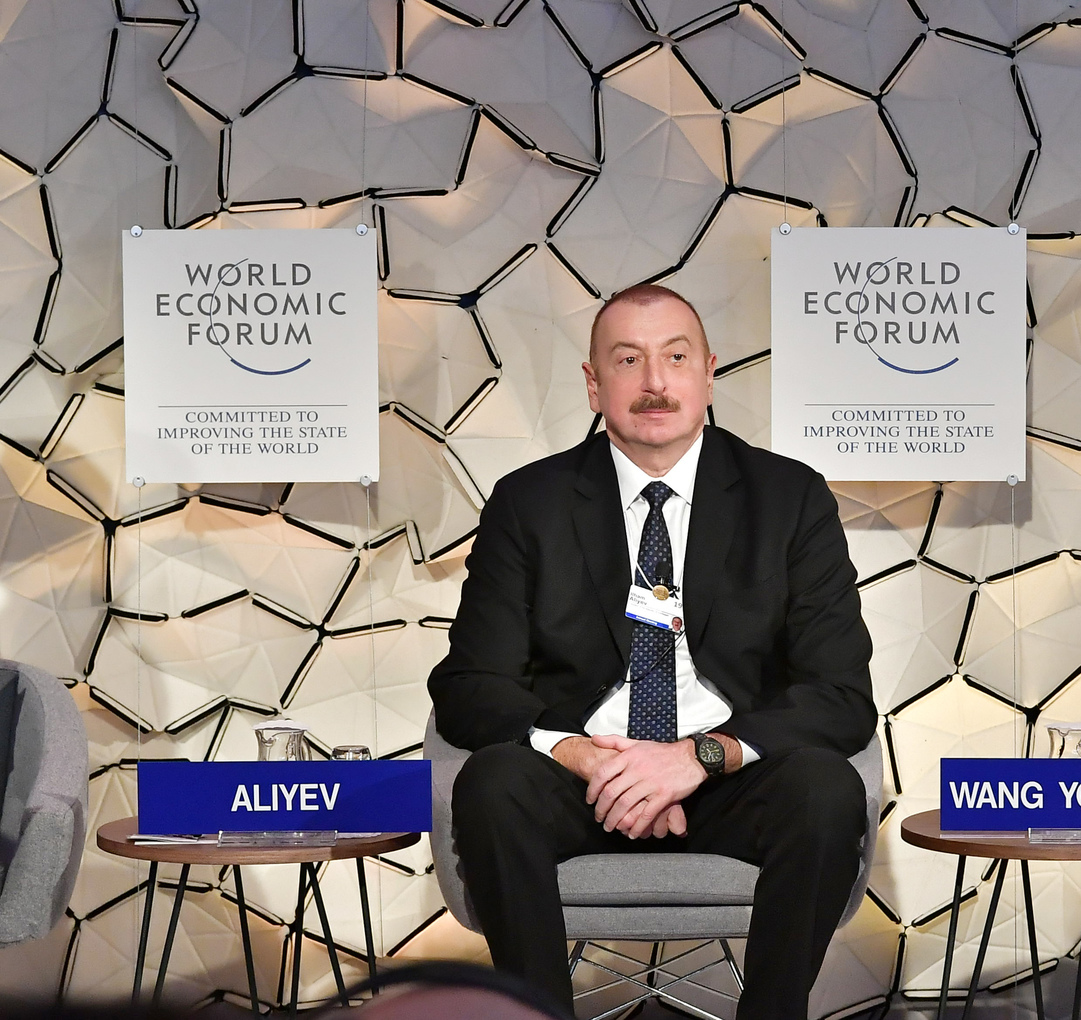 President Aliyev embarked on an official working visit to Davos on January 21 to attend the annual gathering of the World Economic Forum, January 22, 2019, Davos, Switzerland / President.Az

President Ilham Aliyev drew parallels between the economic growth of Azerbaijan and the resolution of the Nagorno-Karabakh conflict in an interview with the Chinese television channel CGTN, which took place in the Swiss resort town of Davos on Tuesday. President Aliyev emphasized the importance of infrastructure projects and economic growth, saying they can help bring an end to more than a quarter of a century of Armenian occupation of Azerbaijani territories.

“I am sure that this is one of the most effective ways to liberate our lands, which have been under occupation for more than twenty years,” President Aliyev told CGTN according to his official website President.az. “In the first years of independence, we were subjected to aggression and occupation by Armenia.”

“As a result, more than a million Azerbaijanis became refugees and internally displaced persons,” President Aliyev said, noting that “twenty percent of our lands are under occupation” as a result of Armenian aggression towards the country shortly after the collapse of the Soviet Union in 1991. Since that time Nagorno-Karabakh region and seven surrounding districts – altogether comprising roughly 20 percent of Azerbaijan's internationally recognized territory – are occupied by Armenia.

“Despite four resolutions adopted by the UN Security Council twenty-five years ago, demanding the immediate and unconditional withdrawal of Armenian troops from our lands, they are not being implemented.”

President Aliyev was in Davos on January 21-23 for attending the annual gathering of the World Economic Forum, this year taking place from January 22-25. During his interview with CGTN, the Azerbaijani president discussed what Azerbaijan has done, is doing and will do for keeping its commitments in terms of boosting national economic growth and contributing to international projects. President Aliyev identified Azerbaijan’s efforts to build a stronger economy as a significant factor that can give momentum to find a durable solution to the Armenia-Azerbaijan Nagorno-Karabakh conflict.

“We need to be stronger, more successful and more effective in order to restore our territorial integrity and return over a million people to their homes. Therefore, the policy of self-sufficiency and reliance on our own resources and reserves lead us to success. We have invested heavily in military capabilities and created a very successful format of cooperation with our neighbors,” President Aliyev told CGTN.

“If the occupation is ended, then, of course, in our region there would be greater international cooperation and sustainable peace.”

Armenian troops violate the 1994 ceasefire deal on a daily basis, notably along the Line of Contact that separates the two armies, keeping the region on edge while setting the grounds for a possible resumption of large-scale hostilities once more.

In Davos on Tuesday, President Aliyev spoke with Armenia’s Prime Minister Nikol Pashinyan. While the details of the meeting were not disclosed, a report on the Azerbaijani president’s official website states that the two sides exchanged views on the current situation and the status of what is a protracted negotiating process.

Political analyst Gabil Huseynli, who acted as a government advisor under former President Heydar Aliyev, highlighted the Aliyev-Pashinyan meeting as an important opportunity for both leaders to get to know one another.

“In my opinion, it was possible to get a more comprehensible idea of the positions of the parties, and the sides conveyed their views to each other. This is necessary for both sides,” Huseynli said, according to Baku Post.

“In the future, this can also play an important role in building mutual trust between the parties. In such a meeting, the parties are able to get to know each other more, and certain nuances arise in the parties' point of views. Thus, due to these nuances, future contours of negotiations will be somewhat drawn.”