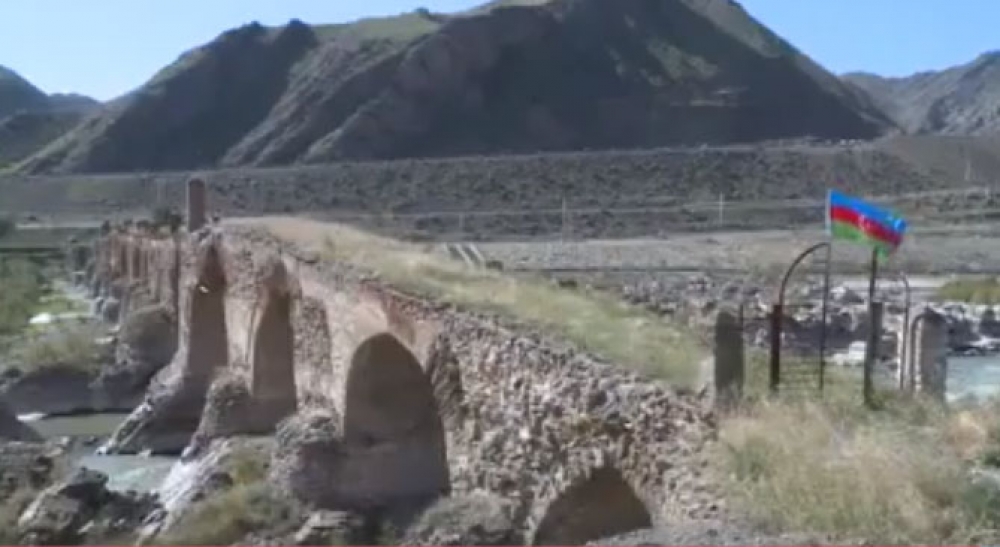 The armed forces of Azerbaijan have liberated more territories of the country from Armenia's occupation as part of the counter-offensive campaign kicked off last month to suppress Armenia’s armed attacks.

President Ilham Aliyev announced Monday about the liberation of 13 more villages in the district of Jabrayil, after 27 years of Armenia’s occupation in 1993.

Earlier on Sunday, President Aliyev has made public the raising of Azerbaijani flag on the ancient Khudafarin arch bridge that spans over the Araz river in Jabrayil to connect Azerbaijan with Iran. Two separate Khudafarin bridges with 11 and 15 arches have been built respectively in the 11th and 13th centuries. The historical bridges suffered seriously from Armenia’s cultural vandalism after the occupation in 1993.

The fighting between Armenia and Azerbaijan sparked after Armenia targeted Azerbaijani positions and civilian settlements on September 27. The uninterrupted bombardment triggered immediate counter-attack measures from the Azerbaijani military to push the Armenian offensive back.

Currently, military operations are being conducted in the territory of Azerbaijan, marking the fighting most intense between Armenian and Azerbaijani forces since a ceasefire that was reached in 1994.

Armenian authorities have so far confirmed 729 deaths among their servicemen. Azerbaijan’s Defense Ministry, however, claimed at least 2,300 killed and wounded servicemen on Armenia's side.

At the same time, Azerbaijan’s government has not revealed the number of military losses, but dozens of civilians in Azerbaijan were killed throughout the ongoing hostilities. The Prosecutor General’s Office in Baku confirmed 61 deaths and 282 injuries among civilian population. Over the past weeks, Armenia launched three ballistic missile attacks on Ganja, the second-largest city of Azerbaijan situated as far as 60 kilometers from the frontline. The last attack took place at midnight on October 17, killing 13 and injuring 53 peaceful residents of the city.

Along with Monday’s successful operations, the Armed Forces of Azerbaijan managed to liberate the cities of Jabrayil and Fuzuli, the settlements of Sugovushan (formerly Madagiz) and Hadrut, a total of 69 villages in Fuzuli, Jabrayil, Terter, and Khojavand districts as well as several strategic heights, including Murovdagh, in the occupied territories to date.