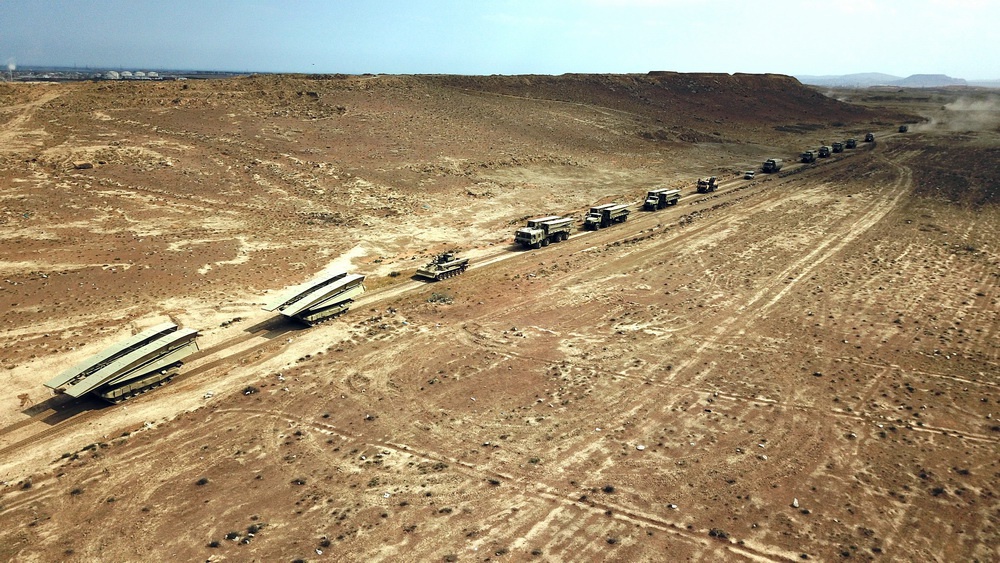 A photo from the military exercises of the Azerbaijani Armed Forces conducted in May, 2019 / Azerbaijan Defense Ministry

Azerbaijan is keeping its armed forces combat-ready, kicking off military drills next week that will involve thousands of personnel and hundreds of pieces of military equipment.

The five-day operational-tactical exercises will start on Monday and wrap up on September 20. Aimed at increasing the army’s capabilities to organize and conduct counter-offensive operations in difficult terrains, the defense ministry says that delivering preventive strikes will be rehearsed.

“Around 10,000 military personnel, more than 100 tanks and armored vehicles, 120 missiles and artillery systems of different caliber, multiple rocket launchers, and mortars, as well as 20 army and frontline air corps and multiple-purpose unmanned aerial vehicles, will be involved in the drills,” read a statement published to the ministry’s website on Friday.

As part of the full-scale drills, troops will ensure interoperability and coordination of strike teams of the frontline and bypassing units with main attack forces, as well as with artillery, aviation and other elements of battle formation. The main phase of the exercises will be centered on improving the troops’ control skills, along with issues concerning combat and moral-psychological readiness of the army, as well as logistics support to troops during a war.

The last time the Armed Forces of Azerbaijan gathered for military exercises was from May 20-24, when up to 10,000 personnel, more than 100 tanks, and 120 missile and artillery complexes took part.

Military readiness is considered pivotal for the armed forces in the face of what are constant ceasefire violations by Armenia's troops that are stationed along the Line of Contact that separates Azerbaijani forces from Armenian troops stationed in what is internationally recognized as Azerbaijan's territory. Over the last two days, for example, Armenia's forces stationed in the occupied territories of Azerbaijan fired at Azerbaijani positions more than 40 times, according to the defense ministry.

Armenia and Azerbaijan, once two of the 15 Soviet republics, went to war following the dissolution of the USSR in 1991. Armenia began an all-out military campaign against Azerbaijan to capture the Nagorno-Karabakh region of Azerbaijan, which had been partially populated with ethnic Armenians living alongside indigenous Azerbaijanis, sparking what was a three-year bloody war that ended only with a ceasefire in 1994.

As a result of the full-scale war, Armenia forcibly occupied 20 percent of Azerbaijan's internationally recognized territory, which includes the Nagorno-Karabakh region and seven adjacent districts. The war claimed the lives of over 30,000 Azerbaijanis and expelled one million more from their homeland. In 1993, the United Nations Security Council passed four legally binding resolutions demanding Armenia to pull its armed forces back from the occupied territories, but all four go unfulfilled to this day, which makes the resumption of war very real.

Today, Azerbaijan has the strongest military and the largest military budget in the South Caucasus region, ahead of its neighbors Georgia and Armenia. The government allocated $2 billion for it in 2019, which is $78 million or 4.6 percent more than in 2018. Military expenditures make up 13.4 percent of this year’s $14.8 billion overall state budget.

In Global Fire Power’s publicly available data, Azerbaijan ranks 52 for its military strength, while Georgia comes in at number 85 and Armenia stands at 96.