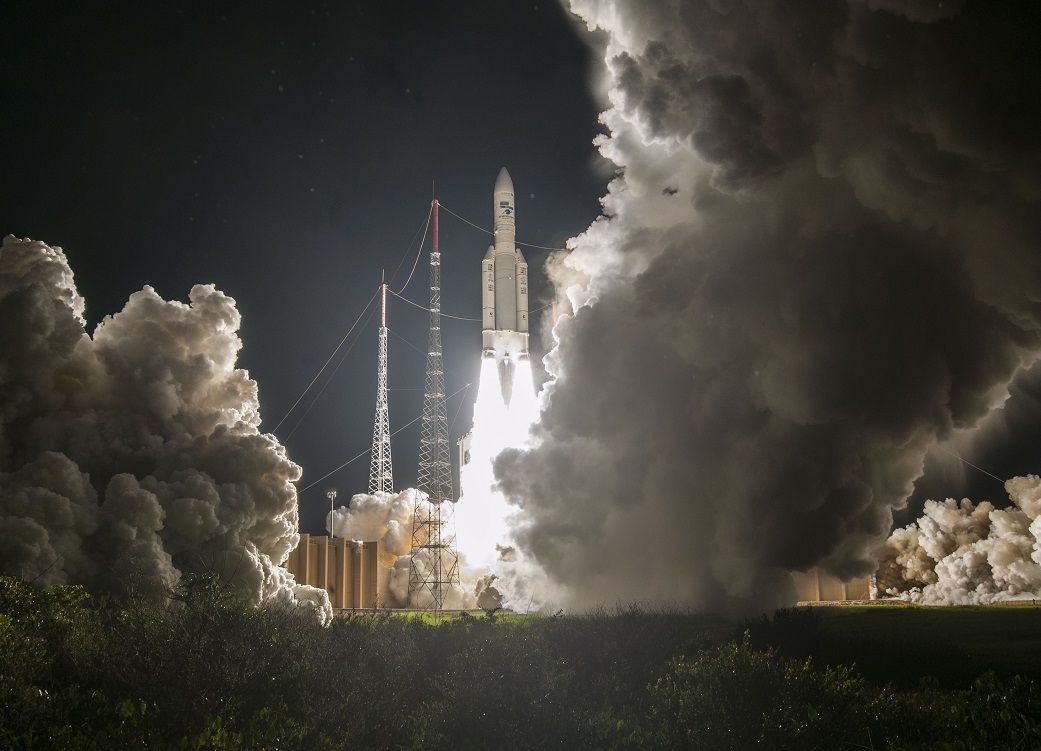 On Wednesday, from the Guiana Space Center in South America, the French space transportation company Arianespace launched Azerspace-2 high into the sky and into orbit, at 02:38 a.m. Baku time.

“Azerbaijan has managed to put three satellites into orbit in the past five years,” President Ilham Aliyev said in a televised address to the nation on Wednesday, during which he referred to the launch of Azerspace-2 as “another triumph” of Azerbaijan.

The telecommunications satellite ejected from the Ariane 5 ECA rocket carrier after 42 minutes into its flight according to a statement released by Azercosmos State Agency.

“Azerbaijan is today a member of the space club and is strengthening its standing in the world space industry. We already have three satellites: Azerspace-1 telecommunications satellite, Azersky observation satellite and Azerspace-2,” President Aliyev said in his address.

Azerspace-1 went into orbit in 2013, and has a lifespan of 15 years. Through Azerpsace-1, fifty countries in Central Asia, Europe, Africa and the Middle East benefit from better telecommunication connectivity.

The surveillance and oversight satellite known as AzerSky went into operation two years later, and provides services in the fields of defense, security, emergency situations, maritime navigation, mapping and tourism. The equipment, which is used by Google, is capable of photographing six million square kilometers of territory per day.

Azerspace-2 is expected to last until 2038. Designed and built by Space Systems/Loral in California, the newly launched equipment will begin commercial operations under Azerbaijan’s state-run Azercosmos in January. The satellite will allow for 10 million customers throughout the Caspian region, Central Asia, Europe, South Asia, the Middle East and sub-Saharan Africa to receive highly reliable broadband and broadcast solutions, enhanced capacity, coverage and service offerings.

“[Azerpsace-2] will further expand the service currently available from Azerspace-1. The satellite will also enable us to provide more reliable service by serving as back-up for Azerspace-1, located at 46 degrees East, which is only one degree away from Azerspace-2,” Azercosmos CEO Rashad Nabiyev said, according to Intelsat.com.

Azerspace-2 will boost Azercosmos’s service capacity for meeting the growing demand for direct-to-home (DTH) television, government, and network services in a greater region from Europe to Middle East and Sub-Saharan Africa. Africa will receive high-power Ku-band connectivity, thanks to its operation.

“Azerbaijan is today exporting its products, and currency is flowing to Azerbaijan thanks to the operation of the satellites. Azerbaijan's achievements in space industry are at the same time developing our non-oil sector and moving our non-oil industry forward,” President Aliyev said in his televised address.

Prior to the launch, 46 percent of the station’s capacity had been sold to the world's leading provider of satellite services, Intelsat. Payments under this deal will compensate 60 percent of the $190 million cost of the project. Over the estimated 20 years of operation, Azerspace-2 is forecasted to bring in $400 million for Azerbaijan’s economy.