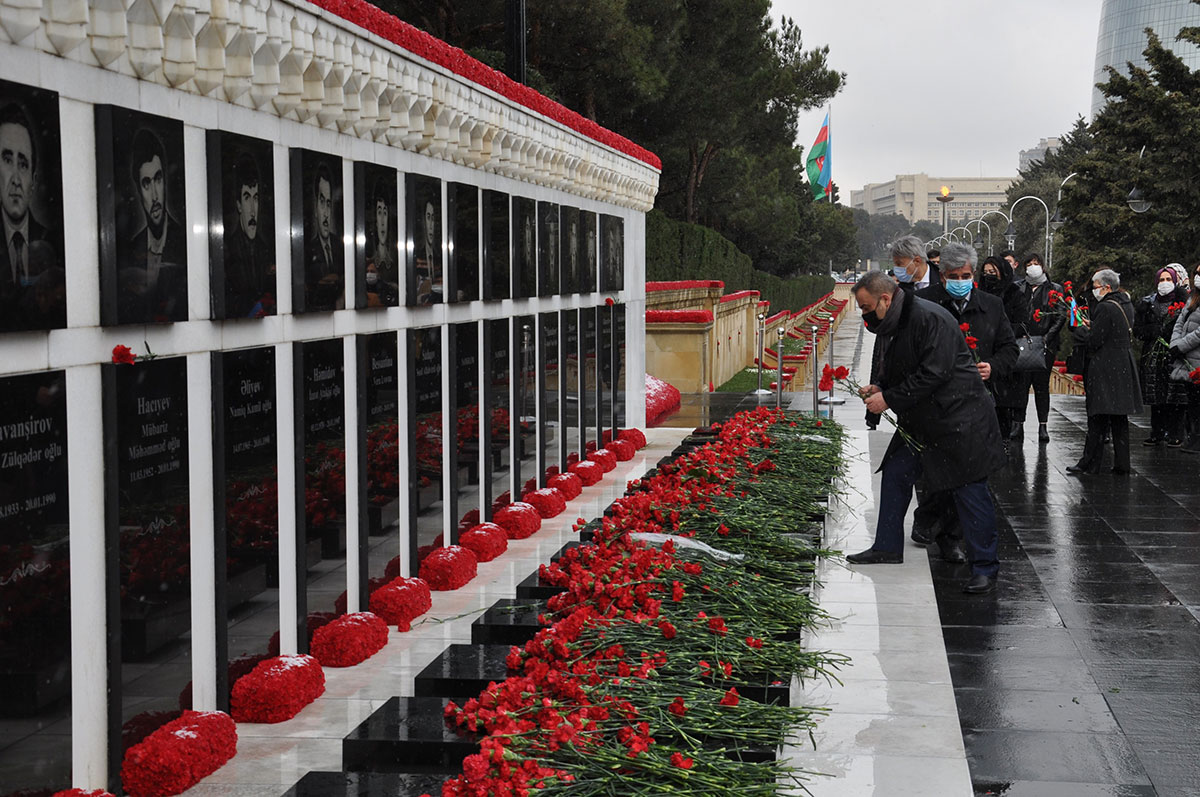 Tens of thousands of people pay homage to the victims of January 20 events at the Alley of Martyrs in the capital Baku on the commemoration day each year / Fhn.Gov.Az

Today, Azerbaijanis are marking the 32nd anniversary of "Black January", paying homage to the victims of Soviet repression that claimed more than 140 lives on January 20 in 1990. Since then, the date has been commemorated at the highest level every year in Azerbaijan.

“Over the night of 19-20 January 1990, by order of the USSR leadership, 26,000 Soviet troops invaded Baku, Sumgait, and other cities of Azerbaijan. As a result of this military intervention, 147 civilians were killed and 744 were seriously injured. This event went down in the history of modern Azerbaijan as "Black January",” reads a statement issued by the Foreign Ministry of Azerbaijan on Wednesday.

In the late 1980s, when the Soviet Union was in its twilight, Armenia decided to take advantage of the geopolitical situation. In 1988, Armenia, which was the Soviet republic established in the historical lands of Azerbaijan, expelled 250,000 Azerbaijanis from their homelands, the last portion of the Azerbaijani population who had remained there after the series of mass deportations of Azerbaijanis during the 20th century. At the same time, Armenia conspired to occupy the highland part of the Karabakh region, an internationally recognized territory of Azerbaijan which had been partially populated with ethnic Armenians living alongside indigenous Azerbaijanis.

As a result, hundreds of thousands of Azerbaijanis took to the streets in Baku in 1988 – 1989 demanding the Soviet authorities in Moscow to put a stop to Armenia’s illegal actions. Instead, the Soviet leadership turned a blind eye to these events and did nothing of that kind. The mass protests of Azerbaijanis in Baku against the policies of the Soviet Union turned into an independence movement for Azerbaijan.

In early 1990, Armenia’s parliament voted to include the highland part of the Karabakh region of Azerbaijan in its budget plans, disregarding Azerbaijani jurisdiction and revealing Armenia’s intent to annex the region. In the wake of the action, Azerbaijanis flocked to the streets in Baku again to express their mass protests against the Soviet Union’s policy towards the fate of Azerbaijan's Karabakh region.

By the bloody date, a 50-thousand army of the Soviet military troops and special forces had already surrounded Baku. On the night of January 19–20, 1990 – shortly before a state of emergency was declared – Soviet tanks rolled into Baku, destroying everything in their path. A total of 147 Azerbaijanis were killed in the incursion of the Soviet forces, and another 744 were injured. More than 840 Azerbaijani citizens were illegally arrested, while 200 houses and apartments were destroyed. In addition, 80 cars, including ambulances, were damaged. Pogroms continued in other cities of Azerbaijan, including Neftchala and Lankaran in the south, where eight people fell victim to the Soviet invasion on January 25 and 26.

"At noon on January 20, eighty-five bodies were brought to our morgue," said Fuad Aliyev, who worked as a doctor at one of the central hospitals in Baku when the bloody events took place. "Seventy-five of them were shot in the back, two died of blunt force trauma, six were crushed by APCs [armored personnel carriers], and two died of cut and puncture wounds. Six bullets were fired at one of the deads from close range. It is clear that the goal was to completely destroy these civilians."

For Azerbaijanis, January 20 symbolizes the heroism of the nation in addition to the tragic events that occurred that day in history. Azerbaijanis believe that the resistance movement led to regaining the country’s independence from the Soviet Union a year later in 1991. Every year on January 20, millions of people visit the Alley of Martyrs, a cemetery where the victims of the tragic, yet heroic day are buried, to honor the memories of the founders of independence.

Being a gross violation of the Universal Declaration of Human Rights, the International Covenant on Civil and Political Rights and other international legal documents and one of the most serious crimes of the 20th century by its essence and scope, these events have not yet received international political and legal assessment, according to the Foreign Ministry of Azerbaijan. Baku is convinced that the tragic events of 1990 should be acknowledged as a crime against humanity and those ordered and perpetrated it must be held accountable.

“There were similar confrontations in Baltic states and Georgia; however, the events in Azerbaijan were larger and more brutal in comparison to others,” Ikram Aghasiyev, a historian at the Azerbaijan National Academy of Sciences told Caspian News. “The goal was to intimidate other nations under the decaying Soviet rule.”

“Our people won the fight. So, January 20 events should not be recalled as a tragedy anymore today. This is a page of heroism in our history. People’s bare hand resistance against armed soldiers and tanks is a real proof of valor.” 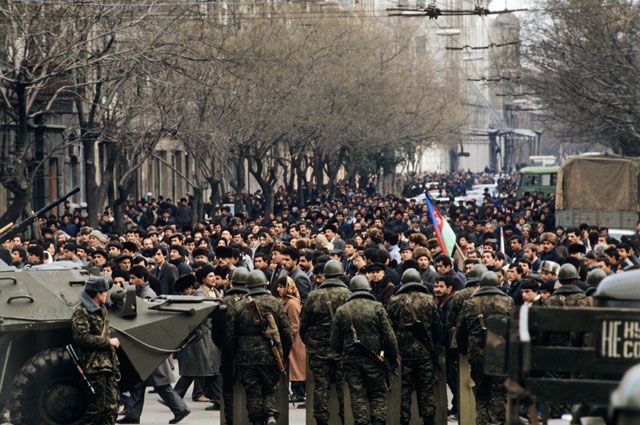 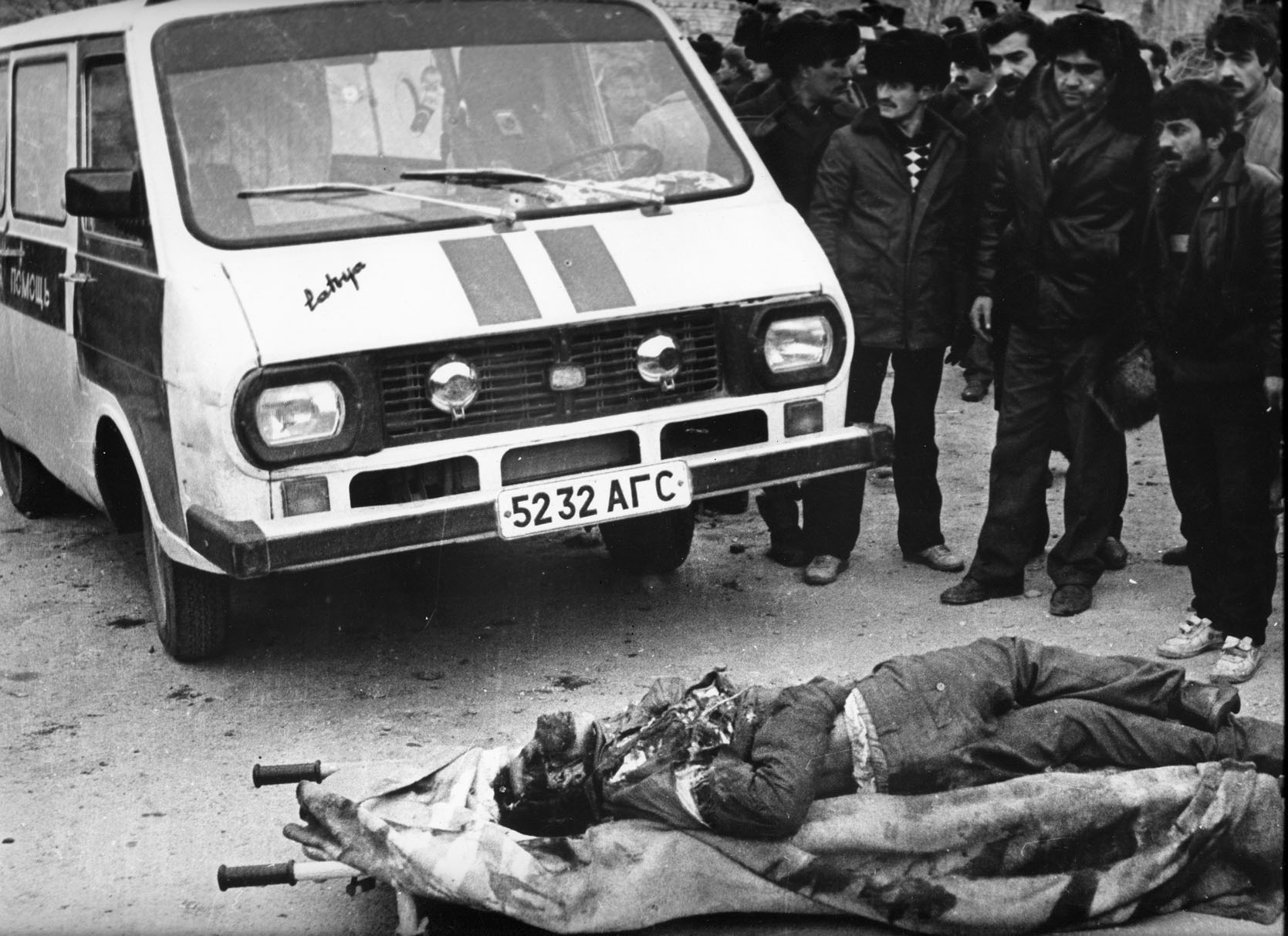 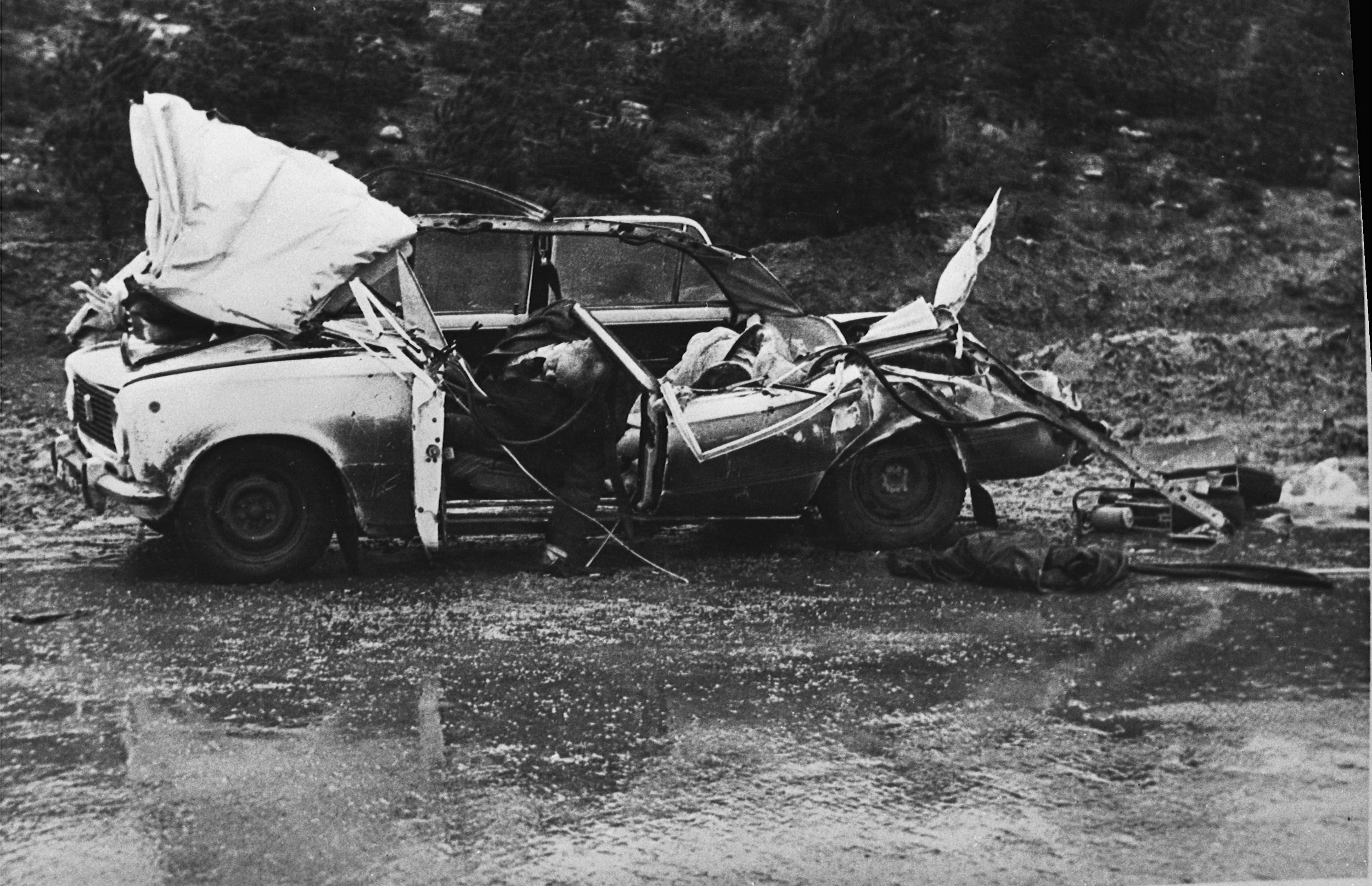 One of the multiple passenger cars destroyed by the Soviet military equipment, January 20, 1990 / Courtesy