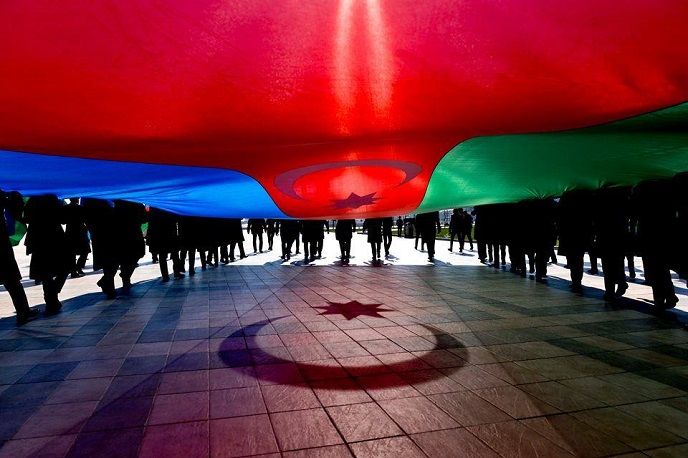 In 1989, hundreds of Azerbaijanis flocked from Nakhchivan, an exclave to the southwest of the country’s mainland and bordered by present-day Armenia, Iran and Turkey, and dismantled security wires along the Iranian border in a sign of protest against years of separation

Around 50 million Azerbaijanis across the world, from the Americas to Australia, are ready to stand together and celebrate International Solidarity Day of Azerbaijanis.

Today marks Solidarity Day, a national holiday in the predominantly Turkic nation located in the South Caucasus, south of Russia and north of Iran, held each December 31. On this day Azerbaijanis celebrate the events, when in 1989 Azerbaijanis living in what was then the Soviet Union and Iran had ended decades of separation and united with their relatives.

In 1989, hundreds of Azerbaijanis flocked from Nakhchivan, an exclave to the southwest of the country’s mainland and bordered by present day Armenia, Iran and Turkey, and dismantled security wires along the Iranian border in a sign of protest against years of separation.

Today roughly 10 million Azerbaijanis live in the Republic of Azerbaijan, the successor to the Azerbaijan Soviet Socialist Republic and the Azerbaijan Democratic Republic – the first independent Azerbaijani Republic that existed for a brief period following the fall of the Russian empire in 1918 and before the Red Army marched southward in April 1920.

The largest number of Azerbaijanis living outside of the Republic of Azerbaijan today is in Iran, which accounts for up to 30 million, according to different sources. Turkey comes in at number two, with 3.3 million; and two million reside in Russia according to data compiled by the State Committee of Azerbaijan for Working with Diaspora.

Around a half a million Azerbaijanis live in Georgia, and almost the same number reside in the United States. Germany, the United Kingdom, Ukraine, Canada, Israel, France, Sweden, the Netherlands, Kazakhstan, Uzbekistan, Turkmenistan, Iraq, Syria, China, Japan and Australia are home to more than two million Azerbaijanis combined.

“We have never fallen apart, we are always together in our hearts and minds,” Pasha, an Azerbaijani living in Georgia, told Caspian News. “There is a strong bond among hundreds of thousands of Azerbaijanis living here. We feel always ready to help each other, share each other’s good and bad days. This is how we keep our solidarity soul alive far from the motherland,” he said, adding that he plans to travel to Azerbaijan on the eve of Solidarity Day to celebrate it and New Years with friends and family.