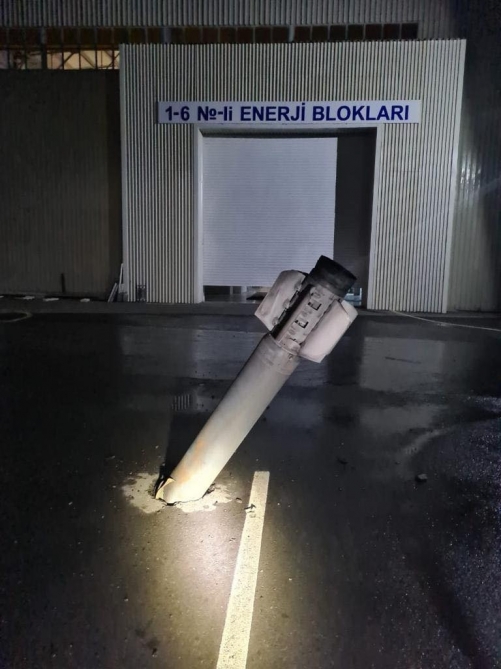 On the evening of October 4, the Armenian armed forces launched a missile attack against the Azerbaijani industrial city of Mingachevir, which plays a key role in the country, due to its reservoir and key power plant. / Azertag

“Proof of Armenia's deliberate and targeted attack against critical civilian infrastructure of Azerbaijan. The missile landed in close proximity to the energy block in Mingachevir. But did not explode,” Hikmet Hajiyev, Assistant of the Azerbaijani president and Head of Foreign Policy Affairs Department of the Presidential Administration tweeted on the evening of October 4.

In another tweet, Hajiyev said that “no serious damage to infrastructure. But civilians wounded. Armenia's state terror & environmental terror continues."

Earlier, Armenia's Defense Ministry said it had not ruled out the use of Iskander ballistic missile complexes against Azerbaijan as clashes between the two countries raged on along the front zone in the Nagorno-Karabakh region, an internationally recognized territory of Azerbaijan, which remains occupied by Armenia. In addition, Armenia’s Ambassador to Russia, Vardan Toghanyan, told Russian state news agency RIA Novosti that in case of some circumstances "all measures will be taken, including the use of Iskander. That is, the Armenian armed forces will have to use all military arsenal."

During the deadly clashes between Armenia and Azerbaijan in July 2020, Armenia’s military threatened to hit Mingachevir - the fourth-largest city in Azerbaijan with a population of about 106,000. The city is located 323 kilometers from Baku and 17 kilometers from the Baku-Tbilisi railway. Geographically, the region is located in the center of the republic on both sides of the Kura River.

Today, the Armenian side shelled the central market of Ganja, as well as the residential areas in the districts of Aghjabadi, Fuzuli, Goranboy, Tovuz and Goygol, according to the Azerbaijani defense ministry.

A total of 25 civilians in Azerbaijan have been killed as a result of shelling of residential settlements by Armenian forces since September 27 until now, while 127 people have been injured, according to the press service of the Prosecutor General's Office. Furthermore, 56 civilian facilities and 313 houses have been seriously damaged.

“19 criminal cases have been launched in the relevant district prosecutor's offices over crimes committed against Azerbaijan by Armenia from September 27," the head of the press service of Prosecutor General's Office Gunay Salimzade said on October 5.

Clashes between Armenian and Azerbaijani forces along the Line of Contact erupted on September 27 after Armenia's forces deployed in the occupied Azerbaijani lands started shelling the military positions and civilian settlements of Azerbaijan. Azerbaijani troops took immediate counter-attack measures to push back against Armenia’s artillery offensive.

The occupation of Azerbaijan's Nagorno-Karabakh region by Armenia came after both nations gained independence following the Soviet Union’s dissolution in 1991. Armenia launched military campaign against Azerbaijan with the aim of occupying the Nagorno-Karabakh region. A large-scale war between the two countries lasted until a ceasefire deal was reached in 1994. As a result of the bloody war, Armenia occupied 20 percent of Azerbaijan’s internationally recognized territories – the Nagorno-Karabakh region and seven surrounding districts. Azerbaijan faced a humanitarian crisis during the war, in which 30,000 of its citizens were killed, while one million others were forcibly displaced from their homeland.