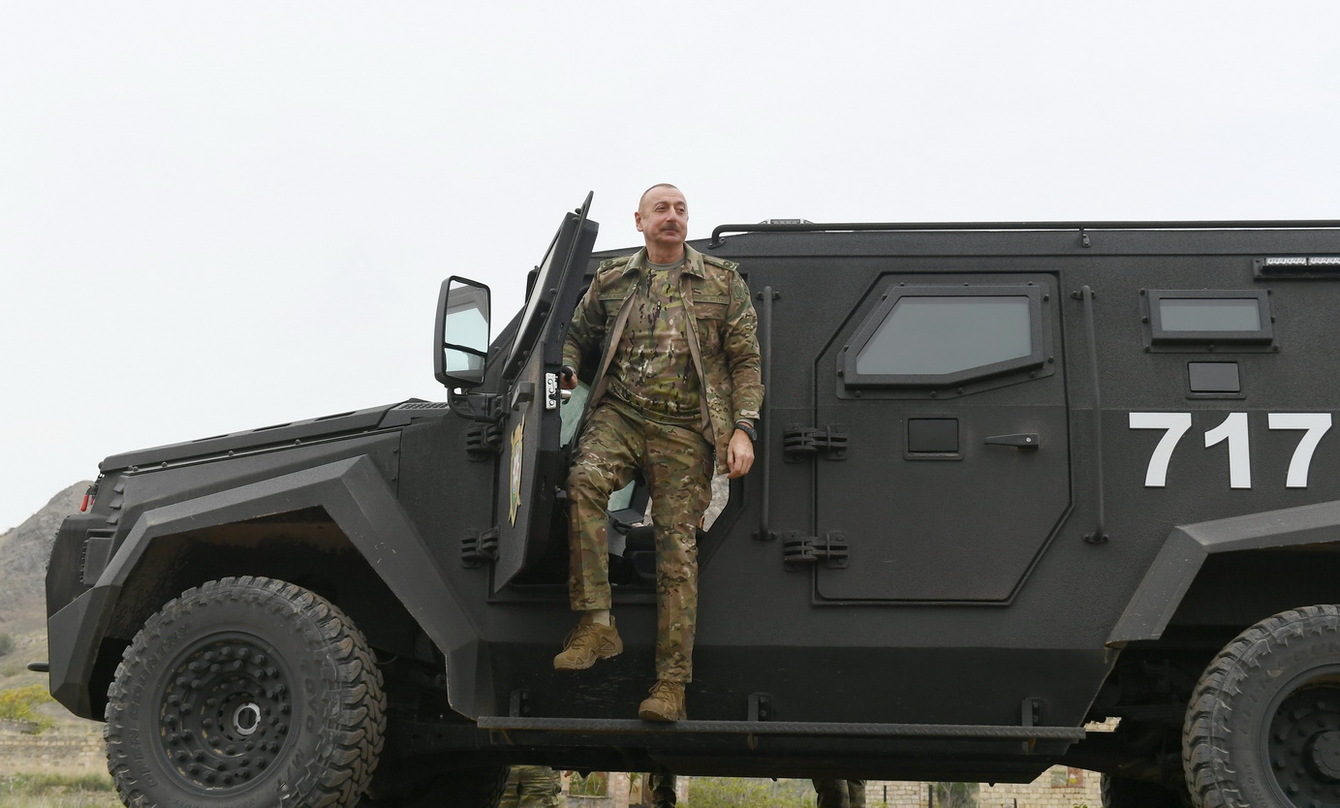 Azerbaijani President Ilham Aliyev gets off an armored car he steered in the liberated Fuzuli and Jabrayil districts of Azerbaijan, November 16, 2020 / President.Az

Azerbaijani President Ilham Aliyev and the country's First Vice-President Mehriban Aliyeva visited the liberated Fuzuli and Jabrayil districts, as well as the cities of Fuzuli and Jabrayil on Tuesday, a week after a trilateral ceasefire statement signed between Azerbaijan, Armenia and Russia ended fighting in the Karabakh region of Azerbaijan.

In Fuzuli, President Aliyev ordered the construction of a new highway that will connect to the city of Shusha in the Nagorno-Karabakh region of Azerbaijan. The State Agency of Azerbaijan Automobile Roads has already begun work on the project in the Alkhanli village of the Fuzuli district.

"This road is vital because this road leads us to Shusha – Karabakh's crown jewel. At the same time, this is the first project to be implemented in the liberated lands," President Aliyev said, adding the new highway will replace the traditional Aghdam-Khankendi-Shusha road, which is out of use for now.

Armenia's forces occupied a significant part of the district of Fuzuli, one of seven districts occupied along with the Nagorno-Karabakh region, on August 23 in 1993.

Azerbaijani armed forces regained control over the occupied parts of Fuzuli on October 17 throughout the recent military operations, known as the Second Karabakh War or the Patriotic War in Azerbaijan. The liberated city of Fuzuli resemble a "ghost town" with no signs of life. The occupation and subsequent vandalism acts by Armenia's forces left the area in ruins. President Aliyev vowed to restore the district after hoisting the Azerbaijani flag in the city center of Fuzuli.

"We will restore them all. Relevant instructions have been given, we will do everything in a planned manner, we have invited international experts, and they will come. We will assess all the damage together," he said. "After that, we will invite urban planning specialists – both Azerbaijani and foreign. They will come here, and a new urban plan will be introduced. Restoration of villages, cities, infrastructure, and environmental measures – all these plans are there."

Around 300 settlements of Azerbaijan, including the district of Fuzuli, were recently liberated from Armenia's occupation in a war that lasted for 44 days marking the largest clashes between the sides since the ceasefire in 1994. The fighting between the Armenian and Azerbaijani forces broke out on September 27 with Armenia's troops deployed in the occupied Azerbaijani lands began shelling heavily the military positions and civilian settlements of Azerbaijan. The attack prompted immediate counter-attack measures by the Azerbaijani army to push back Armenia's offensive.

The Azerbaijani army liberated five cities, including Fuzuli, Jabrayil, Zangilan, Gubadli and Shusha during the war. Liberation of Shusha city in the Nagorno-Karabakh region on November 8 and over 70 more settlements on November 9 led to an agreement that halted the battles on November 10. Azerbaijan, Armenia and Russia signed a trilateral statement, which halted military operations on both sides. The document obliged Armenia to return the occupied Kalbajar and Lachin districts, as well as the occupied parts of the Aghdam district to Azerbaijan by December 1. Russia has deployed a peacekeeping mission to safeguard the ceasefire in the region in line with the terms of the pact.

The ceasefire will reportedly be monitored from a special center in the territory of Azerbaijan. Russian and Turkish peacekeepers will be deployed in the center upon an agreement signed between Moscow and Ankara on November 11. Russian President Vladimir Putin said the government of Azerbaijan will decide about the location of the center. Meanwhile, the Turkish Parliament has Tuesday ratified President Recep Tayyip Erdogan's proposal to deploy Turkish troops in Azerbaijan for a peacekeeping mission.

President Aliyev's next stop in the liberated Azerbaijani lands was the district and city of Jabrayil, where he also visited the ancient Khudafarin bridge that connects Azerbaijan with Iran and raised the Azerbaijani flag. Two separate Khudafarin bridges with 11 and 15 arches have been built in Jabrayil in the 11th and 13th centuries. The historical buildings suffered serious damage from Armenia's cultural vandalism after the occupation in 1993.

In Jabrayil, President Aliyev showed ruins of the next "ghost town" destroyed by Armenia's forces. Except a newly built military unit, no building was seen to survive Armenia's invasion and acts of vandalism.

"They [Armenians] will be held accountable for this. They will answer in international courts. I have said before, but I want to say again that international organizations and experts will come here, and all the damage will be assessed. The damage inflicted in over 30 years will be calculated," the president said.

"They thought that the people of Azerbaijan would never return here after this destruction. They have destroyed it for that purpose. But they were wrong. We are back. Look, we are standing here, on our native land, in the city of Jabrayil. We will restore all these places."

Armenia and Azerbaijan have been locked in a decades-old conflict over the Nagorno-Karabakh region, which is the internationally recognized territory of Azerbaijan. Following the Soviet Union’s dissolution in 1991, Armenia launched a military campaign against Azerbaijan that lasted until a ceasefire deal was reached in 1994. Armenia occupied 20 percent of Azerbaijan’s internationally recognized territories including the Nagorno-Karabakh region and seven surrounding districts. Over 30,000 ethnic Azerbaijanis were killed and one million were expelled from those lands in a brutal ethnic cleansing policy conducted by Armenia.