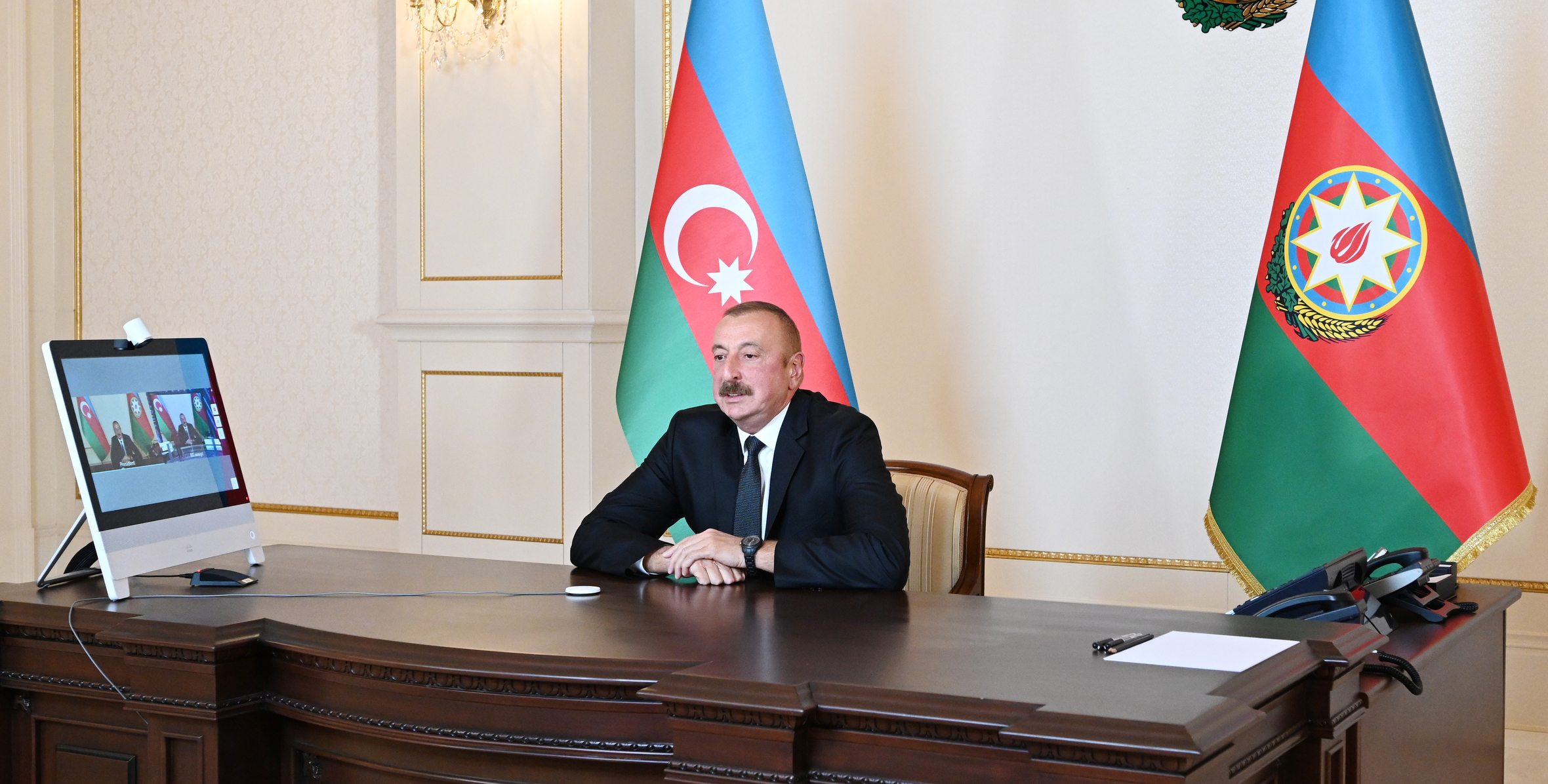 Azerbaijani President Ilham Aliyev says Armenia deliberately disrupted the negotiations and created obstacles by making unacceptable demands and undermining the format of negotiations that have already existed for over 20 years.

In an interview with political talk show "60 minutes" aired on Russia-1 TV Channel on Tuesday, Azerbaijani President Ilham Aliyev shared his views on the negotiations process over the Nagorno-Karabakh region, an internationally recognized territory of Azerbaijan.

While answering questions about the country's readiness to proceed towards the Kazan formula or any other formula to resolve the decades-long conflict, President Aliyev explained that "Azerbaijan has always shown constructiveness on the negotiation track" within the framework of the Organization for Security and Co-operation in Europe (OSCE) Minsk Group - a body set up in 1992 and co-chaired by France, Russia and the United States.

"In particular, in the past two years, we have repeatedly stated, both myself and other officials, that we are committed to the resolution principles developed over the years and which the Minsk Group and its co-chairs consider the basis for the negotiating process," said the president during the program, which was dedicated to the latest fierce clashes currently raging on between Armenia and Azerbaijan.

"Moreover, we have repeatedly stated in the past two years, and before that, we are committed to the negotiation format. Negotiations are underway between Armenia and Azerbaijan," he added.

President Aliyev blamed the Armenian prime minister for rejecting the principles developed by the OSCE Minsk Group. Pashinyan's provocative remarks and attempts to change the format of negotiations by involving the so-called puppet regime in the occupied Azerbaijani lands as a party in the negotiations thwarted all efforts of the world community to resolve the conflict peacefully.

The Azerbaijani president said Armenia deliberately disrupted the negotiations and created obstacles by making unacceptable demands and undermining the format of negotiations that have already existed for over 20 years.

In recent months, Armenia made a series of provocative moves against Azerbaijan, including sparking border clashes in July when Armenia's troops violated a ceasefire and attacked Azerbaijani positions with artillery fire.

"Before that, on July 12, our positions at the state border were attacked," the president said, referring to the border clashes in July.

The skirmishes marked the most intense border fighting between the two countries in last three decades, which has resulted in the death of 12 Azerbaijani servicemen, including a general, and one civilian who fell victim to mortar fire.

While bringing up the latest sabotage attempts initiated by Armenia, President Aliyev spoke about the capture of an Armenian military commander of a sabotage-reconnaissance group on August 23 during an operation to repel an attack on Azerbaijani positions in the western Goranboy district.

"Everything is being done to derail the negotiations, then accuse Azerbaijan, and then involve third parties, thereby undermining the talks. The reason is that the Armenian side wants to maintain the status quo," President Aliyev said.

"The co-chairs of the OSCE Minsk Group represented by the Presidents of Russia, France and the United States have repeatedly made statements that the status quo is unacceptable. And this means that the territories under occupation must be returned to Azerbaijan. We are committed to negotiations, but we see completely opposite actions from the Armenian side."

For the second time over the year, the region turned into a hotbed of heavy clashes on September 27 when Armenia's forces deployed in the occupied Azerbaijani lands shelled Azerbaijani civilian settlements and military positions along the front zone. The fierce fighting has been ongoing over the past five days. Azerbaijan did not report a number for military casualties, while civilian death toll is 19 along with 55 injured residents.

Armenia and Azerbaijan have been in conflict over the Nagorno-Karabakh region, which is internationally recognized as part of Azerbaijan. Following the breakup of the USSR in 1991, Armenia launched a military campaign against Azerbaijan to seize the region.

The countries fought a bloody war over the region in the early 1990s that lasted until a ceasefire agreement was reached in 1994. However, a peace treaty has not yet been signed due to Armenia's constant attempts to disrupt negotiations for the Nagorno-Karabakh conflict. As a result of the full-scale war, Armenia has illegally occupied 20 percent of Azerbaijan’s internationally-recognized territories including the Nagorno-Karabakh region and seven surrounding districts. One million ethnic Azerbaijanis were forcibly displaced from these areas and 30,000 were killed.

Despite four UN resolutions demanding the immediate withdrawal of Armenian forces from occupied lands and the return of internally-displaced Azerbaijanis to their native land, Armenia has been refusing to pull its forces out of the occupied territories.