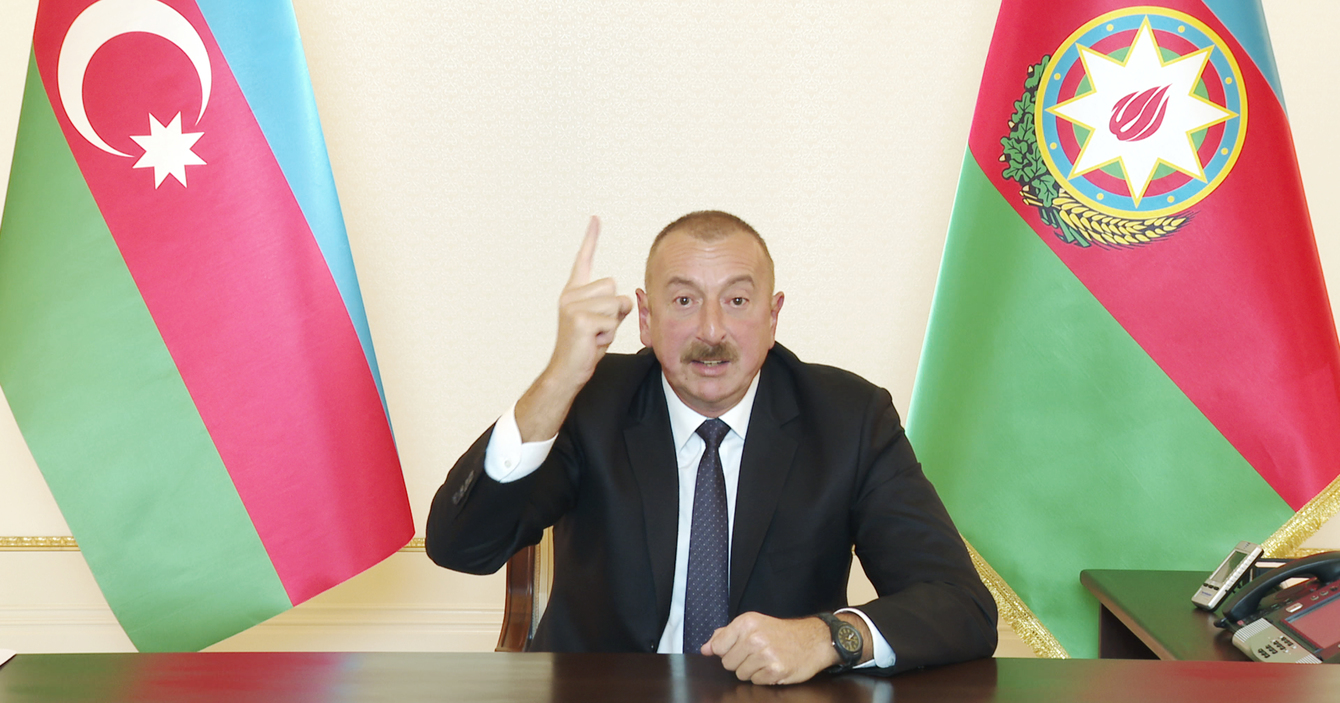 Addressing the nation on Sunday, Azerbaijani President Ilham Aliyev shared his views on recent developments in the Nagorno-Karabakh clashes, criticized international mediators for their inaction and set conditions for resuming the country's ceasefire with Armenia.

In his speech, President Aliyev began by congratulating the people of Azerbaijan on the liberation of the Jabrayil district around the occupied Nagorno-Karabakh region.

“After many years, the city of Jabrayil has been liberated. Jabrayil is ours!” he said, according to President.Az. “We are fighting on our own lands. Our territorial integrity must be restored and we are on the right path. Our soldiers are saviors because they are liberating their native land from invaders.”

President Aliyev went on to add that the negotiations, which have lasted for 30 years, led the Armenia-Azerbaijan Nagorno-Karabakh conflict into a deadlock with little hopes remaining for a political settlement. The resolutions of the UN Security Council have not spurred action for 27 years despite the constructive and fair position of Azerbaijan during all periods of negotiations, he added.

“I have repeatedly told Minsk Group co-chairs, the co-chairs' ambassadors, other international organizations and the European Union to influence Armenia, to impose sanctions and put pressure on it. If there is no strong pressure, Armenia will become even more impudent, even more impertinent and start making new claims,” the president said.

“I wanted this issue to be resolved peacefully. They did not listen to me. Did they think that the Azerbaijani people and I, the President of Azerbaijan, would put up with this situation?!”

After three decades of shuttle diplomacy, the OSCE Minsk Group, a mediation structure co-chaired by the US, France, and Russia, has failed to reach a political solution to the conflict. Azerbaijani authorities have repeatedly blamed the group for its inaction on Armenia’s occupation of Azerbaijani territories.

The conflict in Azerbaijan’s occupied Nagorno-Karabakh region continues to undermine regional peace amidst the unpromising diplomacy of the mediation group. Armenia’s forces shelled heavily the military and civilian positions of Azerbaijan on September 27, triggering the most intense fighting between the two countries since 2016. Azerbaijani army took counter-attack measures to push back against Armenian forces' offensive. However, the non-stop attacks by the Armenian troops provoked major hostilities, which are now in its tenth day.

The international community, including the co-chairs of the Minsk Group, as well as the United Nations, the European Union and regional powers have called for ceasing hostilities and resuming negotiations. French President Emmanuel Macron has openly took Armenia’s side in the ongoing fighting despite his country’s duties of neutrality under the Minsk Group co-chairmanship mandate.

President Aliyev said Azerbaijan agreed to restore the ceasefire in 2018 upon the request of the Armenian Prime Minister, who came to power in May of the same year.

“The ceasefire was restored for two years at the request of the Armenian prime minister. He told me that the situation inside was difficult, that he was being squeezed here and there, asked for some time to solve this problem because he had some new ideas,” President Aliyev said in his address to the nation.

“He said he had drawn a line through everything that happened in the past, asked for a chance, for some time. I said OK. But what happened then? A year later, he said that “Karabakh is Armenia,” the president added, referring to Nikol Pashinyan’s call for a unification between Armenia and Nagorno-Karabakh in 2019.

“My condition is the same – to leave our lands, to leave them, to stop the confrontation. Not in word but in deed,” he said.

The last condition is to give us a schedule for a withdrawal of the Armenian armed forces from the occupied territories. Then, of course, we will restore the ceasefire.”

Over ten days of the ongoing clashes, Armenia's military targeted densely populated residential areas and critical civilian infrastructure in Ganja, Tartar, Beylagan, Dashkasan, Naftalan, Agjabadi, Barda, Goygol, Zardab, Goranboy, Khizi and Yevlakh cities of Azerbaijan. Armenia's troops have also attempted to strike the Absheron peninsula, where the Azerbaijani capital of Baku is located, with a 300-kilometer range missile before the rocket was intercepted by the air defense units of Azerbaijan.

Missile shelling by Armenia's troops have so far killed 27 civilians, including 3 children. Some 141 residents, including at least 30 women and 7 children have been wounded, according to data compiled by the Prosecutor General’s Office of Azerbaijan.