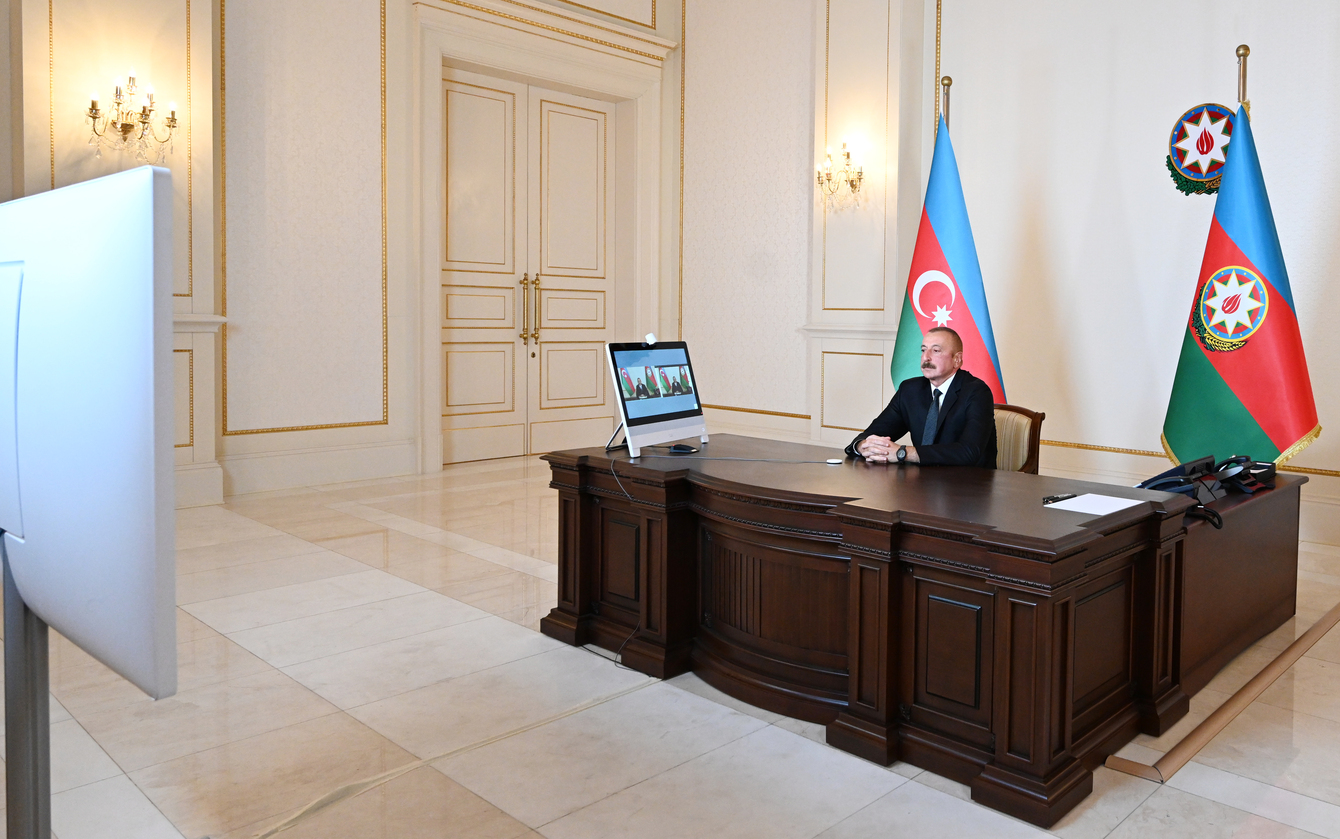 President Ilham Aliyev of Azerbaijan on Tuesday addressed allegations of Turkey providing material support to Azerbaijan as clashes between the Caspian country and Armenia rage on.

In an exclusive interview with Russia-1 TV channel, President Aliyev denied the allegations unequivocally with valid arguments. Armenia's authorities and local media reported earlier that Turkey was directly intervening in Azerbaijan's military operations along the Line of Contact. Armenian Prime Minister Nikol Pashinyan claimed that military instructors and high-ranking military personnel from Turkey are deployed in the command posts of Azerbaijan and said that they were also leading military operations.

President Aliyev explained that Turkey is playing a stabilizing role in the region and supports Azerbaijan's rights under international law, which is grossly violated by Armenia with the occupation of Azerbaijani lands.

"Turkey does not participate in this conflict in any other capacity. All the rumors that Turkey is involved as a party to the conflict, circulated by the Armenian side, are provocative," President Aliyev said while answering questions from the media. "As they say now, this is fake news. There is no evidence of Turkey's involvement in the conflict and nor is that necessary. Azerbaijan’s Army is well-prepared to protect its people and territory."

Prime Minister Pashinyan claimed that Turkey is looking for a reason for a wider involvement in the Nagorno-Karabakh conflict in order to bring its troops to Nakhchivan, a southwestern exclave of Azerbaijan bordering Turkey, Armenia and Iran. He also claimed that Turkey had already deployed its forces there and suggested that the ongoing war with Armenia was a plan that Azerbaijan made jointly with Turkey.

The Defense Ministry of Armenia reported on Tuesday downing of an Armenian warplane and the killing of a pilot by a Turkish F-16 fighter jet, which reportedly took off from the western Ganja city of Azerbaijan. Authorities in Turkey and Azerbaijan immediately denied the news. Fahrettin Altun, top press aide to Turkish President Recep Tayyip Erdogan, called the claim "absolutely untrue."

President Aliyev said that the F-16 aircraft of the Turkish Air Force do not participate in operations in any way.

"Given modern technologies' availability, it is very difficult to conceal anything today because there are objective forms of observation. There is satellite observation, and therefore it is effortless to verify that this is another provocation," he said referring to Armenia's allegations of Turkish intervention in the ongoing fighting.

"We understand the Armenian side's goal – by creating such false news, they first want to belittle the combat capability of Azerbaijan's Army, which is now fulfilling the task of restoring its territorial integrity with dignity. And also to create the impression that the conflict is growing, that third countries are getting involved. They are trying to attract as many countries as possible to justify their provocation."

Turkish Air Force dispatched its F-16 warplanes to Azerbaijan for participating in joint military drills in July. The jets have been deployed in Azerbaijan, as part of the aviation training from July 29-August 10. After the drills, F-16 fleet of the Turkish Air Force has reportedly left Azerbaijan.

Editor-in-chief of Russia's National Defense magazine, Igor Korotchenko said President Ilham Aliyev was right when he said that with the current level of development of intelligence technologies – satellite, electronic, surveillance – it is impossible to hide the fact if the Turkish fighters were indeed deployed in the territory of Azerbaijan.

"This would be exposed quite easily by any country that has satellite intelligence. Today the Nagorno-Karabakh region is closely monitored by all the leading nations of the world," he said, according to President.Az.

The current escalation of hostilities along the Line of Contact in the occupied Nagorno-Karabakh region of Azerbaijan broke out on September 27 following Armenia's shelling of Azerbaijani civilian settlements and military positions. Azerbaijani forces launched immediate countermeasures to repel the offensive. The clashes have further escalated with the deployment of heavy artillery on the frontline by both sides. As of September 30, around 2,300 servicemen of Armenia have been killed or wounded, according to the Defense Ministry of Azerbaijan. However, Armenia's official reports confirm 103 deaths. Azerbaijan did not report a number for military casualties, while civilian death toll is 17 along with 51 injured residents.

Armenia and Azerbaijan have been in conflict for around 30 years since the occupation of Azerbaijani lands by Armenia began in the early 1990s. Dissolution of the Soviet Union in 1991 paved the way for Armenia to launch a full-fledged military attack on Azerbaijan. Armenia launched a military campaign against Azerbaijan which lasted until a ceasefire deal was reached in 1994. The full-fledged war ended with the occupation of 20 percent of Azerbaijan’s internationally recognized territories including the Nagorno-Karabakh region and seven surrounding districts by Armenia. Azerbaijan faced a humanitarian crisis during the war, in which 30,000 of its citizens were killed, while one million others were forcibly displaced from their homeland.