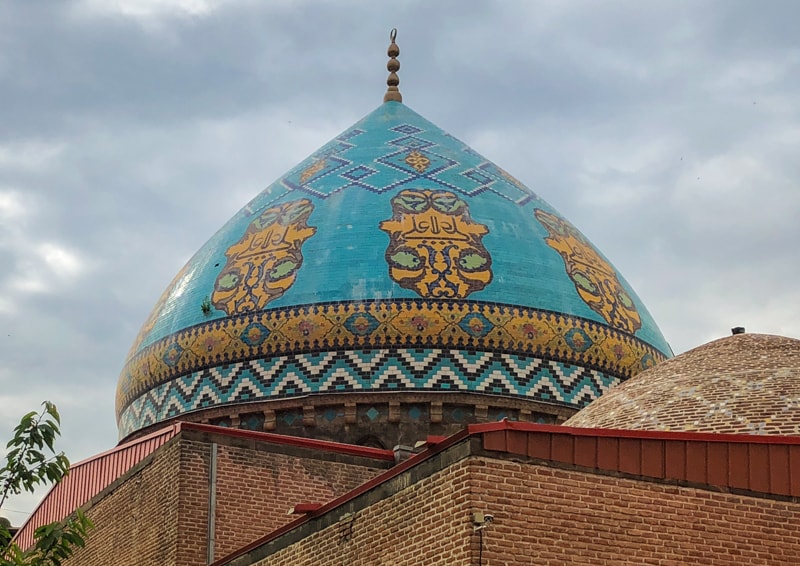 The dome of the Blue Mosque of Azerbaijanis in Armenia's capital Yerevan. Armenians set the building on fire three times in the 20th century, then reconstructed it through Iranian funds and falsified the monument as a "Persian" mosque / Courtesy

Journalists from Baku-based Caliber.Az news service recently travelled to Armenia’s capital Yerevan to reveal the unforeseen cultural genocide against the Azerbaijani heritage in the city from where indigenous Azerbaijanis were forcibly expelled throughout the 20th century.

The state-sponsored cultural vandalism in Yerevan was a part of the large-scale anti-Azerbaijan campaign aimed at erasing all material evidence that testify to the belonging of the city to Azerbaijanis. According to Caliber.Az, at the beginning of the 20th century, there were 310 mosques registered on the territory of the Iravan province (modern-day Yerevan and northern parts of Armenia), however, today only one mosque can be seen in the city - the Goy Masjid (Blue Mosque), which is presented to foreign guests as "Persian".

“The Armenians, with the help of specialists invited from Iran, reconstructed the mosque, put Persian inscriptions on its walls and thus converted the mosque into a “Persian” one,” the journalist says in video footage from Yerevan.

The Blue Mosque in the Azerbaijani city of Iravan (modern-day Yerevan) was built in 1776 upon the order of Huseyngulu Khan Gajar, the khan of the Iravan khanate, which was established by indigenous Azerbaijanis. Armenians set the building on fire three times in the 20th century, including in 1918, 1955, and 1988, all taking place simultaneously with the staged forcible expulsion of indigenous Azerbaijanis. Iranian construction companies assisted the Armenian government in the restoration of the mosque from 1995 to 2006 and designated it as one of the "cultural centers" of Iran in Armenia. Armenia is said to have leased the Blue Mosque to Iran for 99 years.

“When Armenians talk about a 'Persian mosque' in Yerevan, they want to forget by saying 'Persian' that Azerbaijanis have been praying in this mosque since 1760," wrote Thomas de Waal, a senior fellow with Carnegie Europe.

Although the Blue Mosque in Yerevan was refurbished and labeled as “Persian”, the other monuments of indigenous Azerbaijanis in the city could not survive the cultural genocide committed by Armenians. The Tepebashi mosque, which, according to historical sources, was built by the Azerbaijani statesman Abbasgulu khan Iravanski, was demolished in the 1960s and the rubbles of the building currently serve as a shelter for an impoverished Armenian family.

A modern trade centre, called “Rossia” [Russia] currently is seen to show off in the place where once the Demirbulag mosque of Azerbaijanis stood. The mosque, built by indigenous Azerbaijanis in the 17th-18th centuries, was set on fire by Armenians in 1988 and razed to the ground completely in 1990. 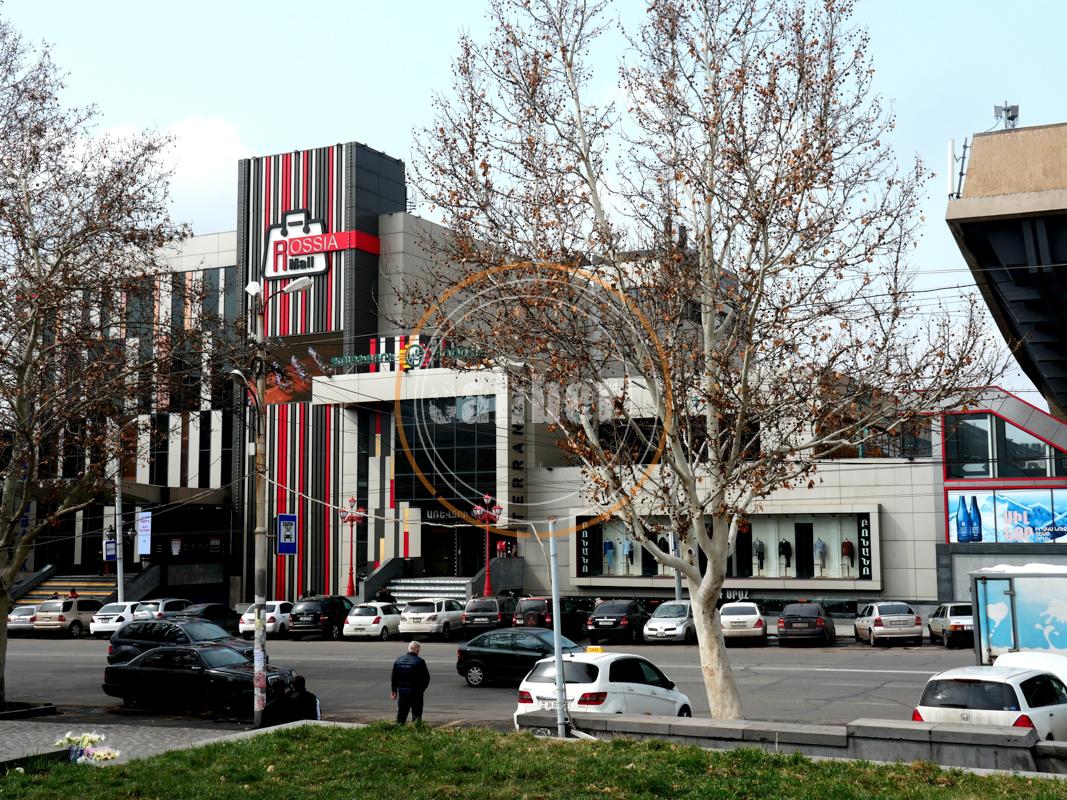 A modern trade center, called "Rossia" [Russia] shows off currently in the place where once the Demirbulag mosque of Azerbaijanis stood in Yerevan / Caliber.Az

One more Azerbaijani monument that Armenians attribute to another nation is the Emir Saad mausoleum on the outskirts of Yerevan. The partial survival of the XV-century building that was built by ethnic Azerbaijani ruler, Pir Huseyn, is protected by the Armenian government as a “medieval Turkmen mausoleum”. The scholars from Turkmenistan have reportedly been invited to Yerevan by the Armenian Catholicos and scientists to “bless” the monument as the joint “architectural monument of Armenian and Turkmen nations”. However, the historical sources prove that the Jafarabad village, where the mausoleum is located, has never been settled by Turkmens or Armenians. 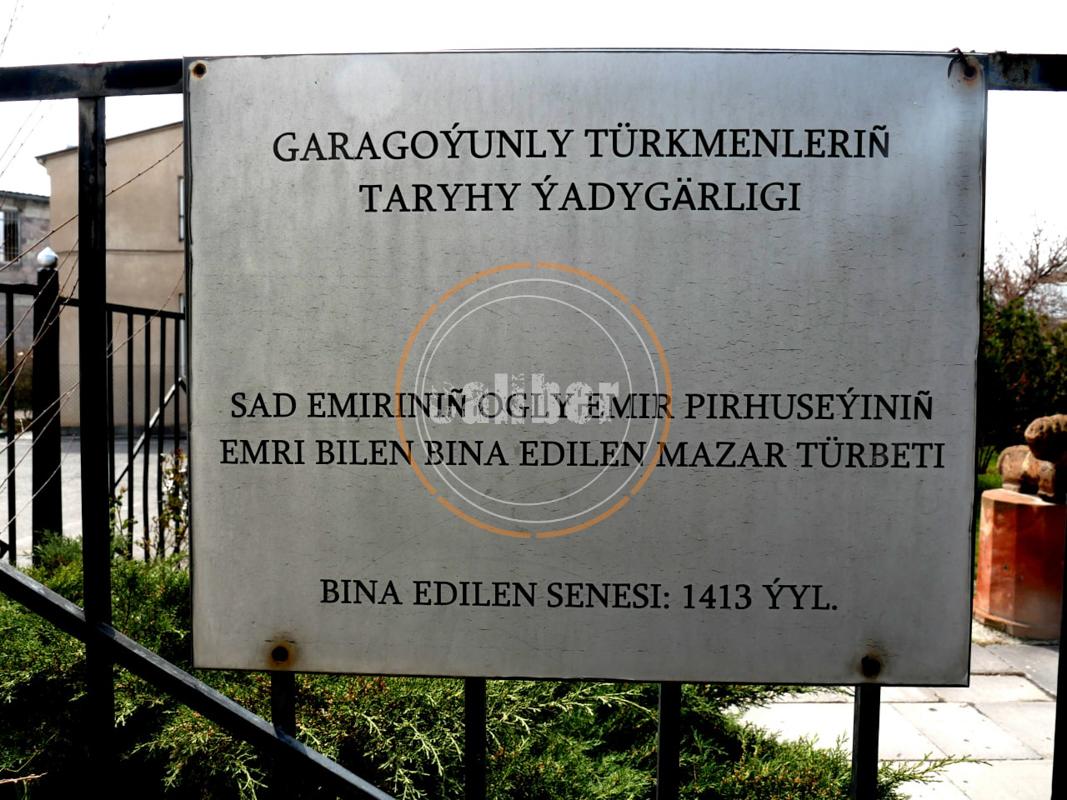 A placard that introduces the Azerbaijani mausoleum of Emir Saad as a so-called "Turkmen monument" / Caliber.Az

The Sardar Mosque, also known as Shah Abbas Mosque among Azerbaijanis, has also gradually vanished in modern-day Yerevan although it survived four hundred years from the 16th to the 20th century. After Iravan was given to Armenians in 1918, the mosque was partially destroyed and ultimately disappeared in the surround of residential skyscrapers. 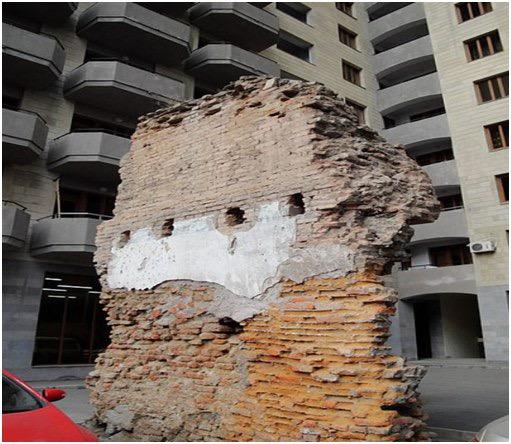 The last seen fragment of the Sardar Mosque of Azerbaijanis from the 16th century that vanished in the surround of modern residential skyscrapers in Yerevan / Caliber.Az

Armenian historian and priest Hovannes Shahkhatunyan wrote that all 49 khans who ruled the Iravan khanate for 390 years from 1441 to 1828 were Azerbaijani Turks. According to Ronald Grigor Suny, a Professor Emeritus of Political Science and History at the University of Chicago, Iravan had been a Muslim city until the Batumi Conference participated by the representatives of the Ottoman Empire and the Transcaucasian Seim in 1918.

Iravan has been originally settled by ethnic Azerbaijanis since its establishment by their ancestors. However, a massive long-term relocation of Armenians by Russian Empire to Iravan and other territories of Azerbaijan started in the wake of the empire’s victory over Iran in two wars in 1804-1812 and 1826-1828 war. A special commission was established to deal with the deployment of Armenians from Ottoman and Iranian territories to the South Caucasus. As a result of the relocation, the number of Armenians in the Karabakh region of Azerbaijan reached 18,000 between 1828 and 1829 and increased to 34,606 by 1843. The next wave of deployment of Armenians into the South Caucasus by Russia lasted from 1904 to 1915, when over 260,000 ethnic Armenians were placed in the territories of Azerbaijan. Despite protests, around 130,000 Armenians were relocated to the Azerbaijani provinces of Iravan and Yelizavetpol (the name of Azerbaijan’s Ganja city during Tsarist Russia's period).

Iravan was ceded to the newly-established Armenian republic on May 29, 1918. Shortly after the Bolshevik forces subjugated the Azerbaijan Democratic Republic on April 28, 1920, a significant part of the Zangazur region was also ceded to the newly-established Armenian Soviet Socialist Republic. The annexation of the territories by Armenia took place under the aegis of the Soviet empire, which forced the Azerbaijani authorities to make territorial concessions to Armenians.

The annexation of Iravan took its toll on its indigenous Azerbaijani population and the cultural heritage of Azerbaijanis. According to 1916 data, there were over 373,000 Azerbaijanis living in Iravan, however, only 12,000 Azerbaijanis were registered in census files in 1922.

The final round of the “Armenianization” of and the deportation of Azerbaijanis from Iravan took place in 1988 when over 300,000 ethnic Azerbaijanis living in the historical Western Azerbaijan region, or modern-day Armenia were expelled forcibly from their ancestral lands. The anti-Azerbaijan sentiments in Armenia were then on the rise accompanied by pogroms and persecution of ethnic Azerbaijanis. The motives for the ethnic conflict were Armenia’s illegal claims for the territories of Azerbaijan, namely the Karabakh region. The deportation of Azerbaijanis later set grounds for Armenia to launch a full-scale military attack on Azerbaijan, leading to the first Karabakh war in 1991-1994 and the occupation of the internationally recognized Azerbaijani lands.