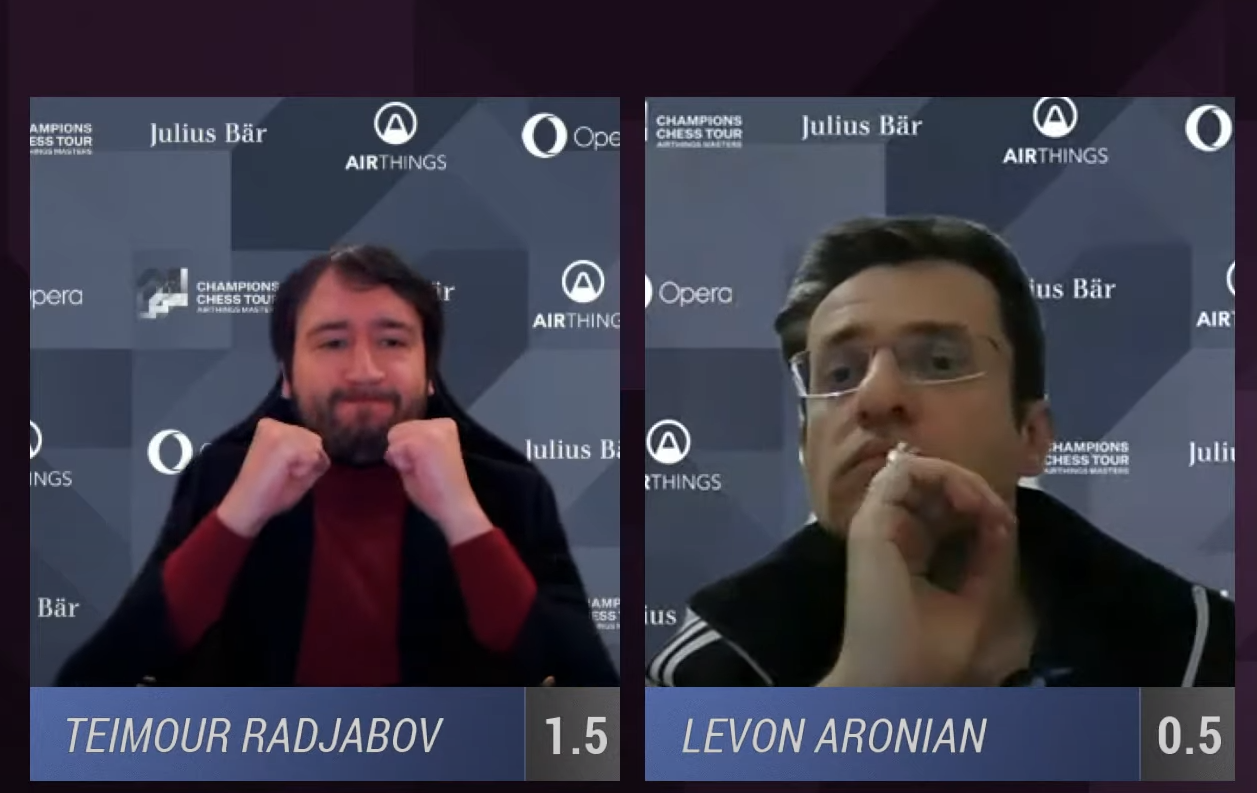 Azerbaijani chess grandmaster Teimour Radjabov claimed the Airthings Masters title after beating his rival from Armenia, Levon Aronian in a two-day final of the tournament on Sunday.

Radjabov took the lead in the final's first match on January 2 with a win in one game and a draw in three games versus Aronian. On a decisive Day 2 of the final, the Azerbaijani mega brain gave no chance to his Armenian rival ending the 4-game rapid match in a 2-1 victory to win the Airthings Masters title and $60,000 prize.

"2020 was a super hard year for me... It took me a lot of energy to work on my chess. To make a comeback to professional chess, because I was kind of depressed... It means a lot to me to win this," Radjabov said shortly after winning Airthings Masters.

"I don’t know what was happening in the last game, but certainly it was about the nerves. I was really afraid to lose this rook endgame, but then I found this nice way of trapping his king on f4, which just made me happy because otherwise, you have to calculate all the time."

Teimour finished the Airthings Masters standings on top with 91 points, going 28 points clear of the runner-up Wesley So, a Filipino grandmaster. The international chess federation FIDE announced the Azerbaijani super grandmaster "The Person of the Day" on its official website. Azerbaijan's President Ilham Aliyev and First Vice-President Mehriban Aliyeva congratulated him on the "convincing victory."

With the win in Airthings Masters, the 2019 World Cup winner Radjabov was the first chess master in the tournament to make it through to the Tour Finals of the Meltwater Champions Chess Tour, which will be held in San Francisco this September.

Airthings Masters was the second loss for Aronian against Teimour Radjabov after a defeat in Skilling Open in November. Radjabov beat his counterpart during the seventh round of the tournament, which marked the opening competition of the 2020-2021 Champions Chess Tour.

Radjabov is one of the most renowned chess grandmasters in modern-day Azerbaijan. He has secured the best ever success in Azerbaijan's chess history by winning the FIDE World Cup in October 2019, when he outshone Ding Liren in the two 5-minute blitz games on the final tiebreak to win the biggest trophy in his professional career.

The 33-year-old chess champion is said to have inherited his talent from his father, a Soviet regional champion Boris Sheynin. After ten years of delving into the secrets of chess-playing, Radjabov became a grandmaster when he was 14.

At the age of 15, he rose significantly through the ranks after defeating the world champion Garry Kasparov in the Linares tournament in 2003. Radjabov described the game against Kasparov as the "most memorable" of his life. The Azerbaijani grandmaster also managed to defeat Ruslan Ponomariov, Veselin Topalov and Viswanathan Anand - three wins that placed him in the elite ranks of global chess. He currently ranks in the Top-10 at FIDE's top 100 players standing for January.