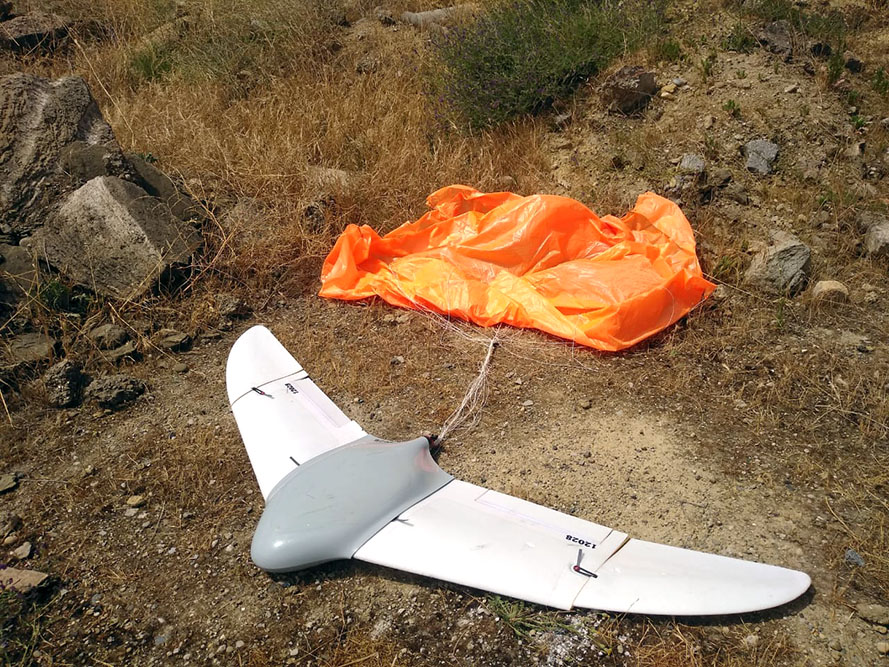 Griffon-12 is a complex designed by Russian design studio PLAZ with its headquarters in the city of Saint Petersburg. The unmanned aerial vehicle is used commonly for real-time local area video surveillance at a distance of up to 90 kilometers / Ministry of Defense of Azerbaijan

The military forces of Azerbaijan have intercepted an Armenian reconnaissance drone over the Armenia-Azerbaijan state border in Azerbaijan's district of Kalbajar on Monday.

Griffon-12 is a complex designed by Russian design studio PLAZ with its headquarters in the city of Saint Petersburg. The unmanned aerial vehicle is used commonly for real-time local area video surveillance at a distance of up to 90 kilometers. The device measures 8.5 kilograms in weight, ascends up to 4 kilometers with nearly 210 kilometers transmission distance and 180 minutes of flight time.

Infiltration attempts of the Armenian military into the Azerbaijani territory were common after the two sides fought a bloody war in Azerbaijan’s Karabakh (Garabagh) region last year. On September 27, 2020, the decades-old conflict between the two countries spiraled after Armenia’s forces deployed in the occupied Azerbaijani lands shelled military positions and civilian settlements of Azerbaijan. During the counter-attack operations that lasted 44 days, Azerbaijani forces liberated over 300 settlements, including the cities of Jabrayil, Fuzuli, Zangilan, Gubadli, and Shusha, from nearly 30-year-long illegal Armenian occupation.

The document addressed the restoration of the war-hit transport and communication infrastructure in the region for the benefit of almost all regional players, including Russia, Iran and Turkey, in addition to Armenia and Azerbaijan. Although the Azerbaijani side has rolled out large-scale restoration and reconstruction projects in its liberated lands, the Armenian side has been resorting to provocations in Azerbaijan's Karabakh region and along the Armenia-Azerbaijan border.

On May 27, two armed sabotage groups consisting of 24 Armenian servicemen infiltrated Azerbaijani territory. They were trying to plant mines in the routes used for supplying the Azerbaijani frontline positions. Azerbaijani forces besieged and caught six of them, while the others immediately retreated.

Shortly before the start of the Karabakh war in September 2020, Armenian troops tried to conduct aerial reconnaissance over Azerbaijani positions. From July to August 2020, Azerbaijani air defense units destroyed seven Armenian spy drones, two of which were identified to be tactical unmanned X-55 aerial crafts — a flying robot produced domestically in Armenia. More than 25 attack and reconnaissance drones of the Armenian military have been downed during the six-week-long clashes in the Karabakh region last year.