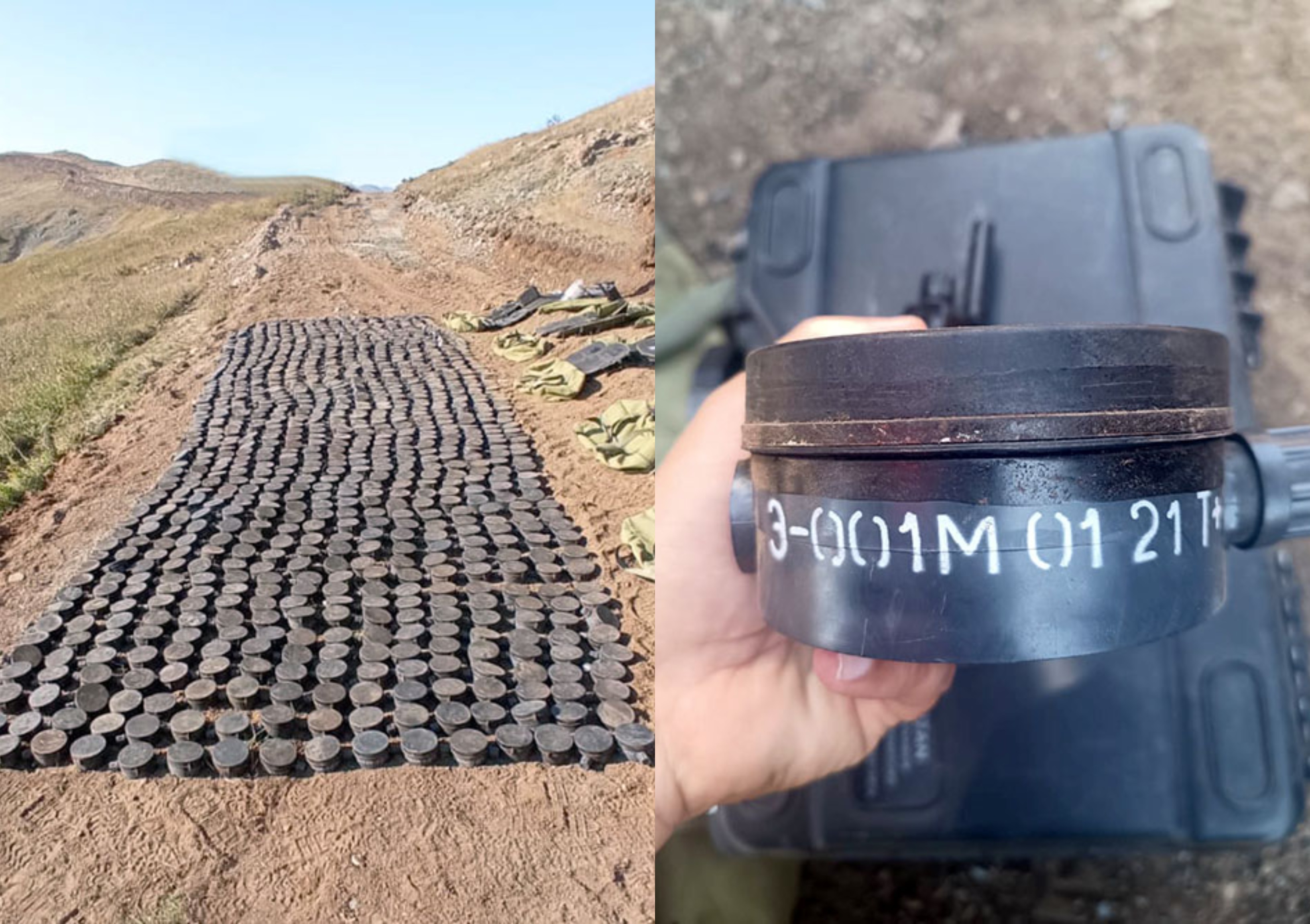 A total of 991 pieces of PMN-E type anti-personnel mines were removed from the mined area, transported, and disposed of, according to the Defense Ministry of Azerbaijan. The landmines are said to be produced in Armenia in 2021, after the 2020 war with Azerbaijan in the latter's Karabakh region / Ministry of Defense of Azerbaijan

The Armed Forces of Azerbaijan discovered a minefield in the northwestern direction of the recently liberated Saribaba high ground, the eastern part of the country's Lachin region.

According to the country’s Defense Ministry, the anti-personnel minefield was detected as a result of the terrain reconnaissance conducted by engineering units of the Azerbaijan Army on Monday.

“On August 15, within one day, a total of 991 [pieces of] PMN-E type anti-personnel mines were removed from the mined area, transported, and disposed of in compliance with safety regulations,” the ministry said in a statement.

Meanwhile, according to the ministry, the detected mines were manufactured by Armenia in 2021, well after the Second Karabakh War ended in 2020. This development testifies to the fact that the area in Saribaba was mined following the signing of a tripartite statement by Azerbaijan, Armenia and Russia, which brought the war to an end. Moreover, the mined area was within the perimeter of the temporary monitoring zone of the Russian peacekeepers in Azerbaijan.

Mine threats were common in the once occupied Azerbaijani territories as the Karabakh (Garabagh) and East Zangazur regions of Azerbaijan had been heavily mined by Armenia since the early 1990s. Armenia launched a full-blown military assault against Azerbaijan, which lasted until a ceasefire reached in 1994 and saw Armenia occupying 20 percent of Azerbaijan’s internationally-recognized territories.

On September 27, 2020, the conflict took a violent turn after Armenia’s forces deployed in occupied Azerbaijani lands shelled military positions and civilian settlements of Azerbaijan. During the counter-attack operations, Azerbaijani forces liberated over 300 settlements, including the cities of Jabrayil, Fuzuli, Zangilan, Gubadli, and Shusha. The war ended with the signing of a tripartite agreement on November 10, 2020, by Armenia, Azerbaijan and Russia, under which Armenia also returned the occupied Aghdam, Kalbajar, and Lachin districts to Azerbaijan.

Since the end of the war, the Azerbaijani government has been conducting intensive demining operations in the liberated territories - an indication that mine threats still remain in the territories. Officials in Baku are convinced that the maps hidden by Armenia could help neutralize at least one million landmines planted in the once occupied Azerbaijani lands and it is estimated the demining process could take 10 to 13 years to complete.

In addition to previously buried mines, some of the minefields in the liberated Azerbaijani lands are believed to be laid by illegal Armenian armed detachments that are still deployed there. Some media reports claimed that the mines recently found in Saribaba were planted despite the presence of the Russian peacekeepers in the territory and the tripartite agreement that calls for the removal of Armenian armed formations.

The government of Azerbaijan has been calling on Armenia's authorities and the Russian peacekeeping command to completely withdraw the Armenian armed formations stationed in the Azerbaijani lands. However, the demands of Baku remain unanswered.

The regular provocations of the same illegal Armenian armed detachments triggered on August 3 an anti-terror operation, codenamed “Operation Vengeance” by the Azerbaijani army. The operation came in response to the deadly acts carried out by illegal detachments which killed the Azerbaijani army’s conscript Anar Kazimov on the morning of August 3. The Armenian armed gangs also attempted to seize the Girkhgiz high ground, located on a mountain range covering the territory of the Kalbajar and Lachin regions, and establish new combat positions there.

As part of the operation, the Azerbaijani troops destroyed several combat positions of Armenian armed detachments and launched an airstrike on a military unit of the illegal gangs, leading to the liquidation of several D-30 howitzers, military vehicles and a large amount of ammunition.

“If a similar provocation is perpetrated again, the response will be the same. No one can stop us, and no one can stand in our way. We can conduct any operation on our lands at any time,” he said in an interview with state channel AzTV on August 12.

“Armenia must come to terms with this situation, with the new reality in the future, because there is no other option. Operation Vengeance showed Armenia again that no one and nothing can stop us – not someone's statement, not someone's announcement, not some phone call. Nothing and nobody! The people of Azerbaijan know this perfectly well. The Second Karabakh War showed this. I am sure that the other party [Armenia] also knows this. They simply forget this sometimes. This is why these tragic events happen," he added.

Meanwhile, the illegally settled ethnic Armenians are expected to leave the Azerbaijani city of Lachin, where Russian peacekeepers are stationed, by August 25 under conditions of the tripartite agreement signed on November 10, 2020. The city and a highway traversing it will return under the control of Azerbaijan after the Azerbaijani government put into operation an all-new road to replace the Lachin corridor and enable an alternative route between the ethnic Armenian residents of Azerbaijan's Karabakh region and Armenia. Before leaving Lachin, the illegal settlers were seen setting houses and forests on fire in Lachin in unforeseen vandalism and ecological terror.