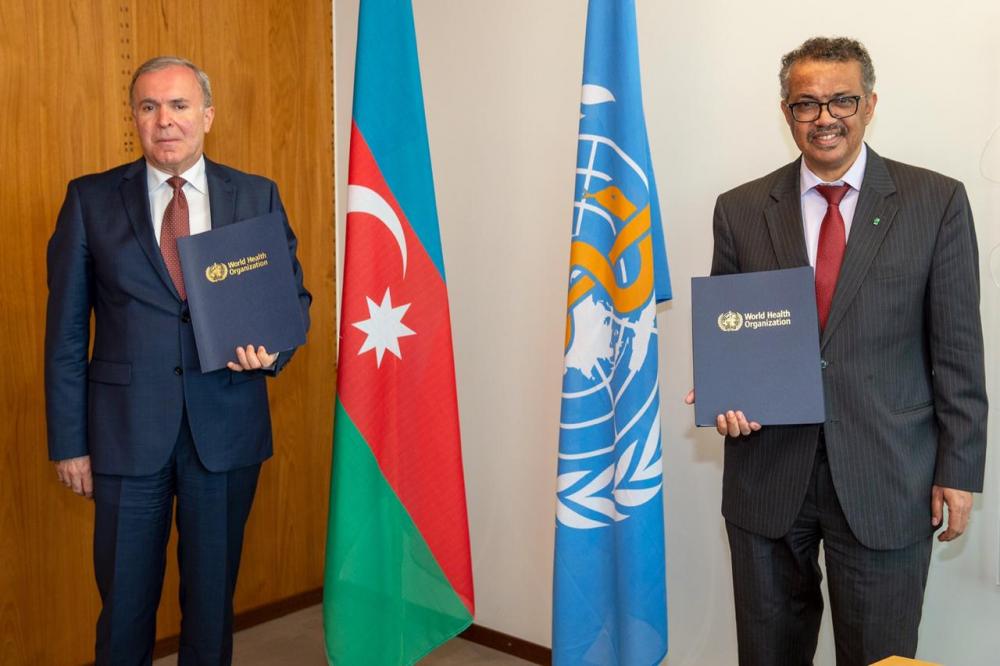 Permanent Representative of Azerbaijan to the UN office in Geneva and other international organizations, Ambassador Vaqif Sadiqov (L), and WHO Director-General Tedros Adhanom Ghebreyesus signed the document on May 11 in Geneva, Switzerland / Courtesy

The new tangible result of the recent virtual meeting of the Non-Aligned Movement (NAM) Contact Group addressing the COVID-19 situation came this week as officials from the World Health Organization and Azerbaijan inked an agreement under which the Caspian nation will donate funds to help pandemic-hit countries.

Permanent Representative of Azerbaijan to the UN office in Geneva and other international organizations, Ambassador Vaqif Sadiqov, and WHO Director-General Tedros Adhanom Ghebreyesus signed the document on May 11. As part of the deal, $5 million in voluntary financial aid will be allocated by Azerbaijan toward the COVID-19 Solidarity Response Fund within the Strategic Preparedness and Response Plan of WHO. The donation will be distributed to most vulnerable NAM member countries in Africa, Asia, and Latin America in coordination with Baku.

“The agreement comes into force today and it is considered to be valid until the end of the next year,” Ambassador Sadigov told Azerbaijan Television.

The new donor agreement comes after Azerbaijan’s President Ilham Aliyev’s announcement of additional funds allocated to the WHO in support of the neediest NAM countries. It also follows an earlier deal signed in Geneva on March 13 confirming the first $5 million voluntary financial aid from Azerbaijan to the WHO fund.

Azerbaijan is among 44 donors that have supported the WHO's anti-COVID-19 efforts, which also include the United Kingdom, World Bank, France, European Commission, Singapore, Japan, Saudi Arabia and others. From the Caspian Sea region, Azerbaijan is the only country to support such activities with voluntary financial aid. As of May 8, the WHO received over $530 million in donations. The United Kingdom is the largest contributor with slightly more than $107 million.

The number of confirmed coronavirus cases has surpassed 4.23 million worldwide, according to the latest figures published on the US-based Johns Hopkins University's interactive COVID-19 dashboard. Global fatalities have exceeded 291,000, while more than 1.5 million recoveries have been reported.

Azerbaijan has recorded 2,693 COVID-19 cases and 33 deaths resulting from the virus as of May 12, while 1,735 recoveries have been accounted for.

The WHO has bought and shipped 13 million personal protection equipment (PPE) sets to 133 countries, which include 2.5 million masks, 1.6 million gloves and 79,000 face shields. As part of the measures aimed at strengthening laboratory capacity, 126 countries have received 1.5 million diagnostic kits from the organization. More than 100 countries are working under WHO guidance to find effective vaccines and treatments to contain the coronavirus outbreak.

In addition to supporting the WHO's pandemic-focused efforts, Azerbaijan has also assisted countries within its region. Iran received a $5 million donation from Baku on March 6 to enhance the country's anti-COVID-19 response. The number of confirmed coronavirus cases and fatalities in Iran last stood at 110,767 and 6,733, respectively.