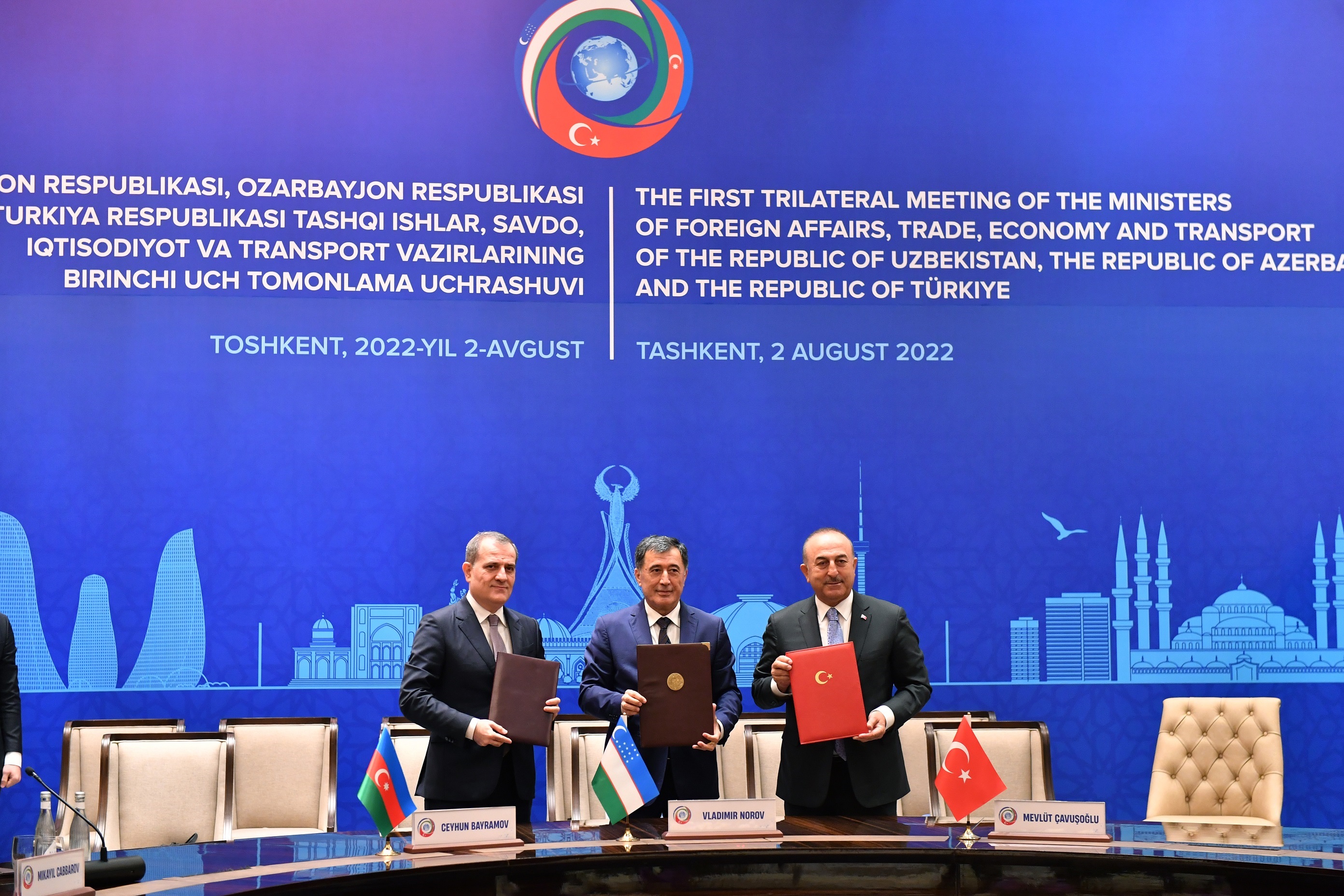 The Foreign, Economy, and Transport Ministers of Azerbaijan, Türkiye, and Uzbekistan gathered in the latter’s capital Tashkent on Tuesday to establish an all-new format of dialogue and cooperation among the three Turkic-speaking countries.

The ultimate outcome of the meeting was the signing of the Tashkent Declaration, which, according to the ministers, will reshape the cooperation of the participating countries in multiple spheres from economy to trade, transportation, and energy, as well as address the regional and global security challenges.

Uzbekistan’s acting Foreign Minister Vladimir Norov said the creation of a dialogue format "Uzbekistan - Azerbaijan - Türkiye" is more in demand than ever, given the rapid and ambiguous processes taking place in international relations and the global economy.

“Our countries share common positions on many international issues, since we are all united in one goal - in the sustainable and dynamic development of the Turkic world. We look forward to joint close cooperation in the preparation and successful holding of the first summit of the Organization of Turkic States in November this year in Uzbekistan. We pay special attention to strengthening our trade, economic, and transport cooperation,” Norov said.

“The new trilateral format of cooperation between Azerbaijan, Türkiye, and Uzbekistan will contribute to the development and promotion of joint projects in various fields and will strengthen interaction on regional issues of mutual interest,” Bayramov said, adding the tripartite discussions were also held on the development of the international transport corridor.

For his part, Mevlut Chavushoglu, the Foreign Minister of Türkiye, said the all-new dialogue format will be a sustainable mechanism that will allow implementing specific projects through close coordination and interaction.

In the context of cooperation on the international transport corridor, the ministers highlighted the potential of the Trans-Caspian International Trade Route (TITR), known also as the Middle Corridor”, as the main pivot for realizing the high transit potential of the three countries. Azerbaijan’s Baku-Tbilisi-Kars railway and multi-modal Zangazur corridor project also took special attention as integral parts of TITR.

Uzbekistan’s FM Norov said Tashkent is interested in the realization of the Zangazur corridor project, which enables the shortest overland connection between Europe and Asia.

The multimodal Zangazur corridor is expected to give momentum to the growing mutual trade volumes between the countries in Europe and Asia. The passage will restore the shortest connection between Azerbaijan’s mainland with its southwestern exclave of Nakhchivan with a further spur into the Turkish market.

Construction of the Zangazur Corridor is one of the economic benefits brought into the region after Azerbaijan’s victory in the Second Karabakh War in 2020 and the liberation of its territories from decades-long illegal Armenian occupation.

Azerbaijan has been actively restoring the vital Horadiz-Aghband railroad that stretches to the Armenia-Azerbaijan state border in the country’s Zangilan district as an integral part of the Zangazur corridor. The project is being implemented in three stages totaling 110.4 kilometers in length. The railway is expected to go online sometime in 2023.

According to some analysts, the corridor will form an essential link in the East-West, including TITR, and North-South transport corridors to benefit all regional countries and contribute to the Eurasian trade and transport communications that incorporate the regional economies with a nominal GDP of $1.1 trillion.

TITR runs from the Chinese Lianyungang seaport to the Chinese-Kazakh border, further through Kazakhstan, the Caspian Sea, Azerbaijan, and Georgia to Ukraine and Poland. Goods are transported by railway to the Kazakh seaports of Aktau and Kuryk, and further sent to the Baku International Sea Trade Port (Port of Baku) in Azerbaijan by ships via the Caspian Sea. In Azerbaijan, containers are transported along the 826-kilometer Baku-Tbilisi-Kars railway toward Georgia and ultimately Türkiye. The route further splits up into two with both leading to Europe — one of them passes through the Turkish cities of Mersin and Istanbul and the Mediterranean Sea, while the other one stretches to the Ukrainian city of Chernomorsk via the Black Sea.

In 2021, the transit and container traffic on TITR surpassed 25,000 twenty-foot equivalent containers (TEU), increasing 20 percent from 2020. The participating countries intend to increase the volume of cargo along the route by six times to 3.2 million tonnes per annum.

Uzbekistan has long been seeking integration into TITR for transporting cargo through Azerbaijani and Kazakh maritime and overland transport grids to the Black Sea and European countries. The total length of Uzbek railways measures 4,400 kilometers in length. Railroads transport approximately 75 percent of the country’s international cargo deliveries and account for 66 percent of overall freight turnover.

Meanwhile, Uzbek Transport Minister Ilhom Mahkamov suggested establishing an all-new multi-modal transport route, dubbed “Türkiye – Caucasus – Central Asia – South Asia via Afghanistan”, in the ministerial meeting in Tashkent on Tuesday. According to him, the new route could open ample opportunities for developing cargo transportation with the countries of South Asia. For this purpose, Mahkamov proposed to use the potential of transporting goods through the territory of Uzbekistan and Afghanistan to Pakistan.

According to statistics data, a total of 330,000 tons of cargo were transported on the “Uzbekistan-Afghanistan-Pakistan” route during the first six months of 2022, showing an increase by 2.6 times from the last year’s same period.