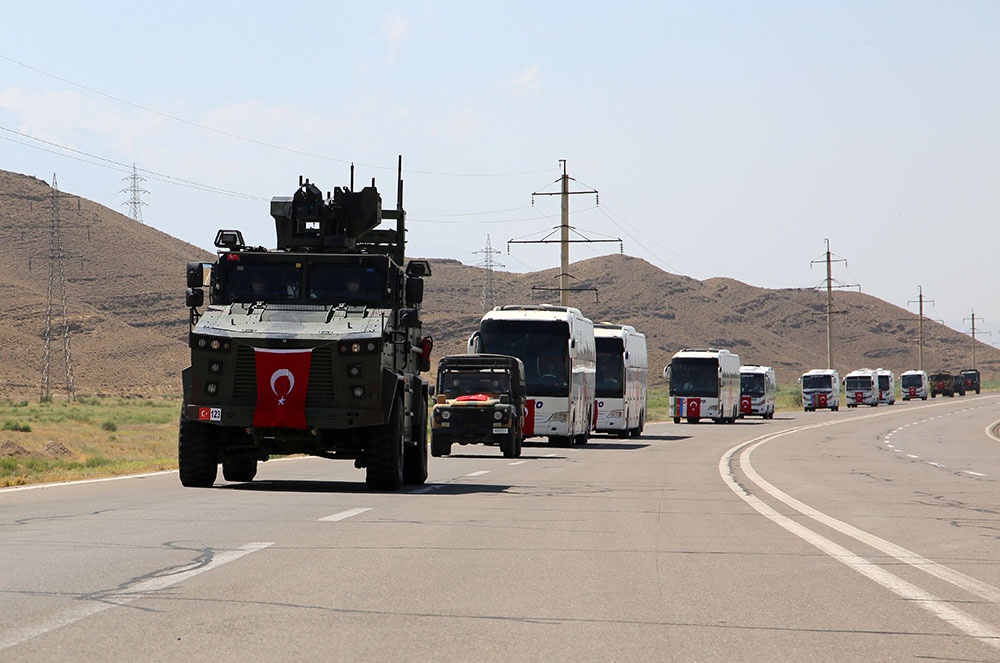 Azerbaijani and Turkish armed forces are gearing up for military drills that will take place over two weeks in Azerbaijan. The Land Forces and the Air Force of the two neighboring countries will be involved in the Live Fire Joint Large-Scale Tactical and Flight-Tactical Exercises.

The Defense Ministry of Azerbaijan reported on Monday that the exercises are organized as part of the annual plan outlined in the Agreement on the Military Cooperation between the two countries. The military personnel, armored vehicles, artillery mounts, and mortars, as well as military aviation and air defense equipment of the two armed forces, will participate at the military rehearsal, according to the ministry.

The exercises with the participation of the Air Force will reportedly be held July 29 - August 10 in Azerbaijan's capital Baku, the southwestern Nakhchivan Autonomous Republic, the country's second-largest city of Ganja, and the central districts of Kurdamir and Yevlakh. The exercises involving the Land Forces will take place August 1 - 5 in Baku and Nakhchivan.

After arriving in Nakhchivan on Monday, part of the military personnel and equipment from Turkey was relocated in the exercise area.

The Azerbaijani-Turkish military drills follow the recent fatal border clashes between the militaries of Armenia and Azerbaijan. Provocative attempts by Armenian troops against the Azerbaijani positions stationed in the Tovuz region on July 12 led to short, but deadly skirmishes that lasted until July 15. Azerbaijan lost 12 servicemen in the fighting, including a general, and one civilian. Although Armenian authorities claimed that four servicemen had died in clashes, the civil society of the country criticized the government for hiding the real number, which is believed to be over 30.

Ankara has immediately voiced its full support to Baku during and after the border clashes. Turkish foreign ministry issued a statement saying Turkey will "with all its capacity" stand by Azerbaijan as the Caspian country seeks to protect its territorial integrity. A week after the attack, Turkish Defense Minister Hulusi Akar received Azerbaijani Deputy Defense Minister Ramiz Tahirov and Karam Mustafayev, Deputy Defense Minister and the Commander of the Combined Arms Army in the Nakhchivan Autonomous Republic, a southwestern Azerbaijani exclave surrounded by Armenia, Turkey and Iran to discuss the tensions on the Armenia-Azerbaijan border. Akar reiterated Ankara's position on the matter, adding "no one should doubt that."

Head of the Baku-based Atlas Research Center, Elkhan Shahinoglu says the upcoming Azerbaijan-Turkey military drills send a message to the powers behind the occupation of Azerbaijani lands, referring to Armenia.

"In just 10 days, military exercises of the two countries' armies will be held in Baku, Nakhchivan, Ganja, Kurdamir, and Yevlakh, meaning entire Azerbaijan will be covered. This is very important and is a significant message to the occupier and the forces behind it," Shahinoglu told Caspian News. "With the Kars agreement, Turkey is the guarantor of only Nakhchivan's security. However, the geography of joint military exercises shows that now the security of the whole of Azerbaijan is important for Turkey."

Shahinoglu recalled the recent exercises of Russian and Armenian troops for neutralizing unmanned aerial vehicles, adding that amidst such developments, raising the military cooperation with Turkey to the highest level is of vital importance for Baku.

Currently, 20 percent of Azerbaijan's internationally recognized territory is under Armenia's occupation. After the dissolution of the Soviet Union, the two countries that formed part of the union fought a bloody war between 1991 and 1994. Armenia fanned the flames of war with encroaching on Azerbaijan's Nagorno-Karabakh region. Consequences of the four-year war were quite catastrophic for Azerbaijan: the Nagorno-Karabakh region and seven surrounding districts were occupied, 30,000 ethnic Azerbaijanis were killed, and one million were forcibly displaced from their homes by Armenia's military.

Armenia has been refusing to fulfill four UN resolutions that demand unconditional withdrawal of the forces from the occupied lands and return of displaced people to their houses. Instead, the country provokes regular hostilities both along the Line of Contact in the occupied territories and on the border.

To strengthen the army's combat readiness, Azerbaijani armed forces teamed up with their Turkish counterparts for 13 armed rehearsals in 2019. On June 8-11 of the same year, 5,000 soldiers, 200 tanks and armored vehicles, 180 missiles and cannons, 21 aircraft and helicopters, and other military equipment were involved in large-scale drills in Nakhchivan. President Ilham Aliyev of Azerbaijan said Baku and Ankara plan to hold more exercises this year.

The procurement of the equipment is expected to take place as part of the Military Financial Cooperation Agreement that was signed between the two countries in February 2019. The document addresses Turkey's $28 million financial package for defense purchases of Azerbaijan. In addition to UAVs and UCAVs, Azerbaijan is said to be mulling the purchase of Turkish-made Altay tanks and Atak helicopters.