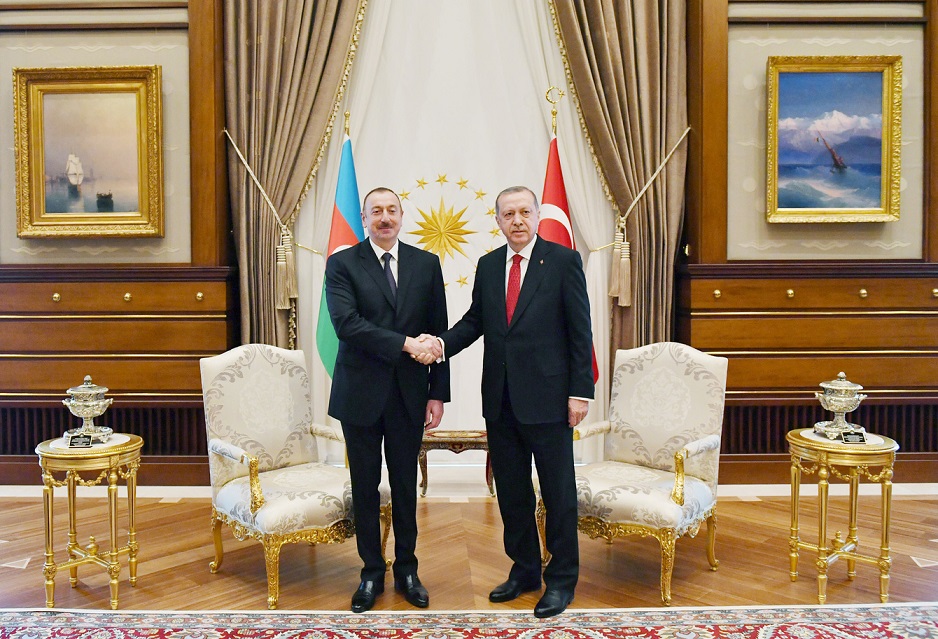 Increasing investment opportunities between two Turkic states, namely Turkey and Azerbaijan, were put under the spotlight on Wednesday during Azerbaijani President Ilham Aliyev’s meeting with his Turkish counterpart Recep Tayyip Erdogan in Ankara.

President Aliyev, who made his first foreign visit to Turkey after being elected to a new term on April 11, said both countries are enthusiastic about investments of great economic and political significance, such as the Trans Anatolian natural gas pipeline (TANAP) and Star Oil Refinery.

“Azerbaijan has so far invested about $14 billion in the Turkish economy, and Turkey has invested over $12 billion in the Azerbaijani economy,” Aliyev said, adding, “We are increasing mutual investment.”

“Opening in the near future [both] TANAP and the Star oil refinery will certainly increase our capabilities. I should also note that at the expense of the Azerbaijani investments the port Petlim is built - the biggest port within the Aegean region of Turkey and the third largest port in Turkey,” Aliyev said. The Azerbaijani president said that the extensive teamwork by the two sides is “reshaping” the energy and transportation map of Eurasia.

For his part, President Erdogan noted that the launch of the TANAP gas pipeline in June will put Azerbaijan - already among the largest external financial players in the Turkish market - on the top of the country’s foreign investors. The total investment by Azerbaijan in Turkey will reach $18 billion by 2020, according to Azerbaijan’s state oil company SOCAR.

SOCAR has been zeroing in on the energy and transportation sector of Turkey through huge investments in various energy branches, including oil and gas, as well as seaports. TANAP is the largest integral part of the Southern Gas Corridor project, which aims to diversify Azerbaijan’s gas export markets and enhance the energy security of Turkey and Southern Europe with an annual delivery of 16 billion cubic meters (bcm) of natural gas from the Caspian Sea reserves of Azerbaijan. SOCAR holds 58 percent share in TANAP project.

TANAP measures 1,850 kilometers - over half of the corridor’s 3,500 kilometer route. The pipeline costs $8.6 billion according to World Bank reports. SOCAR plans to invest somewhere around $6 billion in TANAP by 2020, which will allow Turkey to pump 6 bcm of natural gas from TANAP to its markets, which depend completely on foreign imports due to a shortage in national supply.

The corridor will be fully functional sometime in 2020, with its European segment – the Trans Adriatic Pipeline (TAP) - launch, delivering the remaining 10 bcm of Caspian gas to southern Europe.

Alleviation of Turkey’s reliance on foreign oil-based products, in addition to gas dependency, is being supported by Azerbaijan’s SOCAR through the construction of the STAR Oil Refinery, located near Izmir in western Turkey.

The $5.6 billion refinery will help Turkey reduce its dependency on foreign processed oil products by $2.5 billion, or more than 25 percent of its needs. Various types of crude oil, such as Ural, Azeri Light, and Kirkuk will be processed at the plant, which is able to store around 1.64 million cubic meters of processed product in 63 tanks. The complex will deliver 10 million tons of oil-based products per year to Turkey’s domestic market of 81 million people, including 1.6 million tons of naphtha, five million tons of low sulfur diesel, 1.6 million tons of jet fuel, 300 thousand tons of liquefied petroleum gas (LPG) and one million tons of petrochemicals. SOCAR, the major shareholder in Turkey’s largest chemical complex Petkim, will be the main supplier of raw materials.

The Petlim project, which was put by President Aliyev among the key joint projects of Azerbaijan and Turkey in the transportation sector, is a container terminal port at the Aliaga port of Turkey near the Izmir city in the Aegean Sea coasts. The port is reportedly designed to help Turkey improve its logistics infrastructure. Currently, high-tonnage vessels are lacking a direct route to Turkish coasts as they unload the goods to smaller tankers at certain ports in Cairo and Greece before transporting cargo to Turkey.