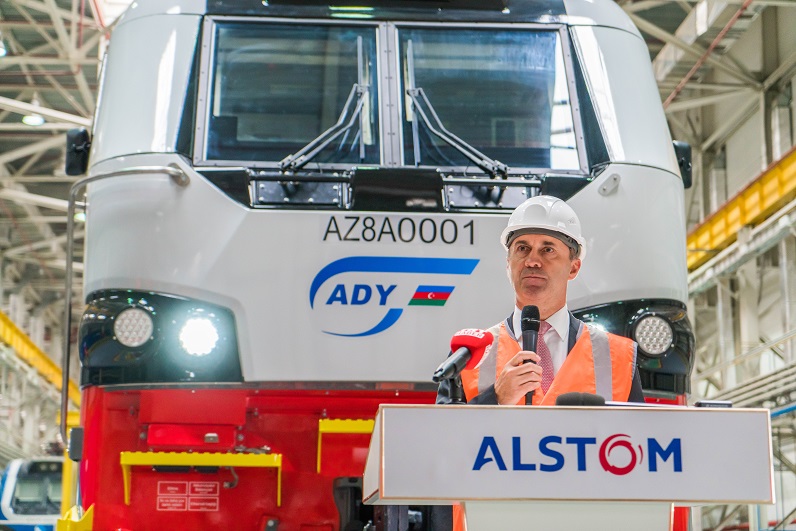 Azerbaijan Railways, the country’s national railway, plans to launch what will be its first heavy freight locomotive, the Prima AZ8A, which was unveiled in Kazakhstan’s capital city Astana on Wednesday. / Alstom

With high expectations of the Caspian region, and Azerbaijan in particular, to become a major transit hub for cargo moving between East Asia and Europe, world class transportation infrastructure is being built out to meet global market demands.

Azerbaijan Railways, the country’s national railway, plans to launch what will be its first heavy freight locomotive, the Prima AZ8A, which was unveiled in Kazakhstan’s capital city Astana on Wednesday. The locomotive was designed and constructed by the leading French transport engineering company, Alstom. Azerbaijan Railways has orders for 40 units.

“We are pleased that this locomotive will be part of the development of the transit link between the Caspian and Black Seas, Russia and Iran – an intersection where Azerbaijan, with its 3,000 kilometers of line, plays a key role,” said Bernard Peille, Alstom’s Managing Director for the Alstom’s Western and Central Asia Cluster at an unveiling in Astana.

The new AZ8A heavy freight locomotive, also known as Prima T8, is one of the most powerful electric locomotives in the world and is capable of running at 120 kilometers per hour (74.5 miles per hour). Technology features allow it to run in an energy-saving mode, making the car energy efficient and environmentally friendly, as it operates via long-distance routes and hauls up to 9,000 tons of cargo.

While its technological specs are impressive driver comfort and versatility may be one the biggest advantages of the new cars. 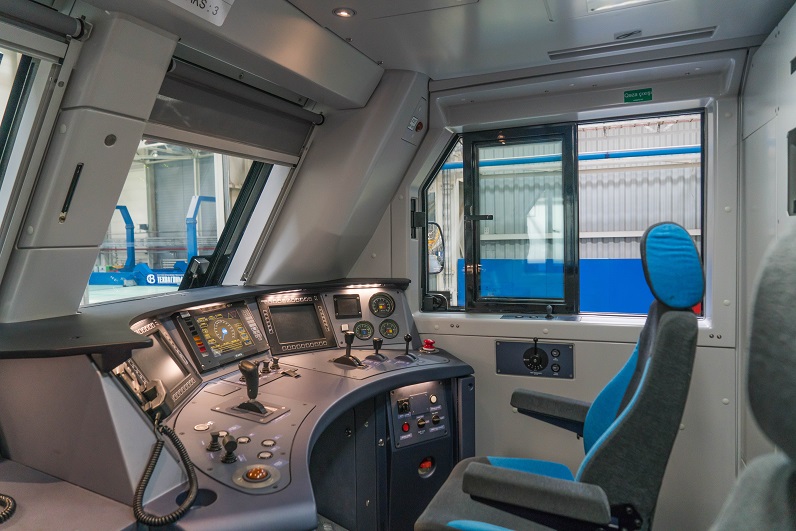 While its technological specs are impressive driver comfort and versatility may be one the biggest advantages of the new cars. / Alstom

Prima AZ8A is equipped with a climate control system and storing facilities, while its cabins comply with modern-day ergonomics and safety regulations that ensures safety and comfort for passengers and operators. The model was designed and assembled to operate in temperatures ranging from -25°C to 50°C, and requires minimum maintenance, providing high-reliability and a low lifecycle cost.

The 40 freight cars ordered by Azerbaijan Railways are being assembled at Alstom’s manufacturing hub in Astana, and the first cargo car will be delivered by the year’s end. After traveling to western Kazakhstan, the car will be loaded onto a ship and transported to Azerbaijan via the Caspian Sea.

“New locomotives will be operated along all directions of Azerbaijan’s railways, mainly along the Baku-Boyuk-Kesik [railway] line, which is an integral part of the Baku-Tbilisi-Kars route,” Sevinj Gadirova, a spokesperson for Azerbaijan Railways, told Caspian News on Wednesday, referring to just one of the billion-dollar transportation and logistics developments currently underway in the Caspian and Central Asia.

The Baku-Tbilisi-Kars (BTK) line, which came online last October 30, traverses Azerbaijan and Georgia and ends in far eastern Turkey, passing through the cities of Baku, Tbilisi and ending in Kars. With the total length of 526 miles, the BTK can move 17 million tons of cargo per year and three million passengers at its height, expected to be reached in five years. The route helps cut transit time for goods and people moving between China and Europe in half, from 25-30 days to just 15 days. Several countries have already expressed interest in using the BTK railway for international cargo transportation, including Afghanistan, China, Iran, Kazakhstan, Pakistan and Russia.

The deal between Alstom and Azerbaijan Railways was inked in 2014 during a visit to Baku by then-French President Francois Hollande. The deal, worth € 288 million, will result in the production and delivery of 10 passenger and 40 freight cars. One passenger locomotive arrived in Azerbaijan last November, and the delivery of the remaining cars will be made by 2021. In addition, a service depot that will provide technical support and maintenance services will be built, where French experts from Alstom will train Azerbaijani Railways personnel on how to operate the locomotives.

“We even trained local specialists for service, which will be launched in Ganja and Baladzhary in the near future,” said Didier Pfleger, Senior Vice President for the Middle East and Africa Region at Alstom.

Azerbaijan’s railway system includes over 2,900 km (1,800 mi) of tracks. About 1,270 km (790 mi) are electrified at 3 kilovolts (kV), using direct current. In 2006, a program to overhaul the entire system was put into place, which included gradually changing the power system from direct to alternating current. 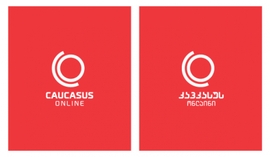 The realization of a digital telecommunications corridor between Europe and Asia has been jeopard... 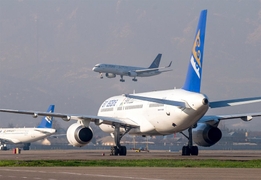 Kazakhstan is planning to gradually resume flights with seven countries starting from mid-August,...