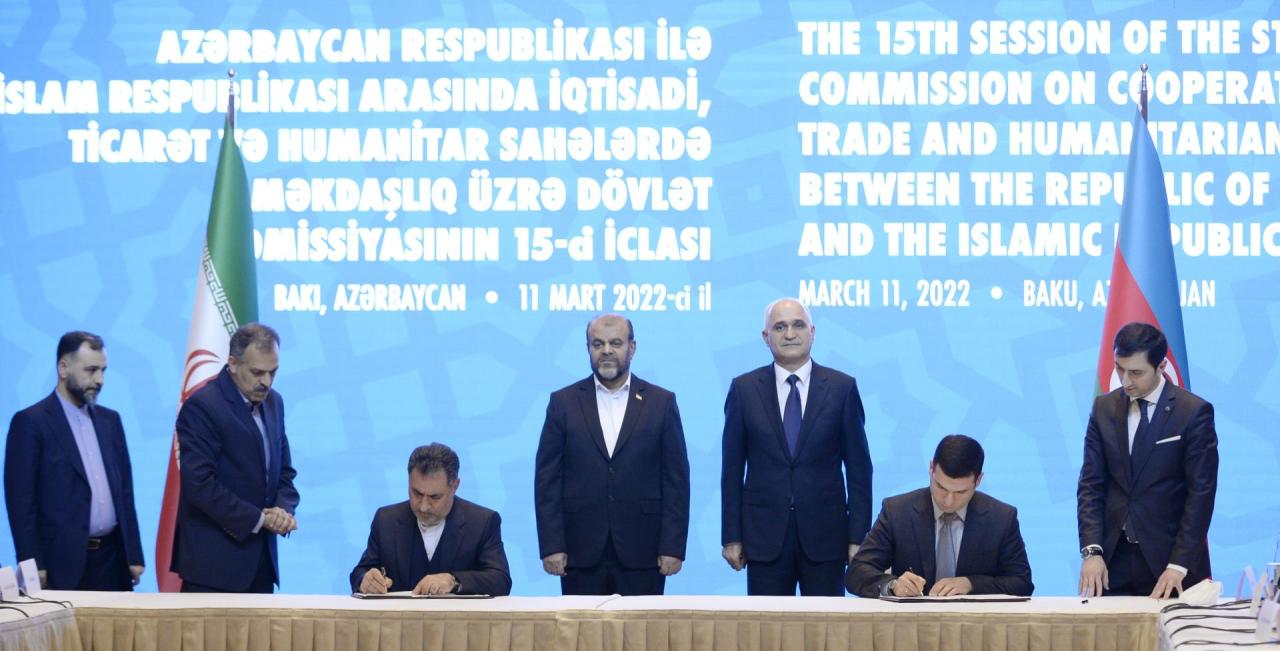 Azerbaijan and Iran plan to establish a new railway, highway, communication, and energy supply lines connecting mainland Azerbaijan to its exclave of Nakhchivan through the territory of Iran. / AZERTAC

Azerbaijan and Iran have signed an agreement to establish new transport and electricity supply links connecting mainland Azerbaijan to its exclave of Nakhchivan via Iran.

Azerbaijan’s Deputy Prime Minister Shahin Mustafayev and Iran’s Roads and Urban Development Minister Rostam Ghasemi signed the relevant memorandum of understanding (MoU) on March 11. The document was inked as part of the 15th meeting of the Azerbaijan-Iran State Commission on economic, trade, and humanitarian cooperation held in Baku.

According to the memorandum, the two countries plan to establish a new railway, highway, communication, and energy supply lines connecting Azerbaijan’s East Zangazur economic region and the Nakhchivan Autonomous Republic through the territory of Iran. Four bridges will be built over the Araz River, including two motorways (with a pedestrian crossing) and two railway lines on them.

During the meeting on March 11, Ghasemi expressed hope that relations between the two countries would reach an even higher level.

“Considering the geopolitical position of our countries, it is planned to increase the transit potential. Within the North-South corridor, this transit will reach a maximum,” Ghasemi said.

He further said that the activation of transport corridors that would connect two countries was in the spotlight.

According to Mustafayev, “despite the pandemic, the volume of cargo transportation by road between Azerbaijan and Iran has increased by 70 percent”.

In the meantime, Hikmat Hajiyev, Assistant to the Azerbaijani President and the Head of the Foreign Policy Affairs Department of the Presidential Administration, described the MoU as a “historic event.” According to him, as a result of the implementation of this project, “the long-term policy of Armenia on the blockade of Nakhchivan will be put to an end.”

Hikmat Hajiyev noted that the project changes the transport and communication landscape of the region as a whole. According to him, the project creates the basis for a new corridor in Eurasia, including roads, railways, power lines, and digital communications, by connecting Azerbaijan, Iran, and Turkey.

“We are confident that the new corridor will open up favorable opportunities for regional cooperation, development, and prosperity of the peoples of the region, as well as the expansion of economic and trade ties,” Hajiyev added.

The importance of the memorandum between Azerbaijan and Iran was also highlighted during the meeting of Azerbaijan’s President Ilham Aliyev and Minister Rostam Ghasemi on March 11.

According to a report by Azertag, it was noted that the new corridor would become a significant international corridor for both transport and electricity supply. The meeting also highlighted steps currently being taken to put into operation a new transport road, which will be a branch of the North-South Transport Corridor, which will create a good basis for cooperation both in the East-West and in the North-South direction.

Meanwhile, Azerbaijan and Iran also signed the “Protocol of the 15th meeting of the State Commission for Economic, Trade and Humanitarian Cooperation”. Some other documents were also inked between the Small and Medium Business Development Agency of Azerbaijan and Iran’s Small Industries and Industrial Parks Organization, as well as between the radio and TV organizations of the two countries.