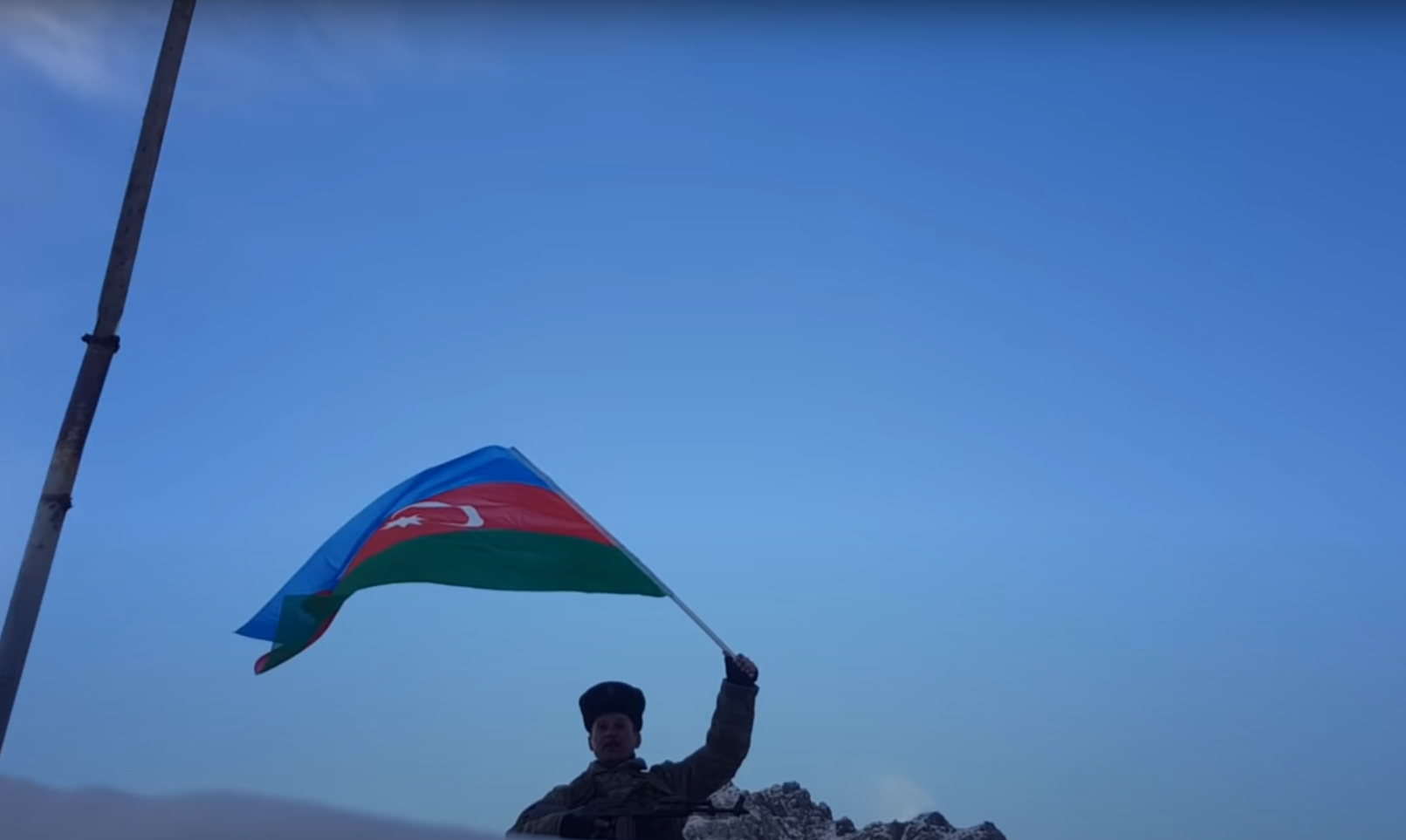 Azerbaijani soldier waves the country's flag as units of the national army enter the liberated Kalbajar district, November 25, 2020 / Ministry of Defense of Azerbaijan

The government of Azerbaijan slammed a resolution adopted Wednesday by the French senate that calls on the French authorities to recognize the illegal separatist regime in the Nagorno-Karabakh region of Azerbaijan as an independent state.

The Foreign Ministry of the Caspian country announced that the issues outlined in the resolution have been put forward by a group of pro-Armenian senators and it doesn't have a legal basis.

"We would like to emphasize that the resolution adopted by the Senate has no legal force. Nevertheless, given the political significance of the resolution, the imposition of such a resolution by a country with a mediating mandate seriously casts doubt on the country's neutrality. It also undermines France's reputation as a fair mediator in the Azerbaijani society," the ministry said in a statement issued on Wednesday.

Initially 305 senators out of 306 at the French Senate voted Wednesday to push the government to green-light the recognition of the self-declared illegal separatist regime in the occupied Nagorno-Karabakh region, which is an internationally recognized territory of Azerbaijan. The resolution serves as a recommendation and has no mandatory power.

However, shortly after the voting, a number of senators withdrew their votes, according to the European bureau of Report.az. Five senators declared themselves abstained, while three announced that they were refusing to vote. Appeals related with the changes have already been accepted and the voting results have been changed, meant the resolution got the OK from 297 senators.

The vote comes amidst reinforced efforts of the French government, French towns, and aid groups to help ethnic Armenians in the conflict zone. French cargo flights delivered medical supplies and other assistance tools to Yerevan last Monday and Friday.

French Secretary of State to the Minister for Europe and Foreign Affairs, Jean-Baptiste Lemoyne recalled that France is one of the mediators of the OSCE Minsk Group and such a unilateral recognition of Karabakh would not do any good for anyone and would not help boost mediation efforts.

Meanwhile, the French Foreign Ministry announced in a statement issued on Thursday that France does not recognize the self-proclaimed "Nagorno-Karabakh Republic." The ministry added that the responsibility of France as a co-chair of the OSCE Minsk Group is to work towards a negotiated settlement of the Nagorno-Karabakh conflict, taking into account the requirements of the security of the region's peoples.

The self-styled illegal "Nagorno-Karabakh Republic" in the occupied lands of Azerbaijan is not recognized by any state in the world, including its main sponsor Armenia. Azerbaijani authorities say they would cut diplomatic ties with any state recognizing the illegal separatist regime as an independent state in violation of Azerbaijan's internationally recognized territorial integrity.

Senior Aide to the President of Azerbaijan, Hikmat Hajiyev, said the French Senate's resolution is nothing but an ordinary piece of paper for Azerbaijan. It grossly violates international law, the UN Charter, and relevant UN Security Council resolutions and raises serious questions about France's intentions and objective activities as a co-chair of the Minsk Group.

"On November 10, 2020, a joint statement signed by the President of Azerbaijan, the President of Russia and the prime minister of Armenia ended the military escalation between Armenia and Azerbaijan and paved the way to practical measures to establish peace in the region. Unfortunately, it should be noted that, paradoxically, France, which is one of the co-chair of the OSCE Minsk Group, is trying to disrupt this agreement and reignite the conflict," Hajiyev said in a statement issued on Wednesday, adding it is a manifestation of the traditional Armenian fanaticism of the French political circles and raises serious concerns and questions in Azerbaijan.

The two South Caucasus neighbor countries Armenia and Azerbaijan have been at odds since the late 1980s with the dramatic rise in anti-Azerbaijan sentiments in Armenia, at the center of which stood the illegal claims for Azerbaijan's historic Nagorno-Karabakh (Daghlig Garabagh) region. Following the Soviet Union’s dissolution in 1991, Armenia kicked off a full-blown military aggression against Azerbaijan. The bloody war until a ceasefire in 1994 saw Armenia occupying 20 percent of Azerbaijan’s internationally recognized territories including the entire Nagorno-Karabakh region and seven surrounding districts. Over 30,000 ethnic Azerbaijanis were killed and one million others were forced to leave their homes. In 1993, the United Nations Security Council adopted four resolutions to demand immediate withdrawal of the occupying forces from Azerbaijani lands and return of internally displaced Azerbaijanis to their ancestral lands. Armenia failed to comply with all four legally binding documents.

The OSCE Minsk Group co-chairs - Russia, France, and the United States - must adopt a neutral position in the negotiation process under the chairmanship mandate. However, France took Armenia's side during the latest escalation of hostilities between Armenian and Azerbaijani forces in the Karabakh region of Azerbaijan from September 27 through November 10. President Emmanuel Macron has voiced solidarity with Armenia in the third day of the fighting in the Karabakh region on September 30.

The conflict in the Karabakh region of Azerbaijan spiraled on September 27 following decades-old ineffective political negotiations mediated by the OSCE Minsk Group. Armenia's forces deployed in the occupied Azerbaijani lands started shelling the military positions and civilian settlements of Azerbaijan to trigger hostilities. Azerbaijani army took immediate counter-offensive measures to push back Armenia's attack. Intensive deployment of military equipment and troops to the frontline by both sides catapulted the largest clashes between the sides since the ceasefire in 1994.

The decades-old status quo in the Karabakh region has been changed following significant regains of Azerbaijan during the fighting. Azerbaijani army liberated around 300 settlements, including five cities in the Karabakh region before the military operations ended in a ceasefire on November 10. The tripartite ceasefire statement signed by Azerbaijan, Armenia, and Russia sealed the return of the occupied Kalbajar and Lachin districts, and the occupied parts of the Aghdam district to Azerbaijan by Armenia. Aghdam and Kalbajar were returned to Azerbaijan on November 20 and 25, respectively. Armenia is set to return Lachin on December 1.