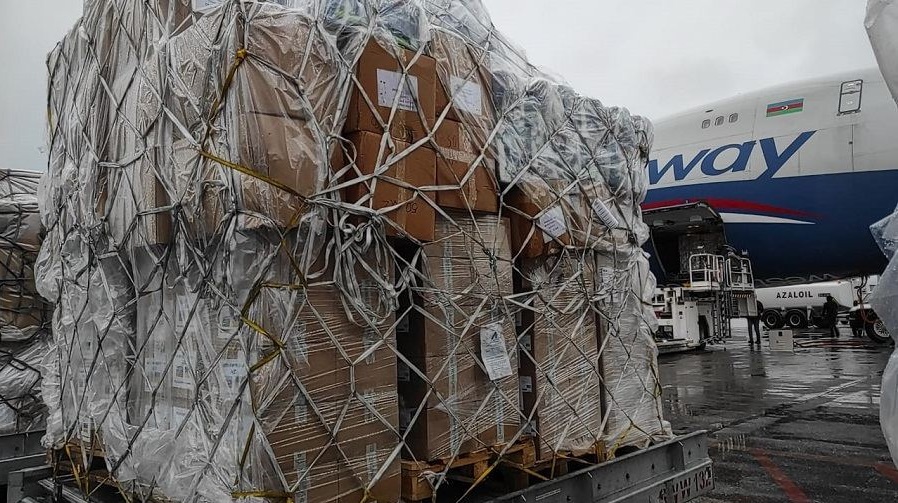 The humanitarian aid worth more than €5.5 million and weighing 380 tons was delivered to the Polish Rzeszow Airport located near the border with Ukraine. / Trend News Agency

Azerbaijan has dispatched another batch of humanitarian relief items to war-hit Ukraine.

The first plane carrying food, medical supplies and equipment, clothing, and personal care products left Azerbaijan’s capital early Saturday morning. The humanitarian aid worth more than €5.5 million and weighing 380 tons was delivered to the Polish Rzeszow Airport located near the border with Ukraine.

“The delivered items are saving the lives of hundreds of innocent people living under fire and in fear,” Ukraine’s Ambassador to Azerbaijan Vladyslav Kanevskyi told journalists.

Ukraine received the first batch of humanitarian aid from Azerbaijan on February 27 and 28, a few days after the Russian invasion. The aid package contained mainly medicines, medical supplies, devices, and equipment. Moreover, the Azerbaijani government instructed the state-owned oil company SOCAR to supply the ambulances and vehicles of the State Emergency Service with fuel free of charge in its gasoline stations in Ukraine.

Russian forces launched a major assault on Ukraine on February 24 after President Vladimir Putin’s address in which he announced the launch of a “special operation” on its western neighbor’s territory. The invasion by land, air, and the sea accompanied President Putin’s call on the Ukrainian military to lay down its arms.

According to the U.N. human rights office (OHCHR) data, at least 579 civilians in Ukraine, including 42 children, were killed and more than 1,000 injured in the ongoing hostilities.

“Most of the civilian casualties recorded were caused by the use of explosive weapons with a wide impact area, including shelling from heavy artillery and multi-launch rocket systems, and missile and air strikes,” reads the report.

At the same time, OHCHR believes that the actual figures are considerably higher since the receipt of information from some locations where intense hostilities have been going on has been delayed, and many reports are still pending corroboration.

The Russian military forces have reportedly targeted residential apartment blocks, a maternity hospital, a kindergarten, a hospital, and schools in various parts of the country. On March 12, a mosque sheltering more than 80 people, including children, was reportedly shelled by the Russian forces in the Mariupol city.

Around 1,300 servicemen of the Ukrainian army were killed since the invasion, Ukraine’s President Volodymyr Zelensky said on Saturday. The Ukrainian government is convinced that the ultimate goal of the Russian offensive is to capture the capital Kyiv and afterward force the Ukrainian military and civilian resistance to surrender.

“If they [Russians] use ‘carpet bombing’ and just decide to erase historical memory of this entire region, the history of Kyivan Rus, the history of Europe... Only by defeating us, they can enter Kyiv. Therefore, if that’s the goal, let them come,” Zelensky said in an interview with foreign media.