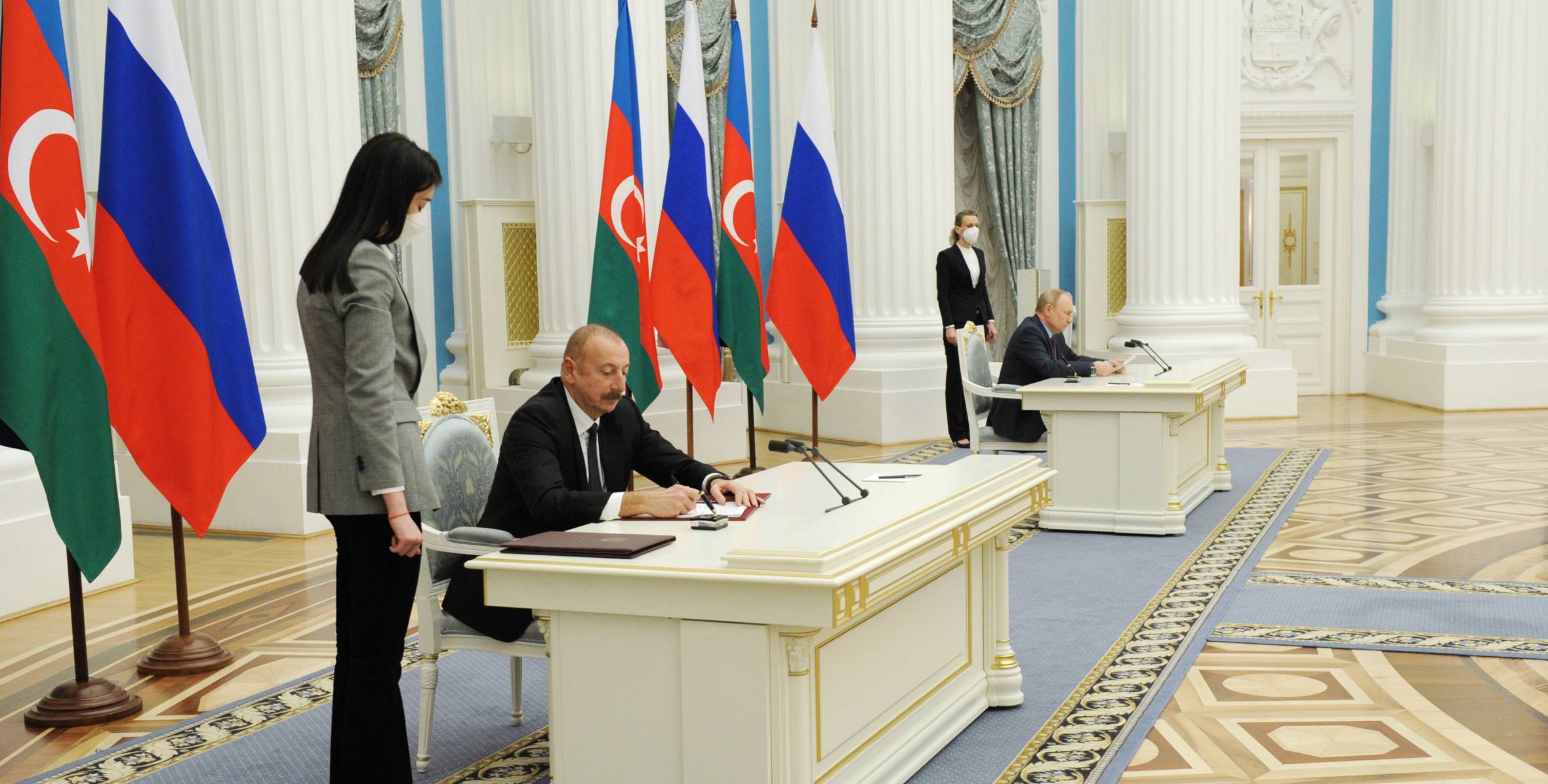 President Ilham Aliyev and his Russian counterpart Vladimir Putin agreed to develop a bilateral military cooperation under a declaration on allied interaction signed in Moscow on Tuesday.

Signed as part of the Azerbaijani president’s visit to Moscow, the document consists of 43 paragraphs, five of which involve military cooperation, including holding joint training activities of the two countries’ armed forces.

“The Parties will deepen interaction between the armed forces of the Russian Federation and the Republic of Azerbaijan, including holding joint operational and combat training activities, as well as developing other areas of bilateral military cooperation,” the document reads, according to President.Az.

According to the declaration, Baku and Moscow “may consider the possibility of providing each other with military assistance on the basis of the UN Charter, separate international treaties and taking into account the existing international legal obligations of each of the Parties” in order to ensure security, maintain peace and stability.

The document also addressed the military-technical cooperation between the sides, including interaction in the provision of modern weapons and military equipment. The military-technical cooperation also calls for intensifying efforts to create service centers for maintenance, repair, modernization of weapons and military equipment, as well as for organizing joint production of various types of military products.

“This Declaration brings our relations to the level of an alliance. This is both a great privilege and a great responsibility,” President Aliyev said as he made a press statement in Moscow.

Azerbaijan and Russia celebrate this year the 30th anniversary of the establishment of diplomatic relations in 1992.

The military-technical cooperation between the two countries has been developing within the Treaty of Friendship, Cooperation, and Mutual Security that came into force in 1998. According to the document, in the event of situations that threaten the security of one of the parties, Moscow and Baku can hold immediate consultations and also undertake not to participate in any actions or activities of a military, economic, and financial nature, including through third countries, directed against each other.

In 2003, the two countries signed an intergovernmental agreement on military-technical cooperation, which provides for the supply of Russian weapons and military equipment to Azerbaijan; training of the military personnel, and participation of Russian specialists in the repair, modernization, re-equipment, and disposal of military equipment of Azerbaijan. The next such document signed in 2006 calls for the mutual protection of rights to the results of intellectual activity used and obtained as part of bilateral military-technical cooperation.

Azerbaijan and Russia have concluded a total of more than 40 agreements in the spheres of military and military-technical cooperation. A bilateral intergovernmental commission has been coordinating the relevant issues since May 2006.

The two countries also cooperate in the field of military education and joint exercises. Since 2015, the Azerbaijani military has been participating in the International Army Games, combat training competitions that bring together Russian military personnel and armed forces of many foreign states. Russia and Azerbaijan have also been conducting joint exercises in the Caspian Sea and participating in the maneuvers of the Caspian region countries.

Russia is one of the largest arms suppliers to Azerbaijan. According to data compiled by the Stockholm International Peace Research Institute (SIPRI), Russian weapons and military equipment accounted for the lion’s share or nearly two-thirds of Azerbaijan’s defense imports over a decade from 2011 to 2020. President Aliyev said in 2018 that military-technical products purchased from Russia exceeded $5 billion.

The list of the Russian-made military equipment imported by Azerbaijan mainly includes T-90S battle tanks, armored vehicles such as BMP-3, BTR-82A and others, air defense systems of S-300 brand and others, Mi-35M and Mi-17-1V transport and combat helicopters, artillery, multiple rocket launchers such as Smerch and others.