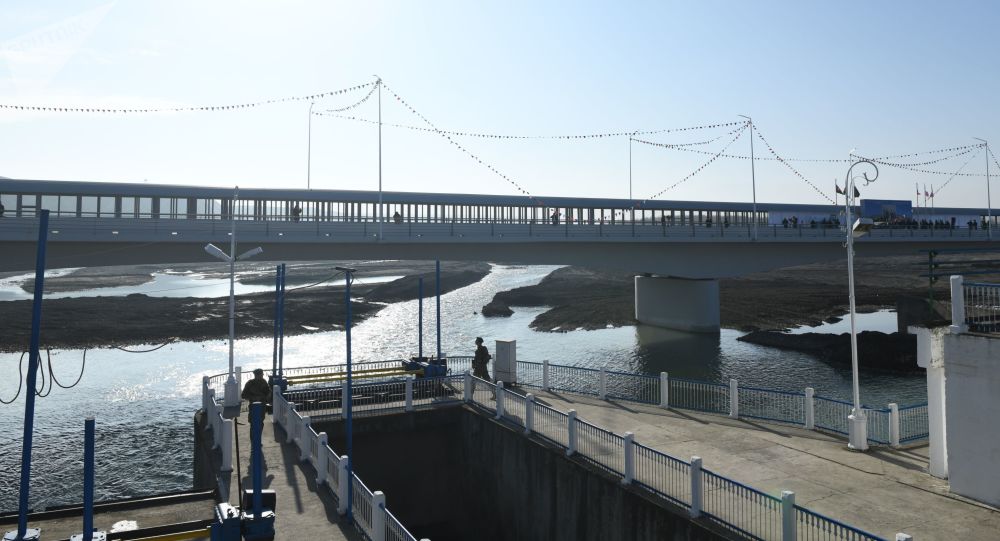 The five-span bridge is 325.3 meters (356 yards) long and 17.3 meters (19 yards) wide. It stretches from the Samur customs checkpoint in Azerbaijan to the Yarag-Gazmalar checkpoint in the Maharramkand region of Russia’s Dagestan Republic / Murad Orujov / Sputnik

The cross-border trade between Azerbaijan and Russia has been challenged by a deteriorated highway bridge that linked the two countries over the Samur border river since the late 1950s when both nations were part of the Soviet Union. The problem is now gone thanks to a new bridge that was launched on Tuesday and replaced the obsolete facility.

Officials from the governments of both Baku and Moscow, including Azerbaijan’s Deputy Prime Minister Shahin Mustafayev and Russia’s Economy Minister Maksim Oreshkin, attended the opening ceremony, where they addressed the advantages of faster and more convenient trade provided by the new bridge.

“This is a project with a long history, and it was not so easy to develop,” Oreshkin said at the opening ceremony, according to a report by Sputnik.

“There were problems, queues, which came up due to undeveloped infrastructure. And when the President of Azerbaijan Ilham Aliyev visited Sochi in September last year, final agreements were reached and now, this work ends with such a wonderful bridge.”

Baku and Moscow came to a consensus over the bridge’s construction in 2013, but the ground for the new structure was broken two years ago. The construction of the $21.5 million bridge was sponsored under a 50/50 partnership agreement signed by the governments of Russia and Azerbaijan. It has replaced an obsolete existing structure that was built and commissioned in 1957 during the Soviet Union’s reign.

The five-span bridge is 325.3 meters (356 yards) long and 17.3 meters (19 yards) wide. It stretches from the Samur customs checkpoint in Azerbaijan to the Yarag-Gazmalar checkpoint in the Maharramkand region of Russia’s Dagestan Republic. The facility consists of two highways and one pedestrian lane. Two lanes will be open to traffic regularly, while the third reserve lane will come online only during the rush hours.

Minister Mustafayev said the new bridge promises a lot for an increase in trade operations between the two Caspian Sea nations and is expected to boost the decades-old trade relations of the neighboring countries.

“The bridge across Samur will contribute to the expansion of trade operations. There is a steady increase in trade between our countries,” the Azerbaijani government official said, according to a report by Sputnik.

“Commodity circulation has already increased by 23 percent, and simplification of customs procedures and the launch of the “Green Corridor” system will contribute to its even greater growth.”

In 2018, the overall trade turnover between Azerbaijan and Russia accounted for $2.55 billion, making Russia Azerbaijan’s third-largest foreign trade partner behind Turkey and Italy. The same figure exceeded $1.9 billion in January-September of this year following a 26 percent increase. Imports into Azerbaijan from Russia grew by 30.7 percent reaching $1.4 billion as compared to the same period last year, while Azerbaijani exports to Russia stood at $546.7 million after 14.5 percent increase. Russia is reportedly the main market for the export of “Made in Azerbaijan” branded non-oil products.

Meanwhile, the authorities of both Azerbaijan and Russia hope to leverage their participation in the formation of the International North-South Transport Corridor (INSTC). The 7,200 km (4,474 mi) multi-modal network of rail, road, and sea routes is expected to facilitate cargo deliveries from the India-Southeast Asia region to Russia and the Baltic Sea zone, and backward. INSTC will cut cargo delivery time on similar distances in half, from six weeks to three weeks, and open an all-new distance that is 3,000 km (1,864 mi) shorter than conventional routes.

According to expert estimations, goods transportation on INSTC through the territory of Azerbaijan may reach 7 million tons annually in mid-term perspectives, while it is anticipated to be 13 million tons in the longer term. The bulk share of cargo conveyance via the country, located at the crossroads of Asia and Europe between Russia and Iran on the western shores of the Caspian Sea, is expected to be formed by Russian cargo going to India and Iran and back from these countries.