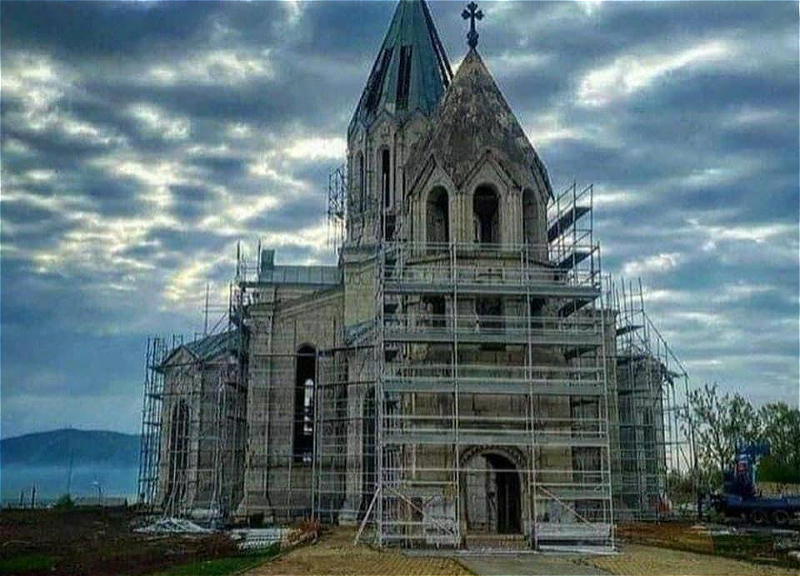 In the photos that recently went viral on social media, the Gazanchi Church is seen fenced in for repair after last year’s bloody war in Azerbaijan's Karabakh region. / Courtesy

The historical, cultural and religious monuments in the liberated Karabakh region of Azerbaijan are being restored as part of the major restoration and reconstruction campaign launched by the country's government in the war-torn region.

The Gazanchi Church in the liberated city of Shusha is one of the buildings to be restored as an example of the Christian heritage of Azerbaijan.

“At present, huge reconstruction works are being carried out in these territories, including the restoration of our historical, cultural and religious heritage, which was destroyed during the decades-long Armenian occupation,” Azerbaijan's Foreign Ministry said in a statement last week.

“Mosques, historical monuments, mausoleums, house-museums, as well as the Gazanchi Church are being restored in the frame of large-scale reconstruction work in Shusha. We would like to note that, this reconstruction is carried out in accordance with the original architectural style in order to restore the historical image of Shusha.”

The ministry explained that the large-scale restoration campaign in Azerbaijan’s liberated territories aims to repair infrastructure and historical sites that were vandalized by Armenia during its decades-long illegal occupation of those lands.

In the photos that recently went viral on social media, the Gazanchi Church is seen fenced in for repair after last year’s bloody war in Azerbaijan's Karabakh region. The Azerbaijani authorities developed a restoration blueprint based on the original architectural image of the church.

Azerbaijan restored its sovereignty in Shusha after 28 years of its illegal occupation by Armenia last year. The 44-day war in the Karabakh region ended with Azerbaijan's decisive victory over Armenia. Azerbaijani forces liberated over 300 settlements, including five major cities in the Karabakh region that had been kept under occupation by Armenia since the early 1990s. The liberation of Shusha came during the final days of the war and was crucial in the retreat of Armenia’s forces and the signing of a tripartite agreement by Azerbaijan, Armenia and Russia on November 10, 2020. Armenia returned three more districts to Azerbaijan’s control within its obligations under the agreement.

Shortly after Shusha’s liberation, Azerbaijan’s President Ilham Aliyev declared the city as the cultural capital of Azerbaijan and launched a large-scale restoration campaign in the city. Nearly the entire infrastructure of Shusha, including historical and cultural monuments was damaged during the Armenian occupation. Tens of mosques, churches, and sanctuaries, as well as memorials, tombs, castles, house-museums, and palaces, were ransacked and destroyed by Armenians over the years.

Meanwhile, the authorities in Yerevan tried to introduce Azerbaijan's restoration activities at Gazanhci Church as a deliberate plan aimed at removing so-called Armenian traces in what they believe is an Armenian church. Azerbaijan’s government refuted those allegations.

Analysts and scholars have also rejected Armenia's claims for the Gazanchi Church.

Baku-based Doctor of Philosophy in History, Adalat Mustafayev, says the fact that Shusha and other territories of Azerbaijan were subjected to acts of mass vandalism by Armenians proves that there was no original ethnic Armenian population in the Karabakh region. He described the construction of so-called Armenian churches, including the Gazanchi Church in the Karabakh region as an illusion.

“Throughout history, there have been no Armenians on the territory of Karabakh. Therefore, the presence of an Armenian church in Shusha is impossible. This is confirmed by historical facts, and all the opinions put forward by the Armenians on this issue are groundless,” Mustafayev explains. “According to the information available to us, the foundation of this church was laid after 1806 on the territory of the [Azerbaijani] Karabakh Khanate.”

According to Mustafayev, there was no Christian church in Shusha until the region was occupied by Tsarist Russia, and Russian officers and soldiers were deployed there.

“Over the years, the resettlement of Armenians to the territory of Karabakh has started. Thus, in the territory of Karabakh, the restoration of historical monuments was allegedly carried out after the arrival of the general of Tsarist Russia of Armenian origin [Valerian] Madatov. Then, the [Russian] Orthodox Church of Gazanchi began to operate as an Armenian church. There is no evidence that the temple claimed by the Armenians was built in 1868-1887,” Professor Mustafayev says.

The Russian Empire relocated Armenians to Azerbaijani territories from Iran and Turkey in the wake of a victory over Iran the 1804-1812 war. As a result, northern parts of Azerbaijan, except Iravan (modern-day Yerevan) and Nakhchivan were incorporated into the Russian empire. Another war, lasting from 1826 until 1828, resulted in Iravan and Nakhchivan, the entirety of Azerbaijan’s northern lands, being occupied by Imperial Russia, while the southern territories fell under Iran’s control.

A special commission was established to deal with the deployment of Armenians from Ottoman and Iranian territories to the South Caucasus. As a result of the relocation, the number of Armenians in the Karabakh region reached 18,000 between 1828 and 1829 and increased to 34,606 by 1843. The next wave of deployment of Armenians into the South Caucasus by Russia lasted from 1904 to 1915, when over 260,000 ethnic Armenians were placed there. Despite protests, around 130,000 Armenians were relocated to the provinces of Iravan and Yelizavetpol (the name of Azerbaijan’s Ganja city during Tsarist Russia's period).