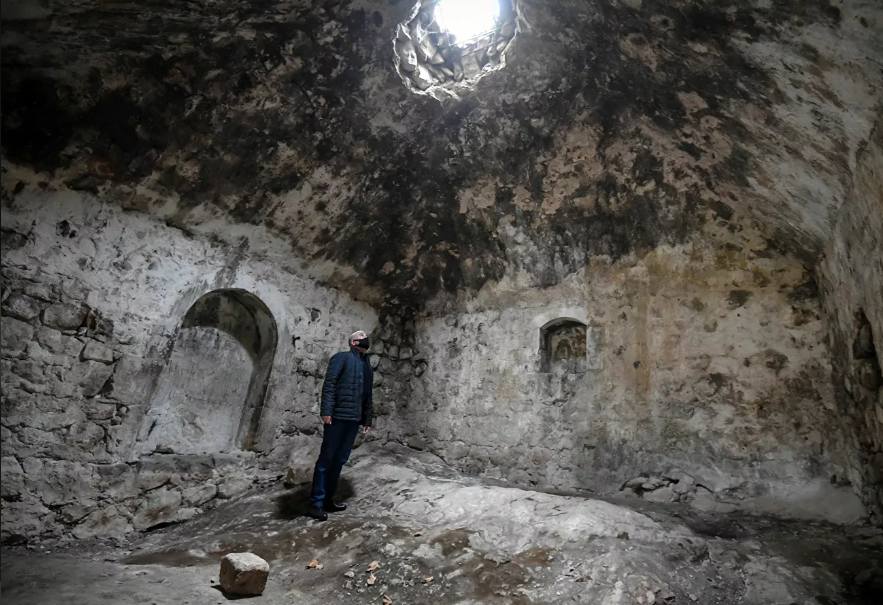 The Beshikdagh temple in Aghdam district is one of the churches that suffered from Armenian vandalism during the years of Armenian occupation, December 6, 2020, Aghdam, Azerbaijan / Aleksey Kudenko / Sputnik Azerbaijan

The government of Azerbaijan has been taking a sensitive and responsible approach toward the legacy of all religions, including Christian landmarks in the territories liberated from the Armenian occupation, denying Armenian accusations of the so-called destruction of the Christian heritage.

Shortly after restoring the territorial integrity in 2020, the Azerbaijani authorities drafted several action plans to rehabilitate historical, cultural, and religious monuments in the liberated lands. Almost all monuments in Azerbaijan’s Karabakh region suffered from Armenian vandalism during nearly 30-year-long illegal Armenian occupation, and the Christian temples and churches are not an exception.

During his visits to the liberated districts, President Ilham Aliyev has personally exposed the traces of the cultural vandalism committed by Armenians in multiple Christian temples.

An ancient Albanian temple in the Hunarli village of the Khojavand district, the White Cross temple near the Hadrut settlement, and the Blessed Virgin Mary Church, also located in the Khojavand district, were desecrated and deliberately refashioned as “Armenian churches.” Armenians almost completely destroyed a Russian Orthodox church in Khojavand during the decades of occupation. The Gazanchi church in the city of Shusha and the Albanian temples such as the Beshikdagh church in the Aghdam district, the Ganjasar and Khudavang monastery complexes in Kalbajar, the Aghoghlan temple in Lachin, the Holy Elysee temple complex in Aghdara, and some other monuments of the Albanian heritage have also been exposed to cultural vandalism and “Armenianization” policy conducted by Armenians during the decades of illegal occupation.

Azerbaijan’s Culture Ministry inscribed all Christian monuments in the Karabakh region in the list of monuments of national importance and supported the state-run campaign to restore the religious heritage in the liberated lands. On November 14, 2020, President Aliyev said Azerbaijan would properly protect the Christian temples located in the liberated territories, and Christians living in the country would be able to use these temples.

The Gazanchi Church in the liberated city of Shusha can be listed as one of the buildings being restored as an example of the Christian heritage of Azerbaijan. The restoration blueprint of the church was developed based on its original architectural image. Another example is the St. John the Baptist Russian Orthodox church in Shusha, which is also set to regain its historical appearance altered by Armenians. During the illegal Armenian occupation, the original dome-shaped roof of the temple, which is typical of Russian architecture, has been replaced with a conical dome in order to remodel the building as an “Armenian church.”

Azerbaijan has been rehabilitating the monuments of the Christian heritage in the Karabakh region which are the legacy of Caucasian Albania, an ancient Azerbaijani state, and the estate of the Russian Orthodoxy and unambiguously rejecting any statement claiming it to belong to the Armenian Gregorian Church.

According to data compiled by the Azerbaijani government, prior to the occupation of the Karabakh region by Armenia, there were 139 places of worships and temples, of which 128 were Albanian temples and monasteries and three Orthodox temples.

Udins living primarily in the northern Gabala and Oghuz regions of Azerbaijan are direct descendants of Caucasian Albania. Nearly 4,000 Udins are settled in Gabala’s Nij village, and 100 live in Oghuz. There are two Albanian temples in Nij. Members of this ancient tribe can also be found in the capital Baku, as well as the city of Sumgait of Azerbaijan. Russia, Georgia, Uzbekistan, and Kazakhstan are also home to groups of Udins. The largest number of Udins in the world live in Azerbaijan.

The Azerbaijani Albanian-Udi religious community succeeded the Albanian (Caucasian) Independent Apostolic Church. The Albanian Apostolic Church, as the first apostolic church in the Caucasus, has a long history and has left indelible marks on the religious and cultural life of the people of Azerbaijan and the entire Caucasus. However, after various pressures and influences, the Albanian Apostolic Church was abolished by the Russian empire in 1836. The invalidation of the church paved the way for the Armenian-Gregorian church to claim part of its cultural and spiritual heritage for the purpose of “Gregorianization.”

Turkish-Islamic researcher Telman Nusratoghlu is also convinced that the monasteries and temples in Azerbaijan’s Karabakh region are the historical heritage of Caucasian Albania, an ancient Azerbaijani state that was founded sometime before the 6th century BC and lasted until the 8th century AD.

“Everyone should know that Agoghlan Monastery in the Lachin region, Khudavang complex in the Kalbajar region, the Holy Elysee temple complex in the Aghdara region, and the Ganjasar monastery therein are the historical heritage of Caucasian Albania, which is the first Christian state in the South Caucasus" he wrote in an article, adding that Caucasian Albania united Turkic and Caucasian tribes under one flag and played an important role in the formation of the ethnogenesis of the Azerbaijani Turks.

Today, 24 Christian religious communities hold prayers in 16 churches in Azerbaijan. Four percent of the ten million population of Azerbaijan is constituted by the worshippers of the Russian Orthodox Church; Georgian Orthodox Church; Armenian Apostolic Church; Seventh-day Adventists; Molokan Church; Roman Catholic Church; other Christians, including evangelical churches and Jehovah’s Witnesses, as well as Jews and Baha’is, and the International Society of Krishna Consciousness, according to 2019 Report on International Religious Freedom: Azerbaijan released by the US Department of State.