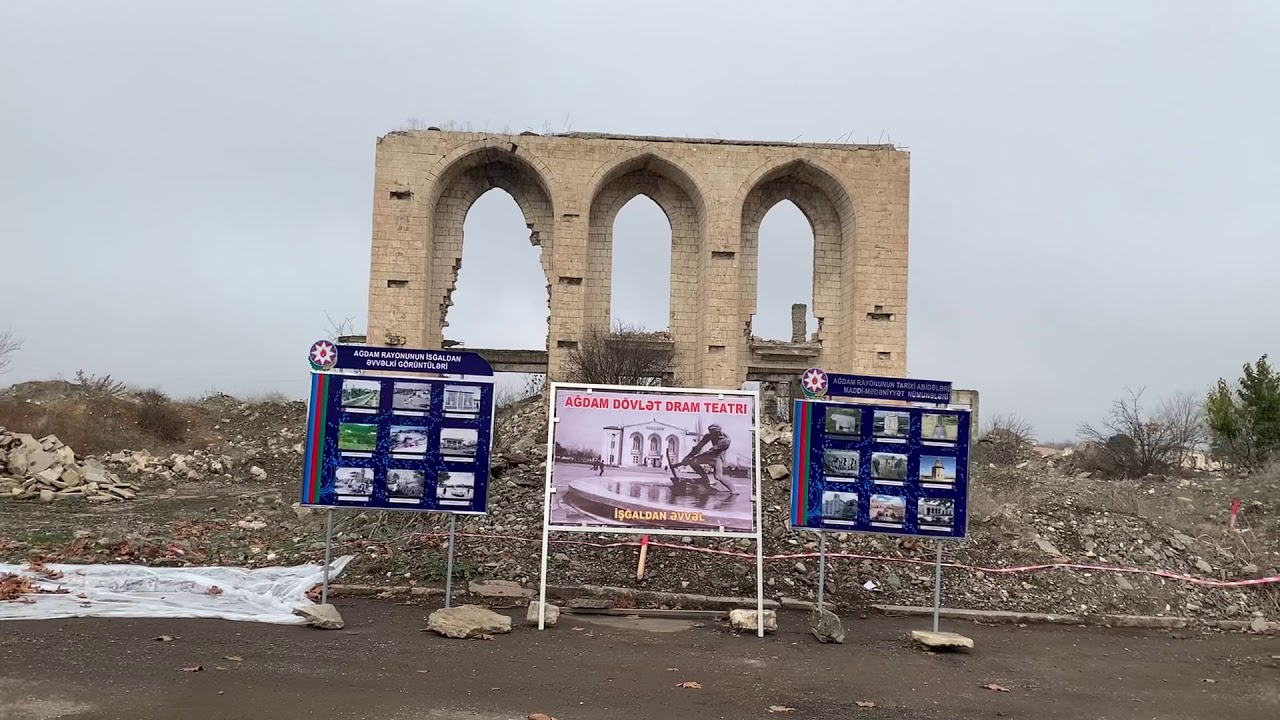 The ruins of the State Drama Theater in Aghdam, which was occupied by Armenia's forces on July 23 in 1993, and was returned to Azerbaijan on November 20, 2020 / Courtesy

The foreign ministry of Azerbaijan has responded to UNESCO's claims suggesting that Azerbaijan delayed responding to the organization's appeal for sending a mission to assess the damage to cultural assets in Azerbaijan's Nagorno-Karabakh region and surrounding districts.

The press service of the ministry said in a commentary published on Tuesday that Baku's commitment to cooperating with UNESCO and fulfilling its obligations under relevant conventions, including those related to the protection of cultural heritage, is not a subject to discussion.

"However, it has to be regretfully noted that during the 30 years of Armenia's military aggression against Azerbaijan and the occupation of our lands, our appeals to UNESCO to investigate war crimes such as the deliberate destruction, misappropriation, alteration of our cultural heritage, as well as illicit removal of our cultural properties by Armenia have been ignored and the UNESCO Secretariat has not demonstrated determination in this regard," reads the commentary.

UNESCO said in a press release on December 21 that it proposed to dispatch an independent mission of experts to Azerbaijan's Nagorno-Karabakh region and surrounding districts for drawing a preliminary inventory of significant cultural properties. Both Azerbaijan and Armenia were requested to render necessary assistance for realizing the mission, however, Azerbaijan is yet to response, UNESCO said.

Azerbaijani foreign ministry's press service said UNESCO was informed that the proposal is under review, while a number of factors, including security, weather, and difficult terrain, must be taken into account before allowing a UNESCO mission to visit the those lands to assess the damage to the cultural properties of Azerbaijan. Results of the Azerbaijani culture ministry's preliminary monitoring of the cultural heritage in the liberated lands have been submitted to UNESCO, including the photos of destruction and desecration of Azerbaijan's cultural assets by Armenia, the press service explained, adding Baku hopes that UNESCO will not remain silent to Armenia's war crimes.

"We believe that UNESCO must fulfill its mandate in an independent and objective manner and not allow the issue of protection of cultural heritage to be politicized. Such statements by UNESCO do not comply with the spirit of cooperation between Azerbaijan and UNESCO," the press service's commentary reads.

The Nagorno-Karabakh region and seven surrounding districts of Azerbaijan fell under Armenia's occupation in a war that ensued from the latter's illegal claims to historical Azerbaijani lands. Following the dissolution of the Soviet Union, Armenia launched a full-fledged armed attack on Azerbaijan's Karabakh region. The bloody war in 1991-1994 resulted in Armenia occupying 20 percent of Azerbaijan’s internationally recognized territories – the Nagorno-Karabakh (Daghlig Garabagh) region and seven surrounding districts, including Lachin, Kalbajar, Aghdam, Fuzuli, Jabrayil, Gubadli, and Zangilan. Over 30,000 ethnic Azerbaijanis were killed and one million were expelled from those lands in a brutal ethnic cleansing policy conducted by Armenia. Although the United Nations Security Council adopted four resolutions in 1993 demanding the immediate withdrawal of the occupying forces from the Azerbaijani lands and the return of internally displaced Azerbaijanis to their ancestral lands, Armenia failed to comply with all four legally binding documents.

The latest outbreak of war in Azerbaijan's Karabakh region started with attacks by Armenia's forces deployed in the occupied Azerbaijani lands on the military positions and civilian settlements of Azerbaijan on September 27. The attacks triggered the Azerbaijani forces to take immediate counter-offensive measures for pushing back the assault. Azerbaijani forces liberated over 300 settlements, including five major cities from Armenia's occupation. As part of the tripartite ceasefire statement signed by these two countries and Russia on November 9, Armenia returned the occupied Aghdam, Kalbajar and Lachin districts to Azerbaijan by December 1.

According to data compiled by the culture ministry of Azerbaijan, based on the statistics from the early 1990s, some 2,625 monuments were registered in the occupied territories, of which 706 were protected by the state. Hundreds of cultural institutions, including 927 libraries with 4.6 million books, 808 palaces of culture, clubs and houses of culture, 85 music and art schools, 22 museums and museum branches with more than 100,000 exhibits, 4 art galleries, 4 theaters, 2 concert halls, 8 culture and recreation parks, as well as one of the oldest settlements in the world in the Khojavend district - the Azikh cave; the Shusha State Historical-Architectural Reserve and Govhar Agha Mosque in the same city, Aghdam's Bread Museum and Drama Theater, tens of mosques and cultural buildings in Aghdam, Fuzuli, Jabrayil, Zangilan, Gubadli, and other districts have been targeted by Armenian vandalism. Mosques have been transformed into barns for pigs and cattle during Armenia's occupation of Azerbaijani territories.

Aghdam was referred to as the "Hiroshima of the 21st Century" or "Hiroshima of the Caucasus" by international journalists, including prominent French photographer Reza Deghati, and media outlets. Azerbaijan's President Ilham Aliyev showed the massive destruction in the "ghost towns" of Aghdam, Fuzuli, Jabrayil, Zangilan, and Gubadli during his visits to the districts post-liberation.

"Look what these [Armenian] savages have done to our city! They have destroyed everything; they have demolished houses and destroyed the entire infrastructure. There is not a single building standing," President Aliyev said in Fuzuli.

The government of Azerbaijan launched proceedings for calculating the cost of damages caused by Armenia over three decades in the once occupied Azerbaijani territories. Baku plans to sue Yerevan in international courts for the acts of vandalism that left the historical lands of Azerbaijan in ruins.