Azerbaijan Rejects Iran's Allegations of Israeli Presence Near Its Borders 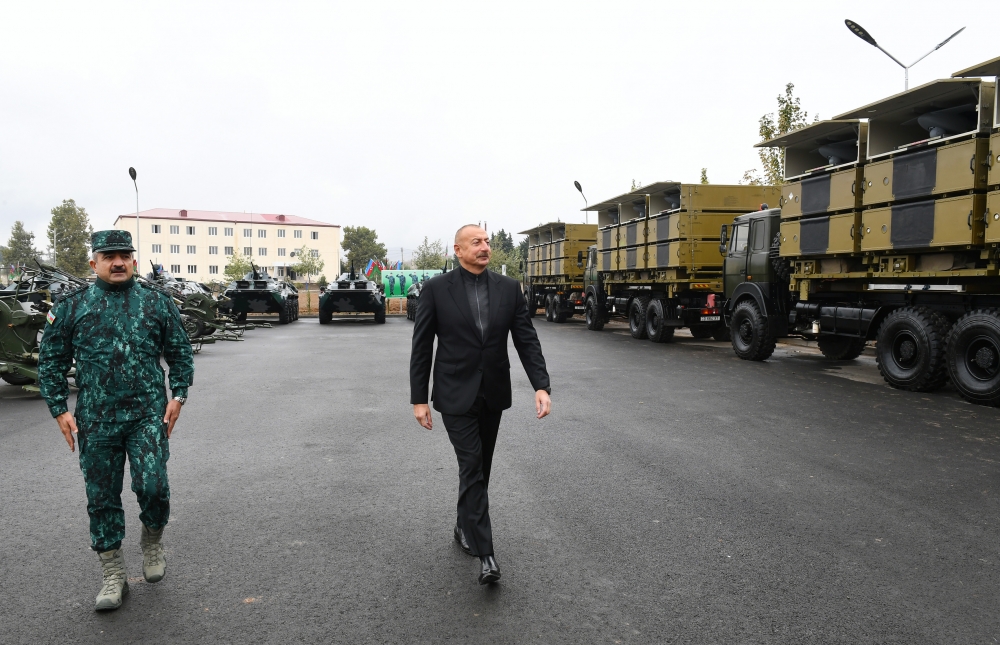 Azerbaijan's President Ilham Aliyev attended the inauguration of a complex of the military unit of the State Border Service in the southern district of Jabrayil on October 4, 2021. / Azertag

Azerbaijani President Ilham Aliyev has described Iran's allegations about the presence of the Israeli forces in the country's territories as “baseless”.

"We are showing good intentions. But this does not mean that we will accept baseless accusations against ourselves. I am saying this to the Azerbaijani people and the whole world here in Jabrayil, on the banks of the Araz River, that all baseless accusations against us will not remain unanswered," President Aliyev said during his visit to the southern district of Jabrayil on October 4.

The president’s response came after some Iranian government officials had voiced their concern about the alleged presence of Israelis along the border between Iran and Azerbaijan.

"Some Iranian provincial mullah recently opened his mouth and fabricated slander against Azerbaijan. When I was informed, I said not to pay attention," President Aliyev said.

"Then, unfortunately, some government officials started making unfounded accusations against us – Azerbaijan has allegedly brought Israel to these regions. Let them open their eyes wide and look. Where did they see Israel here? Not a single person lives here. There is no building here. Is there evidence? No. If there is no evidence, everyone should be held accountable for what they say. We cannot allow anyone to fabricate baseless slander against us," the Azerbaijani president stressed.

Iran has recently accused Azerbaijan of "allowing foreign forces to be present in the region". On October 1, Iran launched a large-scale military exercise near its border with Azerbaijan which was reportedly meant as a message to its arch-enemy Israel.

Relations have soured between the two countries over the past few weeks following illegal trips by Iranian lorries to certain parts of Azerbaijan's Karabakh (Garabagh) region, where the Russian peacekeeping forces are temporarily deployed. On August 11, Iran’s ambassador to Azerbaijan received a Note Verbal from the foreign ministry in addition to an earlier verbal notification about Baku’s dissatisfaction with the illegal transit of goods to the Karabakh region.

However, the verbal notification and Note Verbal were ineffective in settling the controversy. Around 60 Iranian trucks illegally traveled to Azerbaijan’s Karabakh region from August 11 to September 11. The trucks moved from Iran to Armenia, then to the Karabakh region via the Lachin corridor. On September 15, Azerbaijan detained two Iranian truck drivers for illegally crossing into the territory of Azerbaijan.

In an article published on October 3, Iranian hardline newspaper Javan called for the establishment of an Iranian military base in southern Armenia to "calm down the turbulence to the north of the Araz River".

Javan's article comes after Iran's Supreme Leader Ali Khamenei warned neighboring countries against reliance on foreign forces to ensure their security, saying that "the events that are taking place in the northwest of Iran, in some neighboring countries, should be resolved with the same logic of avoiding the presence of foreigners".

Azerbaijan has repeatedly denied Iran's allegations of the presence of "third forces" in the country.

"In general, the existence of any forces in the territory of Azerbaijan, including terrorist elements, that could pose a threat to our state or neighboring countries, cannot even be a subject of discussion. Unfortunately, during the 44-day war [between Armenia and Azerbaijan in the Karabakh region], some parties made such completely baseless claims. We stated then, and we reiterate now, that such allegations are baseless and no evidence has been presented to the Azerbaijani side so far," the Azerbaijani Foreign Ministry said in a statement on October 4.

The tripartite agreement addressed the temporary deployment of a Russian peacekeeping contingent comprising 1,960 servicemen, 90 armored personnel carriers, and 380 units of an automobile and special equipment in certain parts of Azerbaijan’s Karabakh region, including the city of Khankendi.