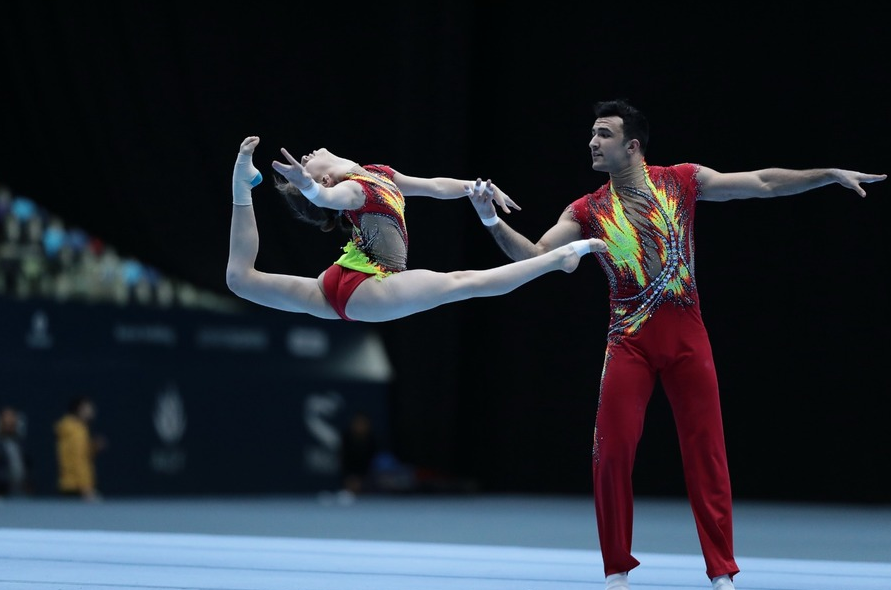 Azerbaijan’s capital city Baku is gearing up to host the FIG Acrobatic Gymnastics World Cup at the National Gymnastics Arena, namely from November 17 to 18. The two-day event will feature national teams from Azerbaijan, Belarus, India, Israel, Kazakhstan, Russia and Ukraine.

“I think that our gymnasts are ready for the Cup by 98 percent, and the remaining two percent always include unpredictable moments. They are well prepared, for us this program is new, we started to work on it only this year,” she said promising a “serious competition” despite strong rivals from Russia, which has a history of dominating the sport globally.

Athletes from Azerbaijan took the stage for pre-competition podium training in the National Gymnastics Arena on November 13, where they tested their readiness through an all-inclusive final rehearsal ahead of the FIG Acrobatic Gymnastics World Cup in Baku.

“The training was successful,” Azerbaijani national gymnast Seymur Jafarov told Trend. “There were some negative moments, but there is still time to correct them. I hope that we will perform successfully at the World Cup. We are both physically and psychologically ready.”

Acrobatic gymnastics, also known as sports acrobatics, is a competitive gymnastic discipline where gymnast pairs and/or groups perform the figures such as acrobatic moves, dance and tumbling together under specifically choreographed music. Pairs usually consist of two women, two men or one woman and one man. The number of athletes in groups are three.

Three types of routines comprise the acrobatic movements - a balanced routine with the main focus on strength, poise and flexibility; a dynamic routine of throws, somersaults and catches; and a combined routine, or the mixture of elements from both balance and dynamic.