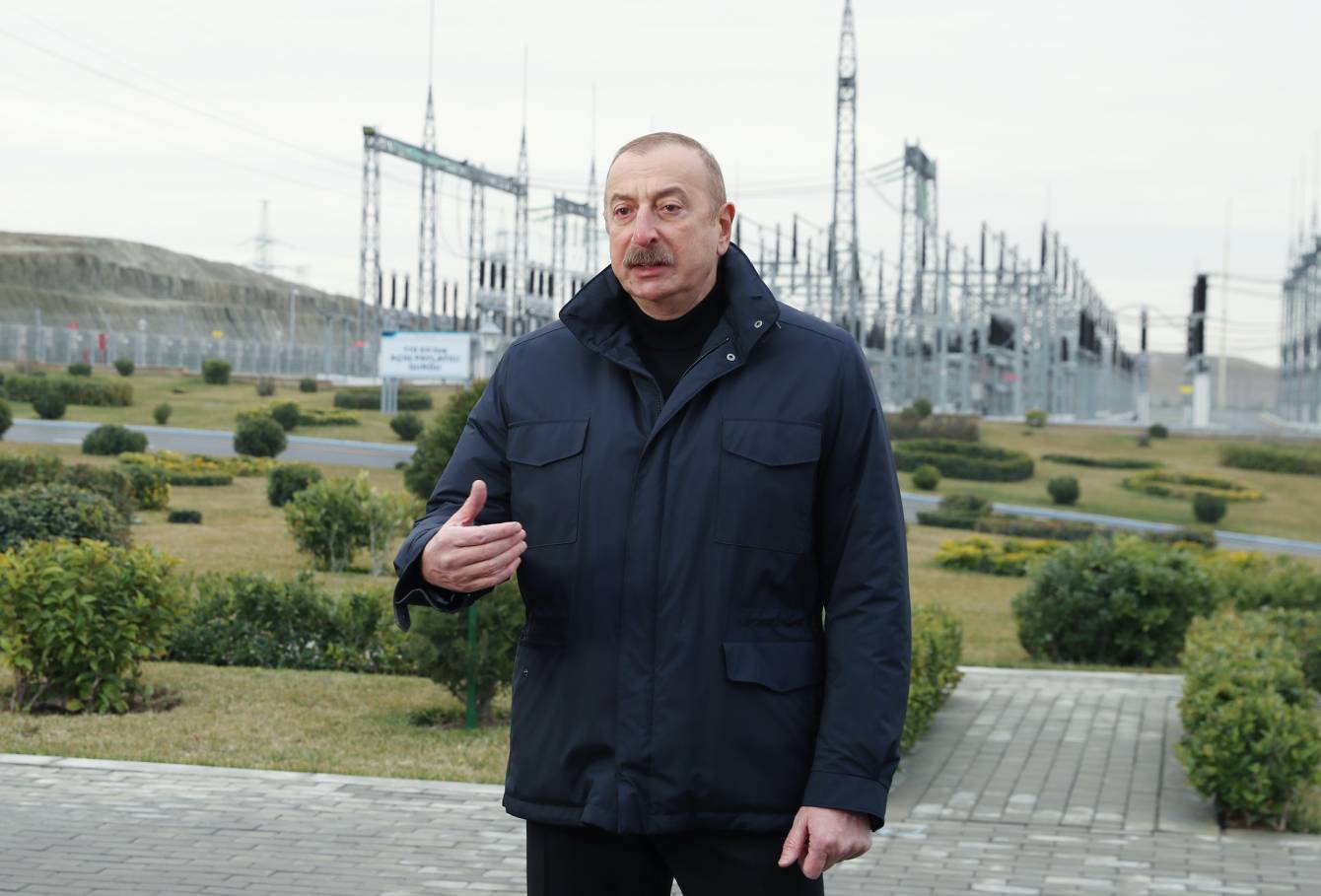 President Ilham Aliyev gives an interview to the state news agency in Gobu, a settlement in the outskirts of capital Baku, February 11, 2022 / President.Az

Baku has been doing serious work to fully engage the national non-conventional energy sources, and results are already visible, according to President Aliyev.

“Last month, a groundbreaking ceremony was held under a contract signed between “ACWA Power,” one of the largest companies in the field, and Azerbaijan. A 240-megawatt wind farm will be commissioned next year,” the president said in an interview with the state news agency last week.

In January 2022, the ground was broken for a wind power plant in Azerbaijan’s Absheron and Khizi districts. ACWA Power, a Saudi energy giant, partly owned by Saudi Arabia’s sovereign Public Investment Fund, will reportedly invest $300 million in the project. The “Khizi-Absheron” wind power plant is expected to churn out 1 billion kilowatt-hours (kWh) of electricity per annum. The plant will be commercially operable in the third quarter of 2023.

Last year, Azerbaijan’s Energy Ministry and BP inked an agreement to evaluate and implement a photovoltaic power station plant in Jabrayil, one of the Azerbaijani districts liberated from the Armenian occupation. A “green energy” zone will be established in the liberated territories under the project, which sits well with Azerbaijan’s commitment to reduce carbon emissions by 35 percent by 2030 and BP’s long-term “net zero emissions” goal set for 2050. The agreement ushers in cooperation for technical and commercial evaluation of the solar energy project, plant design, financing provision, and final investment decision adoption through a jointly managed committee.

In January 2020, UAE’s Masdar secured a contract with Azerbaijan’s Energy Ministry for developing, building, and operating a 230-megawatt (MW) solar power park on the outskirts of the capital Baku. The investment agreement for the project was signed last year.

The renewable energy projects implemented by ACWA Power and Masdar are expected to help Azerbaijan save 300 million cubic meters of natural gas, equal to 10 percent of the total volume of blue fuel consumed by the country’s population annually.

Meanwhile, President Aliyev said Azerbaijan was working with Iran to launch the “Khudafarin,” the third-largest hydropower station in Azerbaijan, and “Giz Galasi” reservoirs over the Araz river. The power plants will jointly produce 716 million kilowatt-hours of electricity annually. Both facilities are expected to come online sometime in 2022.

Renewables are expected to make up 30 percent of the country’s electricity generation by 2030. Estimates put the renewable energy potential of Azerbaijan at 37,000 MW, ten thousand of which has been unveiled after the liberation of the country’s territories from the Armenian occupation in 2020.

The potential of wind power for enhancing the replenishable energy capability of Azerbaijan stands at 59.2 percent of the overall renewable sources, according to a report “Market Analysis Azerbaijan 2019” published by the German-Azerbaijani Chamber of Commerce.

Meanwhile, according to the same publication, solar power comes in at number two with a total of 8,000 MW potential. Biomass, geothermal, and hydropower (excluding large hydropower stations) are also introduced as promising renewables at 900 MW, 800 MW, and 650 MW, respectively.