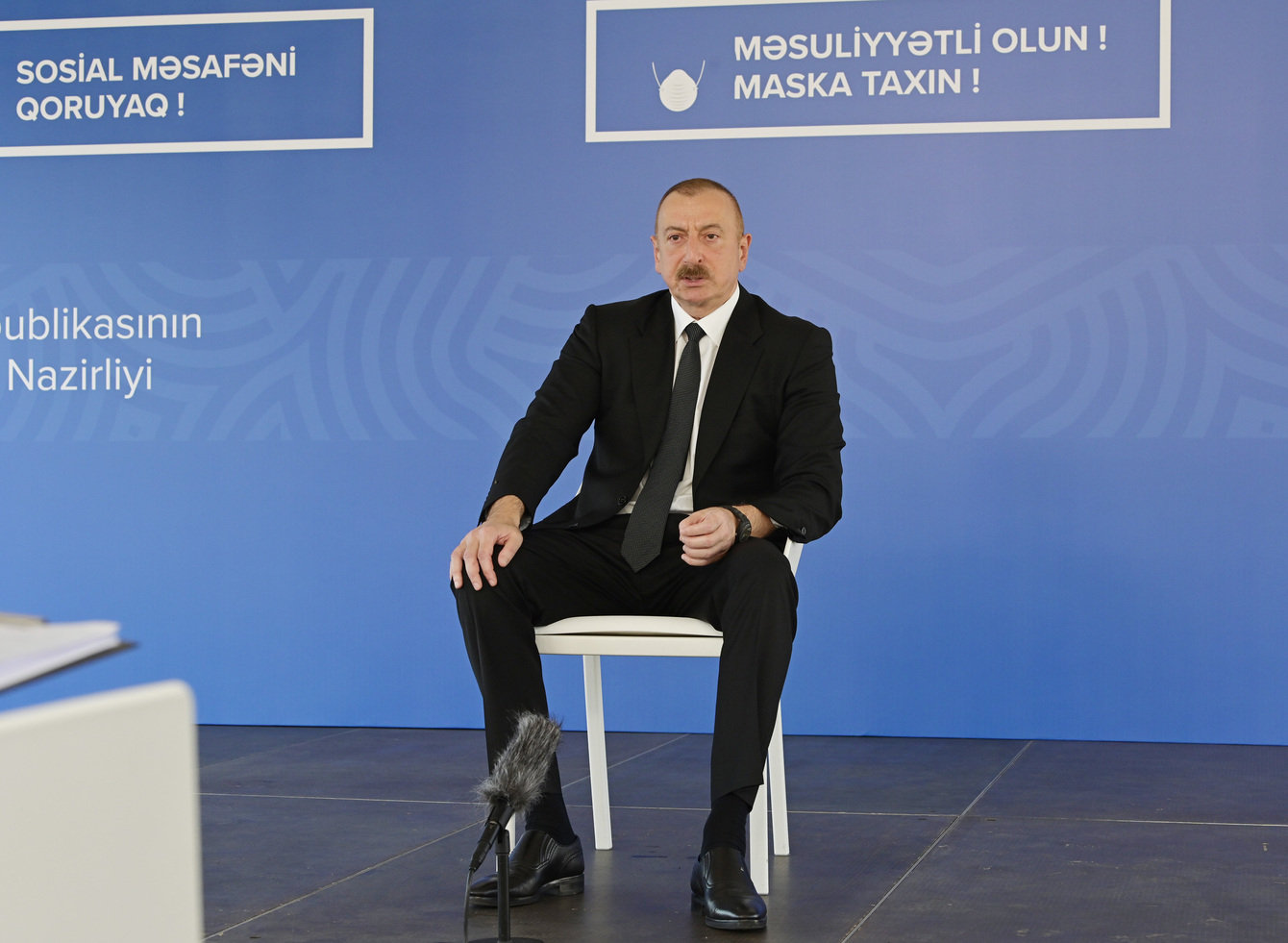 President Ilham Aliyev gave an interview to local media after attending the opening of a new modular hospital complex in the capital Baku, July 6, 2020 / President.Az

In a recent interview, President Ilham Aliyev of Azerbaijan gave a broad insight into the settlement process of the Armenia-Azerbaijan Nagorno-Karabakh conflict and accused the OSCE Minsk Group for its inaction on Armenia's illegal occupation of Azerbaijani lands.

President Aliyev said Azerbaijan's position is fair and any change in its position is not and will not be subjected to discussion.

“Because our position is the position of justice. Our position is based on both historical justice and international law,” he said in an interview with local media on Monday, according to President.Az. “Therefore, there can be no changes in our position, the conflict must be resolved within the territorial integrity of our country. The establishment of a second Armenian state on Azerbaijani lands will never be allowed. All occupied lands must be liberated from the occupiers, and Azerbaijani citizens must return to the lands of their ancestors. This is a principled position, and the world community supports this position.”

The Azerbaijani president went on to highlight two contradictory statements voiced by the Armenian leadership in violation to the international law and the main point of the decades-long political talks – the statement about Nagorno-Karabakh’s belonging to Armenia and the proposals for changing the format of talks. He said despite such conflicting assertions by Armenian authorities, the OSCE Minsk Group did not react adequately.

“The prime minister of Armenia says, “Karabakh is Armenia”. I answer this, and answer properly. But why doesn’t the Minsk group respond to this? Why doesn’t it answer that this expression violates the essence of the negotiations formed by the Minsk Group and actually makes them meaningless. Did the Minsk Group co-chairs respond adequately to this? They did not!” President Aliyev said.

“For two years now, the Armenian side has been trying to change the format of negotiations, stating that Azerbaijan should negotiate with self-styled and fictitious “leaders” of the so-called Nagorno-Karabakh. Is there an adequate answer to this? There is not!” he added.

The Nagorno-Karabakh conflict emerged in South Caucasus in the early 1990s. Following a rise in anti-Azerbaijan rhetoric, Armenia launched a full-blown military campaign against its eastern neighbor in 1991. Azerbaijan’s internationally acknowledged Nagorno-Karabakh region and seven surrounding districts fell under Armenia’s occupation in the wake of the war that stopped in a ceasefire in 1994. Armed forces of Armenia killed over 30,000 ethnic Azerbaijanis, including 613 that was massacred in the city of Khojaly, and displaced one million throughout the four-year bloody war.

The United Nations adopted four resolutions at the height of the war in 1993 demanding immediate and unconditional withdrawal of Armenia’s forces from the occupied lands. However, Armenia has been passing over the fulfillment of the documents to date, which hinders the resolution of the conflict paving the way for regular, sometimes full-fledged skirmishes.

The Minsk Group of the Organization for Security and Cooperation in Europe (OSCE) has been conducting a mediation role for the conflict since 1994. Diplomats from the US, France, and Russia have been serving as the co-chairs of the group to spearhead international efforts for finding a durable solution to one of the most dangerous regional conflicts. Despite the decades-long shuttle diplomacy conducted by the group co-chairs, the resolution process did not gain a significant pace.

President Aliyev said Azerbaijan expects concrete statements from the OSCE Minsk Group that would serve as a response to the contradictory addresses by the authorities of Armenia.

“The fictitious president of the bogus Nagorno-Karabakh republic who was not elected as a result of fictitious elections holds an inauguration ceremony in Shusha. Is there an adequate answer to this or not?!” he said in the recent interview. “After all, this is an open provocation. Why is there no adequate reaction to this? Why isn’t it stated that this is a provocation for which Armenia will be held responsible? I am the one talking about this, but it should be them [OSCE Minsk Group] doing that if they want the issue to be resolved peacefully."

The OSCE Minsk Group co-chairs issued the most recent statement on June 30 following their separate online meetings with the foreign ministers of Armenia and Azerbaijan, and the joint online conference with the ministers. They voiced the traditional “no military settlement” address in the statement and called on the sides to beef up the ceasefire and prepare the population for peace.

The separatist regime in Azerbaijan’s Nagorno-Karabakh region held illegal “presidential elections” in March and April. The inauguration of the newly “elected” so-called bogus “president” took place in May, which was participated in person by Armenia’s Prime Minister Nikol Pashinyan. Despite these illegal activities in the internationally recognized territories of Azerbaijan, the OSCE Minsk Group did not hold Yerevan accountable for violating its obligation taken as part of the negotiation process. It has just condemned the fake “elections” in a regular statement published to the group’s website.

“There are almost no negotiations now. The video conferences of the foreign ministers of Armenia and Azerbaijan have no meaning whatsoever. This simply shows that the Minsk Group is doing something. But how much longer can this last?” President Aliyev said. “They have now come up with the expression of “substantive negotiations”. They came up with this expression themselves, its essence is clear – yes, without changing the format of the negotiations and without supplementing the subject of negotiations on the table. In this case, of course, we will participate in the negotiations. Otherwise, there is no need for meaningless negotiations.”