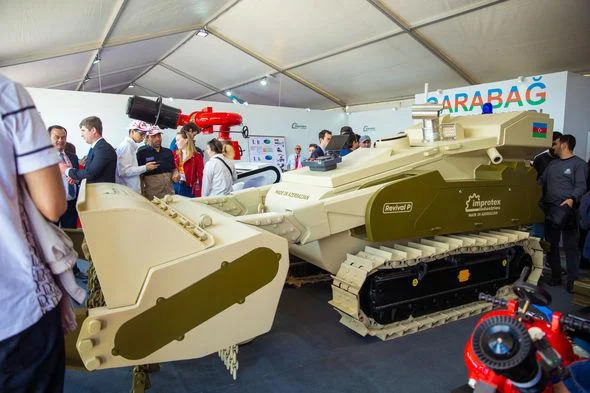 The self-propelled “Revival-P1” anti-personnel mine action machine was manufactured by the Azerbaijan-based Improtex Industries Company, based on the chassis of the Turkiye-made MEMATT minesweepers. / Oxu.Az

Azerbaijani manufacturers introduced the first ever domestically produced minesweeper at the ongoing TEKNOFEST Azerbaijan Aerospace and Technologies Festival in the country’s capital Baku.

The self-propelled “Revival-P1” anti-personnel mine action machine was manufactured by the Azerbaijan-based Improtex Industries Company, based the chassis of the Turkiye-made MEMATT minesweepers. The device was equipped with 100 percent locally produced body, front flyer, electrical, electronic, and mechanical parts.

“The remote control of “Revival-P1” greatly simplifies the work of the sappers, allowing the device to prevent humans from performing tasks that would endanger their life. The device can also be equipped with a number of functions, such as mine detection, self-defense systems, as well as the evacuation of the wounded from the danger zone,” officials at Improtex Industries told journalists during the minesweeper’s presentation at the TEKNOFEST Azerbaijan on Thursday.

According to its technical specifications, “Revival-P1” can perform mine cleaning operations in the temperature ranging from 0 °C to 55 °C. Advantages of the device include a bigger front flyer than its competitors, a larger radiator that prolongs its lifetime, a larger fuel tank, easy access to almost all spare parts in case of urgent maintenance, explosion-proof 360° PTZ camera capable of 80x zooming, and durable and high temperature resistant TUF metal that was used in its construction.

The Azerbaijan National Agency for Mine Action (ANAMA) has already tested Revival-P1 and gave the OK to its involvement in the mine action in the liberated territories.

Azerbaijan’s lands have been mined heavily during their nearly 30-year-long occupation by Armenia since the early 1990s. Armenia kicked off full-blown military aggression against Azerbaijan following the Soviet Union’s dissolution in 1991. The bloody war until a ceasefire in 1994 saw Armenia occupying 20 percent of Azerbaijan’s internationally recognized territories. Over 30,000 Azerbaijanis were killed, and one million were expelled from those lands in a brutal ethnic cleansing policy conducted by Armenia.

As part of 44-day counter-attack operations that took place in 2020, Azerbaijani forces managed to liberate over 300 occupied settlements, including the cities of Jabrayil, Fuzuli, Zangilan, Gubadli, and Shusha. The war ended in a tripartite statement signed by Armenia, Azerbaijan, and Russia on November 10, 2020. Armenia also returned the occupied Aghdam, Kalbajar, and Lachin districts to Azerbaijan as part of the agreement.

Shortly after the war, Azerbaijani authorities rolled out full-scale mine clearance operations in the Karabakh region.

ANAMA deployed seven Turkish MEMATT, three Slovak-made Bozena-4 and two Bozena-5 minesweepers, one Croatian-made MV-4 special-purpose mine-clearing machine, and one AARDVARK mine clearance vehicle of the British production for mine clearance. Revival-P1 is expected to join the mine action soon.

Meanwhile, demining operations have faced many challenges due to Armenia’s refusal to hand over the maps of the areas where the landmines are located.

Officials at the Azerbaijan National Agency for Mine Action (ANAMA) say the neutralization of unexploded ammunition, warheads, and missiles in the combat zones could take 5-6 years, while it is about 10-13 years for the mined areas.

More than 200 Azerbaijanis have been killed or injured by Armenian landmines since the 10 November 2020 statement. In June 2021, two journalists and a government official lost their lives in a mine blast in the Kalbajar district.