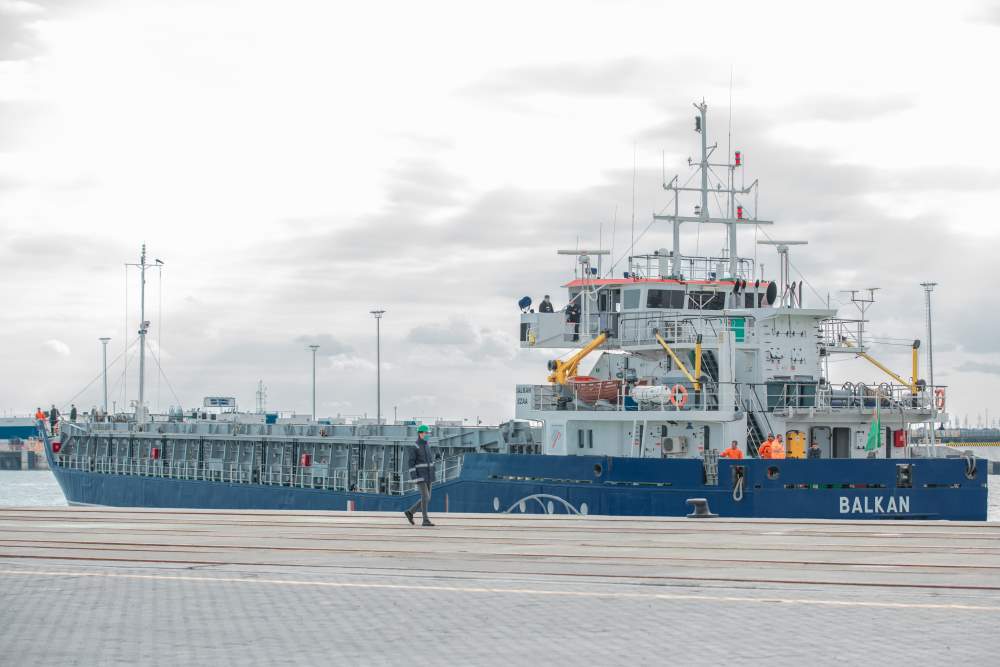 Azerbaijan's national railway operator, Azerbaijan Railways, began operating its new feeder ship on Monday as part of efforts to minimize the impact of the coronavirus pandemic on trans-logistics services between Turkey and Central Asia.

The feeder vessel, dubbed Balkan, connects the Baku International Sea Trade Port, known also as Port of Baku, to Turkmenistan’s International Seaport of Turkmenbashi. The connection is established under a cooperation agreement signed between the governments of Azerbaijan and Turkmenistan.

The 120 twenty-foot equivalent unit (TEU) container ship will reportedly be operated by ADY Container, a subsidiary of Azerbaijan Railways, and carry goods coming from Turkey. Feeder ships are medium-sized freight ships used to pick up containers from smaller ports and deliver to larger vessels for their main voyage.

“The Balkan ship, designed for cargo transportation through Turkmenistan, Kyrgyzstan, Uzbekistan, and Afghanistan, operates once a week. If the volume of cargo increases, the ship will be used twice a week,” ADY Director Natig Jafarov said in a statement issued by Azerbaijan Railways.

As part of the first stage of Balkan’s voyage, cargo supplied from Turkey in trucks was converted into containers and loaded onto the feeder on April 13. The ship is expected to deliver a total of 62 containers, including 20, 40 and 45-feet freight containers to the port of Turkmenbashi.

At the next stage, trains from Istanbul and the port of Mersin on the Mediterranean coast will be brought to the Baku Port, loaded on Balkan and other ships, and then transported to Central Asia.

The Baku-Tbilisi-Kars (BTK) railway serves as the backbone railway connection between Turkey and Azerbaijan. The 846 kilometer-long (526 miles) railroad, which came online in October 2017, stretches from Baku to the Georgian capital of Tbilisi before heading to its final destination in the northeastern Turkish city of Kars.

In addition to connecting three host countries by joining the Turkish railway grid, the railroad facilitates cargo deliveries to 60 countries in Asia, Europe and North Africa. Central Asian countries reach European markets in a shorter, faster, and safer way via the BTK as it allows transporting cargo from one end of Eurasia to another in just 15 days, which is twice as fast as sea transportation and half the cost of air deliveries.

As of October 2019, BTK carried 275,000 tons of goods. The figures will reach 3-5 million tons in 2020, 6-8 million tons expected in 2022, and 17 million tons when the railroad is fully operating. During the first nine months of 2019, some 24,305 containers were transported between Europe and China through the Baku International Sea Trade Port, including 2,160 units received from China.

The cargo shipment from Turkmenistan, Kazakhstan, and Uzbekistan to Turkey via Azerbaijan reached 144,800 tons in 2018, according to the Trade Ministry of Turkey. Turkmenistan, where the Balkan feeder ship carries goods from the Port of Baku, has sent 97,200 tons of goods to Turkey in the same year.

However, the global trade crisis triggered by the spread of coronavirus pandemic in the early part of 2020 have negatively impacted logistics operations in the region. Turkey's President Recep Tayyip Erdogan suggested extending the BTK to Central Asia in an effort to revive transcontinental trade.

“We can extend the railway line between Turkey, Azerbaijan, and Georgia, which is used for cargo transportation, to Central Asia. We are working to transport 3,500 tons of cargo per day in addition to the existing cargo via the Baku-Tbilisi-Kars railway,” President Erdogan said in the emergency video summit of the Turkic Council, according to President.az. “Due to the closed land routes, Azerbaijan and Kazakhstan have become an important transit route for Turkish transporters."

Meanwhile, ADY Container Director Natig Jafarov said although the new feeder ship service aims to alleviate the negative impact of COVID-19 on the cargo sector, Azerbaijan could also help facilitate cargo transportation between Turkey and Central Asia even during the post-coronavirus period given the level of containerization.