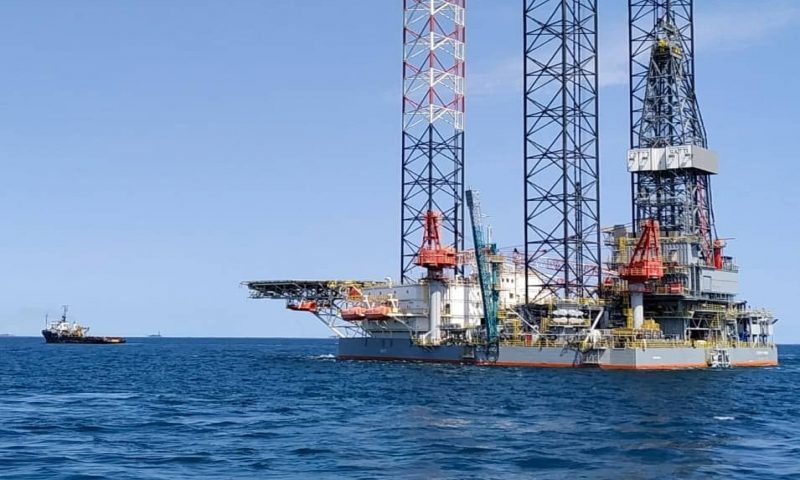 Kazakhstan’s first drilling rig called Satti, built entirely in Kazakhstan, will be used for digging in Azerbaijan’s portion of the sea, while the State Oil Company of Azerbaijan, better known as SOCAR, and British oil and gas giant BP are conducting joint exploration work.

State-owned energy companies from Azerbaijan and Kazakhstan will conduct joint off-shore oil drilling after reaching an agreement on the matter earlier this week.

Kazakhstan’s first drilling rig called Satti, built entirely in Kazakhstan, will be used for digging in Azerbaijan’s portion of the sea, while the State Oil Company of Azerbaijan, better known as SOCAR, and British oil and gas giant BP are conducting joint exploration work.

Launched in 2015, the KMG-owned oil rig was built with American technology in two shipyards over a period of three years. The rig is a type of mobile platform that consists of a buoyant hull fitted with movable legs, capable of raising the hull over the surface of the sea and designed for drilling in the Caspian Sea at a depth of 80 meters. Weighing more than 10,000 tons, the rig is supplied with a helipad and residential modules that enable up to 86 personnel to live and work comfortably and safely.

The Satti floating drilling unit was delivered to Baku in June 2019 under a memorandum of understanding (MoU) signed by SOCAR President Rovnag Abdullayev and Alik Aydarbayev, chairman of the Management Board of the KazMunayGas. The MoU provides for the upgrade of the Satti rig in Baku and its utilization in SOCAR`s projects in the Azerbaijani sector of the Caspian Sea. The memorandum also identifies opportunities for cooperation between the two companies, including exploration in the Caspian Sea, a joint study of geological and geophysical data to explore for hydrocarbons, as well as the cooperation in logistics and trading of oil and oil products.

Azerbaijan already utilizes a few semi-submersible rigs of its own, named Istiglal, Dede Gorgud, and Heydar Aliyev, the latter being named after the country’s former president. Rigs used in the Caspian Sea by SOCAR-AQS, the joint venture between SOCAR and Nobel Oil Services, include the EEC/JC70D, Drillmec HH300 and Drillmec 3000hp, made by the United States; the Chinese-made Hong Hua/ZJ70D; and the Bentec 3000hp procured from Germany. These units can handle water depths between 500 to 900 meters at deepwater drilling projects such as Umid, Guneshli, West Absheron and Bulla.

BP’s work with Azerbaijan date back to the early 1990s, when BP opened a representative office in Baku. Over nearly the past three decades, BP has been partnering with Azerbaijan within world-class projects such as Azeri-Chirag-Gunashli (ACG), Shah Deniz, Baku-Tbilisi-Ceyhan (BTC), and Southern Gas Corridor (SGC).

The two companies now jointly explore and develop Block D230 in the North Absheron basin of the Azerbaijani sector of the Caspian Sea. Under the 25-year-long contract signed between the two companies, BP is allowed to assume operation of the exploration of Block D230 – an unexplored deposit that sits on an area of roughly 3,200 square kilometers (1,236 square miles).