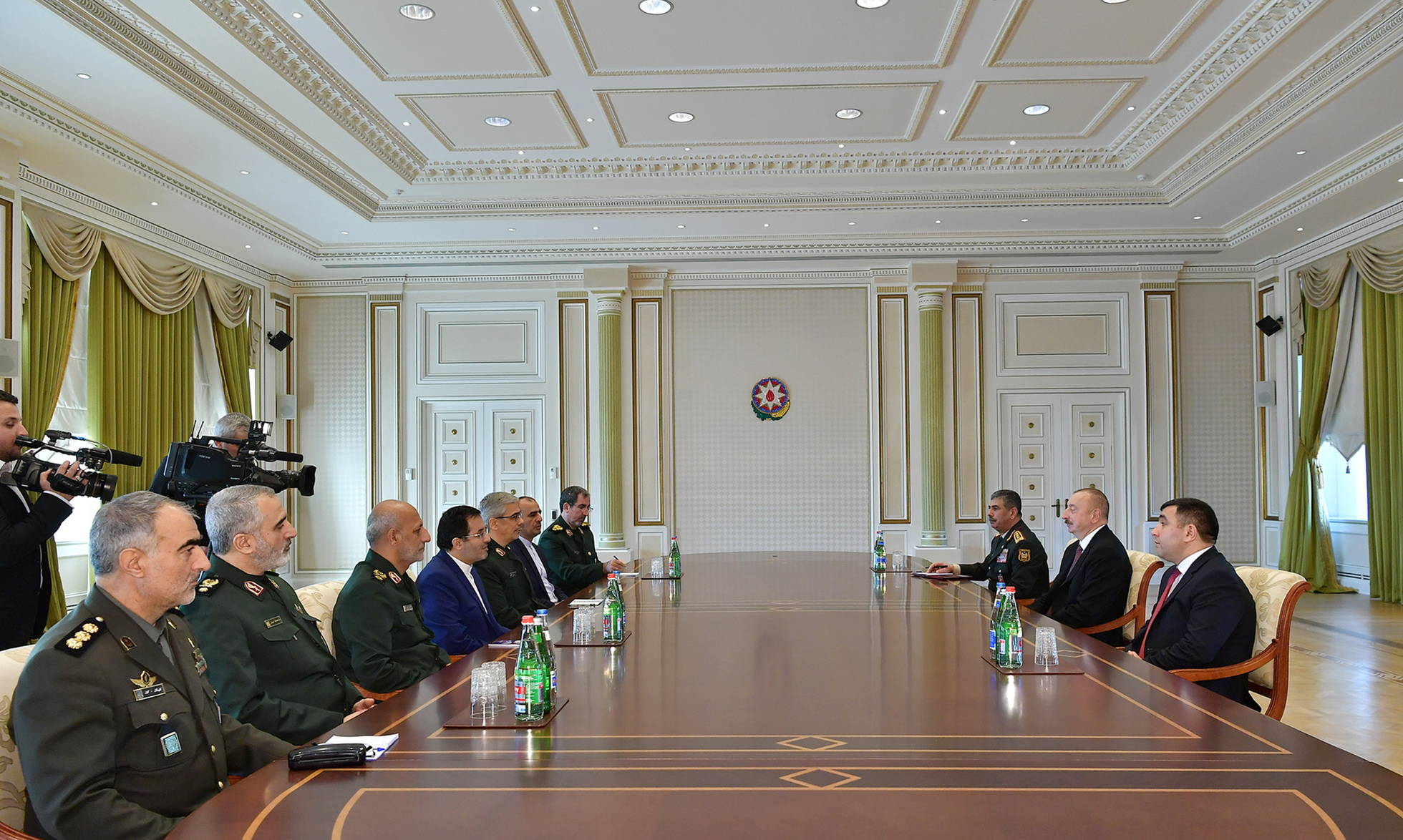 Senior defense officials from Azerbaijan and Iran have signed a new memorandum of understanding (MoU) that aims to boost bilateral defense and military relations. The MoU was signed between the Iranian Chief of Staff of the Armed Forces, Major General Mohammad Bagheri, during his visit to Baku, and Azerbaijan’s Defense Minister, Zakir Hasanov, on January 16.

Azerbaijan’s President Ilham Aliyev received the Iranian delegation, led by Bagheri, and said during their meeting that Azerbaijan-Iran bilateral relations have been developing successfully in all fields over the past years, including in the military area, according to the president’s official website.

President Aliyev said that bilateral ties between the two Caspian neighbors have reached a high level, noting that more than 10 meetings at the presidential level in recent years have played a special role in strengthening ties.

“Iran considers the Karabakh lands as Azerbaijani lands, supports and will continue to support the territorial integrity of Azerbaijan. It is unacceptable to change the borders by force, Iran always stands by Azerbaijan on this issue,” the Iranian general said.

The Nagorno-Karabakh region, which is an internationally recognized part of Azerbaijan, has been occupied by Armenia since the early 1990s. In the late 1980s, when Azerbaijan and Armenia were part of the Soviet Union and the empire was in its twilight, Armenian nationalists began citing claims to Azerbaijan's Nagorno-Karabakh region that had been partially populated with ethnic Armenians alongside indigenous Azerbaijanis.

Once the USSR officially dissolved in December 1991, Armenia kicked off a military campaign against Azerbaijan that led to it occupying the Nagorno-Karabakh region along with seven surrounding districts, altogether comprising roughly 20 percent of Azerbaijan’s internationally recognized territory.

Three UN Security Council Resolutions (numbers 853, 874 and 884) and United Nations General Assembly resolutions 49/13 and 57/298 refer to Karabakh as being part of Azerbaijan. The Parliamentary Assembly of the Council of Europe also refers to the region as being occupied by Armenian forces. To this day, none of the resolutions calling on Armenia to withdraw its troops have been fulfilled.

Iran and Azerbaijan have accelerated efforts in recent years to forge closer relations in various areas. In 2016, 11 MoUs and agreements were inked to promote mutual cooperation in various fields.

Meanwhile, Muslim-majority Azerbaijan is considered a key partner of Washington, which has sour relations with Tehran, especially after U.S. President Donald Trump pulled the United States out from the Joint Comprehensive Plan of Action in May 2018. Also known as the nuclear deal, the plan provided Iran sanctions relief in exchange for Iran curbing its nuclear program. The deal was brokered under the Obama administration, and Trump ran his presidential campaign in part on a promise to withdraw from what conservatives in the U.S. saw as a bad deal.

American officials found an ally in Azerbaijan following the September 11th attacks in 2001. Officials in Baku announced their firm support to the U.S.-led campaign against terrorism, opening Azerbaijan’s airspace to American planes entering and exiting Afghanistan, and later Iraq. The Northern Distribution Network, a vital air and land transportation corridor that provides access into and out of Afghanistan and includes Azerbaijan, allowed for approximately 40 percent of cargo reaching NATO forces in Afghanistan to pass.

Today, Azerbaijan contributes to NATO’s Resolute Support mission in Afghanistan through the stationing of 120 servicemen. Azerbaijan is the only non-NATO Muslim-majority country, and the only country from the Caspian region, that provides ground support to NATO-led operations in Afghanistan.