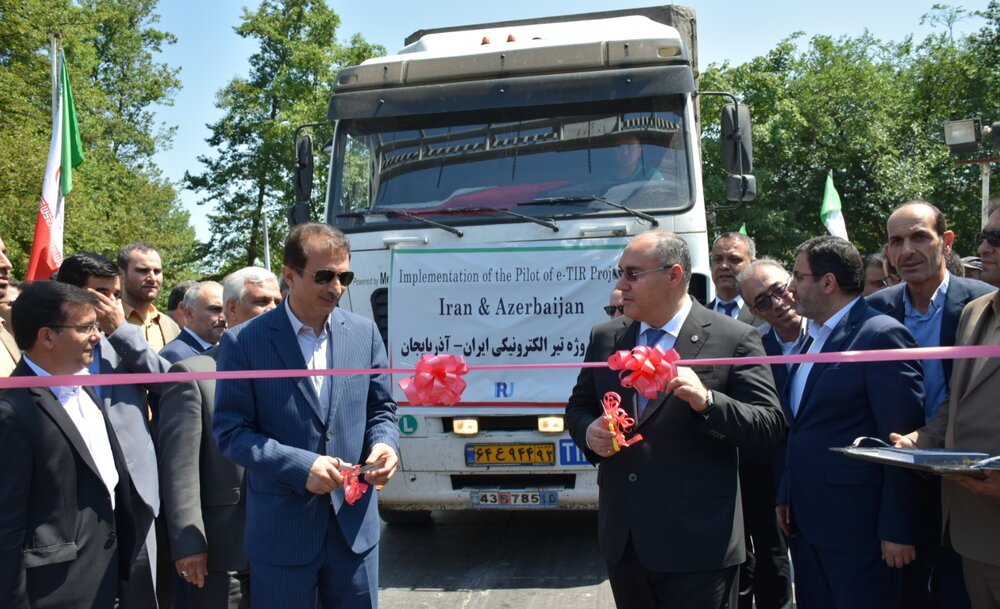 The pilot of the e-TIR project between Iran and Azerbaijan was officially launched at Astara border crossing on June 18, 2019, in a ceremony attended by visiting Chairman of State Customs Committee of Azerbaijan Safar Mehdiyev and the Head of Iran's Customs Administration Mehdi Mirashrafi. / Mehdi Hoseynnejad / MEHR News Agency

Azerbaijan and Iran are launching a new transportation-related infrastructure project known as “e-TIR,” which envisages the full electronization of transit operations between Azerbaijan and Iran at the Astara border crossing between the two Caspian region neighbors.

“The advantages of this online project are competitive and mechanized exchange of goods, accelerated transportation, reduction of violations and the elimination of administrative bureaucracy, and this glory has reached governments of Iran and Azerbaijan,” Mirashrafi said, according to the Iranian state-run IRIB news agency.

Mirashrafi said the same project will be implemented between Iran and Afghanistan, India, Russia and Georgia in the near future.

Seventy-six countries are members of the TIR Convention, which was established in 1959 and provides for an internationally recognized procedure to facilitate cross-border transportation of goods. The convention is administered by the United Nations Economic Commission for Europe (UNECE)

The e-TIR system allows two countries to access information at any time, and view cargo information before delivery, helping to eliminate the risk of deception and accelerate customs formalities, as well as reduces costs.

Azerbaijan and Iran signed documents concerning basic principles for the use of an e-government-type system for the international transportation of goods, in October 2018 and January 2019. The basic principles paved the way for the creation of legislation that will lead to the e-TIR Pilot project, set a time frame for its launch, and conducting training for customs officers on the use of the electronic system.