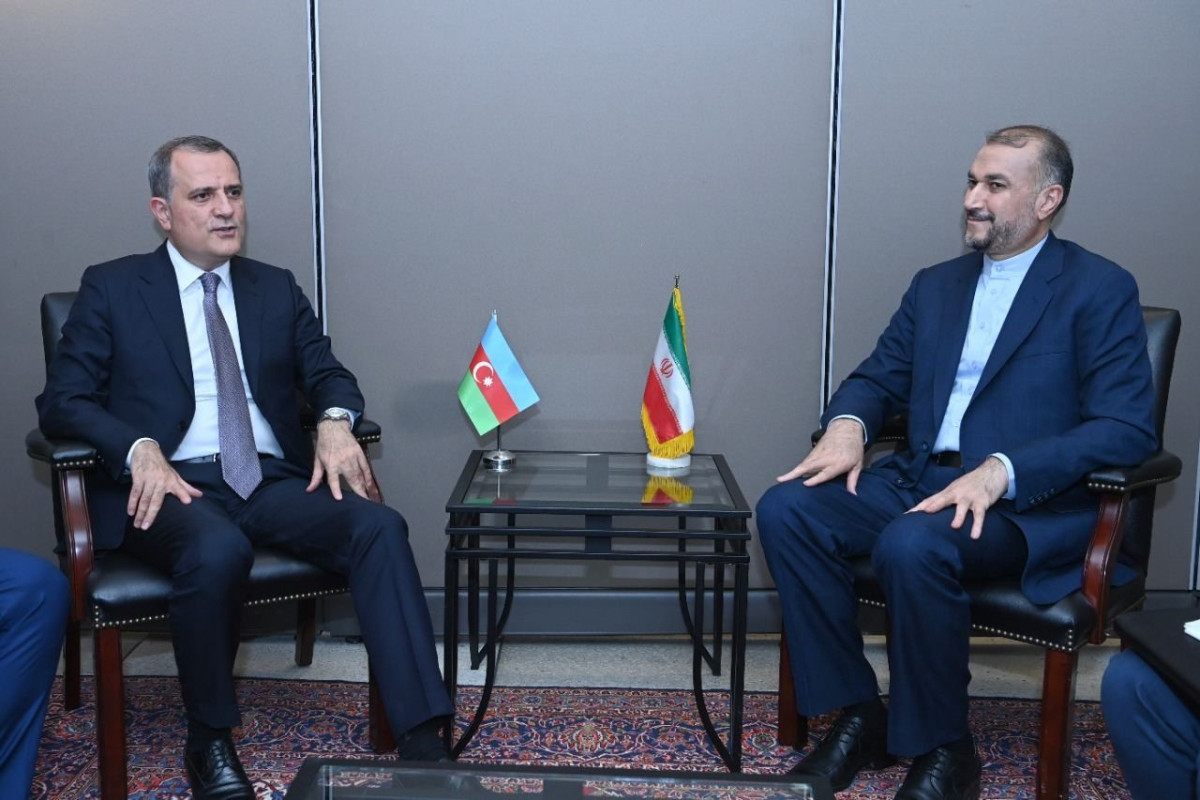 Azerbaijan's Minister of Foreign Affairs Jeyhun Bayramov and his Iranian counterpart, Hossein Amir-Abdollahian, held a meeting within the framework of the high-level week of the 77th session of the UN General Assembly in New York, on September 23, 2022. / APA

The Azerbaijani and Iranian foreign ministers have called for resolving issues between the two countries through diplomatic channels.

In a phone conversation with Azerbaijan’s Foreign Minister Jeyhun Bayramov, Hossein Amir-Abdollahian expressed dissatisfaction with some statements made in recent days. According to him, official and diplomatic channels are the best way to resolve misunderstandings and disagreements, and media coverage of such issues will not only fail to help resolve them, but also pave the way for enemies to exploit them.

Amir-Abdollahian further noted that Tehran was trying to expand ties with regional countries, including with Azerbaijan, and invited his Azerbaijani counterpart to participate in a “3+3” summit in Tehran. The summit will bring together delegations from Azerbaijan, Armenia, Iran, Russia, and Türkiye.

In his turn, Azerbaijan’s Foreign Minister Jeyhun Bayramov pointed to a recent meeting between the presidents of the two countries in Astana, describing the talks and contacts between officials as positive. Minister Bayramov expressed Azerbaijan's readiness to strengthen relations and resolve misunderstandings.

The two ministers stressed that it was necessary to resolve the recent situation in relations between the two countries, concerns over public rhetoric, and other existing problems within the framework of dialogue and mutual understanding. They also pointed out that it would be useful to establish contacts between the press secretaries of the foreign ministries.

These statements came amid a recent surge in tensions between the two countries. The situation worsened following large-scale military drills staged by Iran in the country’s northwestern areas along the Araz River on the border with Azerbaijan.

In addition, the Zangazur corridor project, a multi-modal route to connect Azerbaijan's mainland with its exclave of Nakhchivan and go further to Türkiye via the territory of Armenia, has sparked anxiety among officials in Tehran. Iran's President Ebrahim Raisi said that Iran will never accept any geopolitical change in the Caucasus region.

In October 2022, Iran’s foreign minister officially inaugurated the country’s consulate in Gafan, located in Armenia's southernmost province along the border with Azerbaijan. The minister has said, “Iran considers Armenia’s security to be the security of its own and the region” and voiced Tehran’s consent to host an Armenian consulate general in northwestern Tabriz city, the capital of Iran’s East Azerbaijan province populated by ethnic Azerbaijanis.

During the meeting, the Iranian side was informed about the displeasure and concern with the recent anti-Azerbaijan propaganda, the smear campaign, as well as the threatening rhetoric of Iran’s high-ranking political and military leadership, which is not in line with the spirit of the two nations' ties. It was also highlighted that spreading false information and engaging in activities hostile to Azerbaijan in Iran is unacceptable and must stop as soon as possible.

Iranian Foreign Ministry Spokesman Nasser Kanani said on November 14 that "Iran's policy is based on expanding relations with neighbors, and Azerbaijan is no exception," and added that “so no one should interpret Iran's silence and patience as Iran's weakness."

On November 17, the Assistant to the President of Azerbaijan who is also the Head of the Foreign Policy Affairs Department of the Presidential Administration, Hikmet Hajiyev and the Ambassador of Iran Seyyed Abbas Musavi discussed relations between the two countries and prospects for regional cooperation.