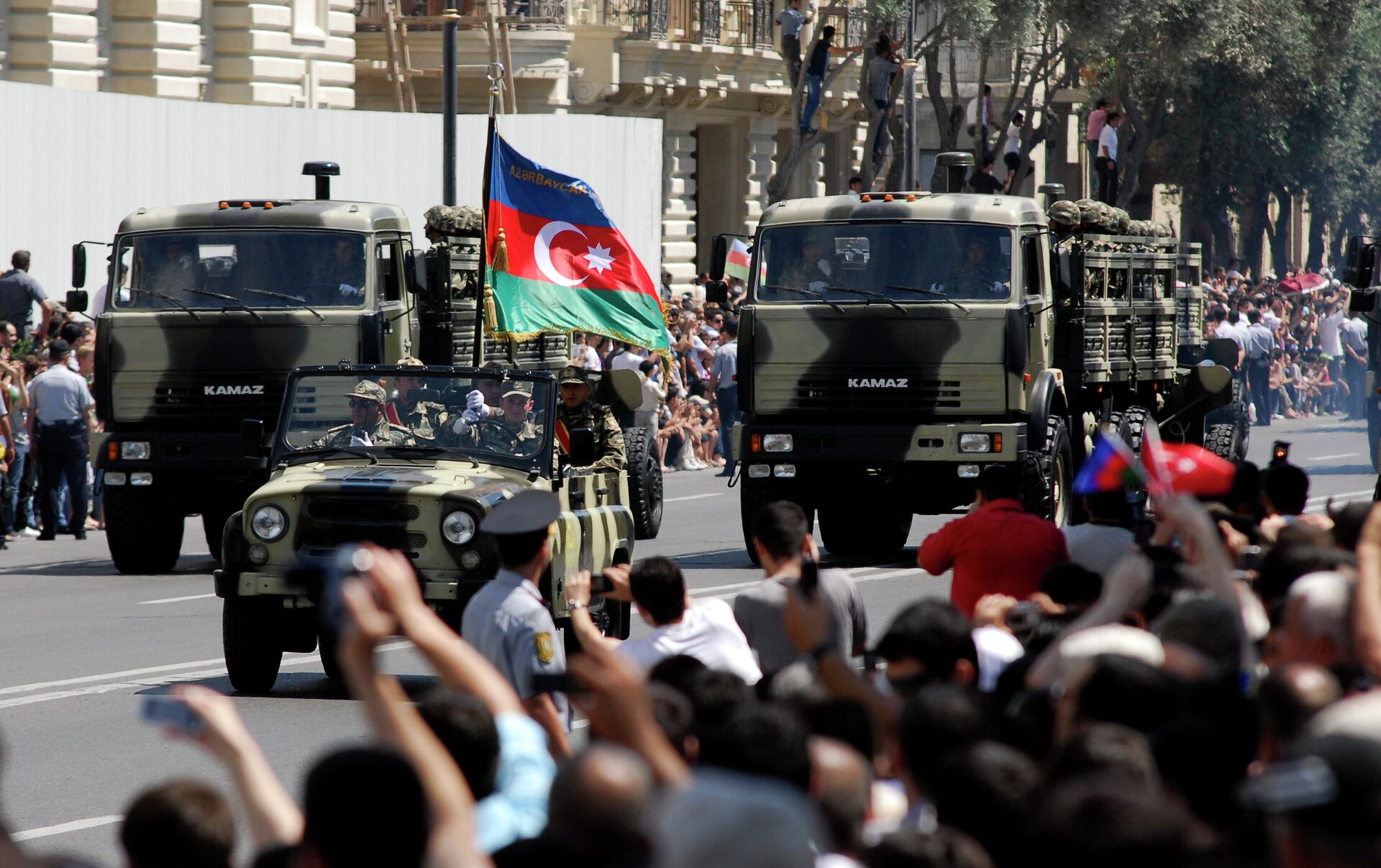 A photo from a military parade in Baku, Azerbaijan / Osman Karimov / Sputnik Kazakhstan

The government of Azerbaijan is set to increase the country’s defense and national security budget in 2023.

A total of 5.3 billion Azerbaijani manats or $3.1 billion is expected to go for strengthening the defense capabilities and national security of Azerbaijan. The increase in funds is reflected in the draft law "On the State Budget of the Republic of Azerbaijan for 2023," according to local media reports.

Azerbaijan budgeted nearly 4.5 billion manats or $2.64 billion to strengthen defense and national security both in 2022 and 2021.

Given the constant threats from neighboring Armenia, Azerbaijan’s military spending was on the rise, in particular, after a bloody 44-day war in 2020. The post-war uneasiness on the border with Armenia and the illegal presence of Armenian detachments in the territories of Azerbaijan temporarily monitored by Russian peacekeepers have been pushing Baku to retain and strengthen the combat capability of the national army.

Armenia and Azerbaijan had been locked in an armed conflict since the early 1990s when Armenia launched a military offensive against Azerbaijan. The bloody war ended with a ceasefire in 1994, which saw Armenia forcibly occupying 20 percent of Azerbaijan’s internationally recognized territories. On September 27, 2020, the decades-old conflict between the two countries spiraled after Armenia’s forces deployed in the occupied Azerbaijani lands shelled military positions and civilian settlements of Azerbaijan. The attacks triggered the Azerbaijani forces to take immediate counter-offensive measures to push back the assault. The war ended with a decisive victory of the Azerbaijani army, which liberated more than 300 settlements, including the cities of Jabrayil, Fuzuli, Zangilan, Gubadli, and Shusha, from nearly 30-year-long illegal Armenian occupation. The war ended in a tripartite statement signed on November 10, 2020, by Armenia, Azerbaijan, and Russia. Under the statement, Armenia also returned the occupied Aghdam, Kalbajar, and Lachin districts to Azerbaijan.

During and after the war, President Aliyev revealed Azerbaijan’s intention to strengthen the national army based on the Turkish model but on a smaller scale. Following the war, as part of the army’s upgrade in line with the Turkish military expertise, all-new Commando units were created in areas with difficult terrain.

In 2021 and 2022, President Aliyev inaugurated new units of Commando forces, the personnel of which has been through weeks-long “Commando preparation” courses in Türkiye under the direct involvement and guidance of Turkish military specialists.

Defense Minister of Azerbaijan, Colonel-General Zakir Hasanov said the post-war army-building process targeted mainly upgrading the organizational and staff structure, as well as the weapons arsenal of the national army.

“Basically, the management system has been changed. The applied innovations were very successful and this was demonstrated in the last battles. New Commando military units will be established. Several such military units have already been created,” he told journalists at the “Saha Expo” Defense and Aerospace Exhibition in Türkiye on Tuesday.

Hasanov added that the Azerbaijani army was also interested in a number of military equipment exhibited at the “Saha Expo”, and had already contracted the purchase of many of them.

In the meantime, Azerbaijan is likely to reach a preliminary agreement with the Turkish HAVELSAN defense company for the purchase of the BARKAN unmanned ground combat vehicle, according to the Report news agency. HAVELSAN project manager Veysel Ataoglu said BARKAN will be handed over to the Azerbaijan Armed Forces in the near future.

The BARKAN unmanned vehicle is capable of carrying or towing loads, providing close protection, armed reconnaissance, and detonating mines and unexploded ordnance. The first sample of BARKAN was rolled out in March-April 2022 before its successful test launch by the Turkish Armed Forces.