Azerbaijan in Talks to Buy Next-Generation Military Aircraft From Russia 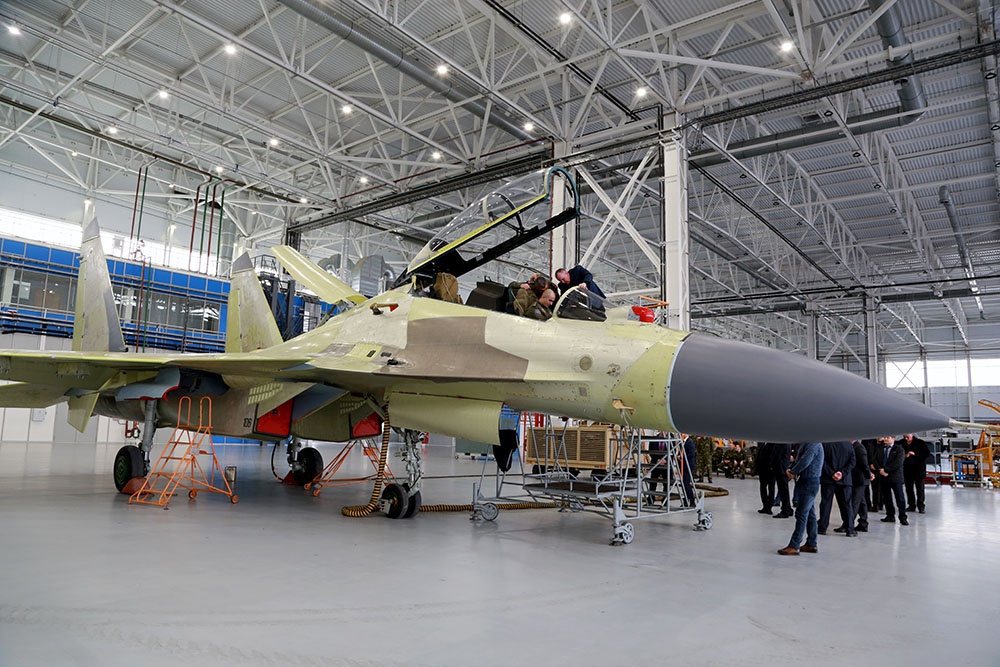 A delegation joined by specialists from the Air Force of Azerbaijan earlier this week visited military plants in Russia and expressed Baku's interest in purchasing next-generation fighter jets.

The Defense Ministry of Azerbaijan reported on April 7 that the Azerbaijani delegation toured factories where the Su-35 and MiG-35 combat aircraft are manufactured. During the visit, delegates were briefed about the tactical and technical characteristics, combat capabilities, armament as well as the production, operation, and maintenance of both fight jets, which are the most modern aircraft of their kind.

The delegation met with representatives from Rosoboronexport, a leading provider of military products, technologies and services, and revealed Baku's interest in acquiring advanced Russian-made combat aircraft. The Russian side, in turn, expressed its readiness to supply the aircraft to Azerbaijan in any quantity required by the country’s air force. Following their discussions, Azerbaijani military pilots performed test flights on the MiG-35 aircraft.

"Azerbaijan is a long-standing partner of the Russian Federation in the field of military-technical cooperation, which is developing steadily and systematically between our countries. In this regard, we are ready for further discussion with partners of a wide range of areas of cooperation, including on aviation topics," the official representative of the Federal Service of Military-Technical Cooperation of Russia, Maria Vorobyova was quoted by Russian news agency Interfax as saying.

The defense cooperation between Azerbaijan and Russia goes back to as early as the Soviet years when the two countries formed part of the USSR. However, after the dissolution of the Soviet Union in 1991, Moscow suspended deliveries of arms to Azerbaijan before resuming them in 2005.

Russia is Azerbaijan's second-largest defense partner, supplying 31 percent of the country’s overall arms imports between 2015 and 2019, according to 2020 data compiled by the Stockholm International Peace Research Institute (SIPRI). A total of 60 percent or the largest portion of Azerbaijan’s arms imports came from Israel during the same period.

Azerbaijan has purchased a wide variety of armament from Russia, the world’s second strongest military power over the years, including helicopters, tanks, armored personnel vehicles, air defense systems, missiles for different purposes, machine guns, pistols, and others. The Air Force of Azerbaijan currently has MiG-21, MiG-25, MiG-29 fighter jets in its fleet, in addition to the Su-17 fighter-bomber, Su-24, and Su-25 attack aircraft and the An-24 and An-12 military transport aircraft, among other Russian-made military jets.

The purchase of Su-35 and MiG-35 jets would essentially modernize the Air Force of Azerbaijan's fleet by bringing the most advanced airpower technology to the national military aviation.

Andrei Frolov, editor-in-chief of Arms Export magazine, a fleet expert at the Center for Analysis of Strategies and Technologies of Russia, says Russia’s export of new generation aviation equipment to Azerbaijan should not be excluded.

“The delivery of the SU-35, SU-30SM, and MIG-35 to Azerbaijan cannot be ruled out,” Frolov told Vzgylad.az in an interview. “It all depends on what financial opportunities and real needs Azerbaijan has. I would not rule out such an opportunity.”

The advantages of Su-35 and MiG-35 are multi-functional and highly maneuverable combat aircraft belonging to the 4++ generation. The flight range of the Su-35 is as far as 4,500 kilometers, while the MiG-35 can fly at a maximum of 3,500 kilometers. Both aircraft are equipped with new radar technology using target detection and digital defense systems of electronic equipment, which are compatible with all modern types of aircraft weapons.

The Su-35 utilizes the latest technology and supersonic R-37M air-to-air missiles, which exceed the speed of sound and can destroy targets at a distance of up to 300 kilometers. These missiles are designed to destruct air, ground, and surface targets, strategic infrastructure facilities located at a considerable distance from the airfield. The Su-35S fighter has already proven high efficiency during operations in Syria.

The main advantages of the MiG-35 fighter include reduced radar visibility, four-fold redundancy of control channels, next-generation avionics and a modern cockpit information and control field with a high level of automation, new engines with increased traction, the use of all types of guided and unguided missiles, and the latest adjustable bombs.

The price tag for the Su-35 falls in the range of $83 million to $104 million, while the MiG-35 is estimated to cost around $45 million. Azerbaijan's 2020 defense budget increased by 20 percent to $2.3 billion, a figure that some experts believe allows the country to purchase the most advanced Russian military aircraft.