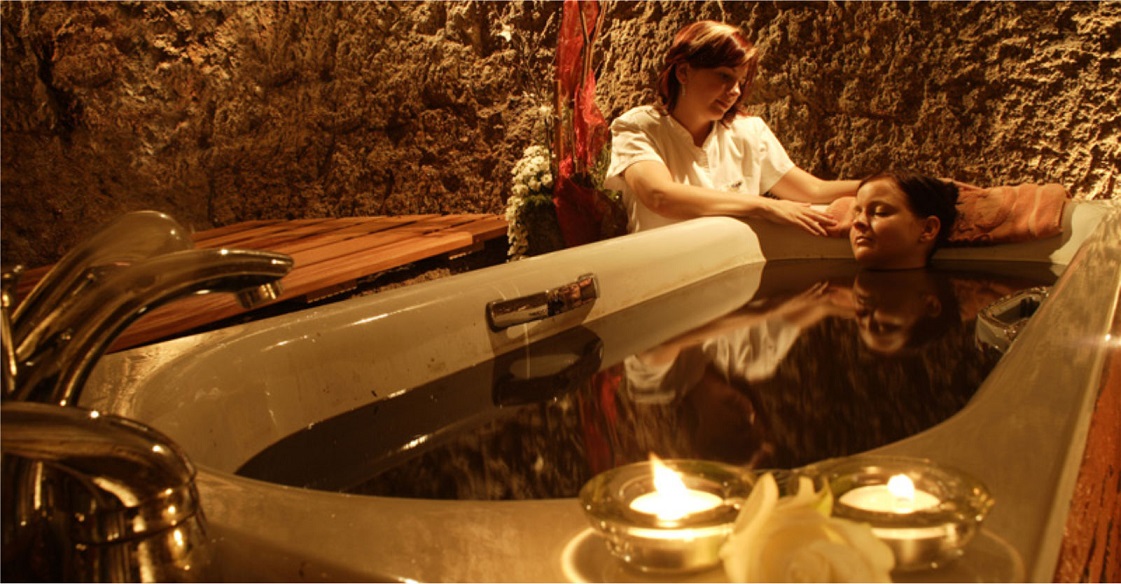 The unique grade of black-brown, thick oil found in Naftalan is said to have healing properties that have helped patients suffering from rheumatism, arthritis and psoriasis, as well as 67 other illnesses.

Official delegations from the largest medical networks in Germany, such as Charite, Vivantes Hospital Group, and MEYTEC GmBH, visited Baku to attend the German-Azerbaijani Business Forum on Medical Tourism, held on April 10, to explore ways German companies and investors can tap into what is a growing sub-sector of the tourism industry in the Caspian region.

“If we try to create a joint platform for cooperation, which can help us improve our current collaboration into a better and broader vision, I think both Germany and Azerbaijan can benefit from such a joint work,” Viacheslav Galchenko from MEYTEC GmBH Medizinsysteme Company in Germany told Caspian News.

MEYTEC is engaged in telemedicine, amongst other things, all across Europe, and was just one of 130 companies to send representatives to Azerbaijan’s capital and attend the forum, which was organized by the German-Azerbaijani Chamber of Commerce (AHK Azerbaijan).

Healthcare is a sector that has grown rapidly in Azerbaijan over the recent years.

Around $440 million, or 4.4 percent of the state budget, was allocated for health care system in 2017, up $3 million from 2016 figures. Over 600 hospitals and clinics have been built or overhauled within the same year, and six new hospitals are slated to be constructed across the country this year.

Malik Karimov, AHK board member and director at one of the private clinics in Azerbaijan, said Azerbaijan is emerging among global health tourism destinations, given the growing number of tourist calls for medical consultations and general check-ups at local clinics.

“The bulk of tourist arrivals in our clinics are from Iran, Turkey, Georgia and Russia. Particularly during the winter tourist season we see more tourists from Russia applying for our healthcare services,” Karimov told Caspian News.

“Unfortunately we are not observing the same trend with European tourists,” he added.

“That’s due to mainly the superior healthcare infrastructure in their own countries. However, we’re along with the government working on mass projects to ensure that quality care is on a par with the highest European standards.”

Azerbaijani officials are looking to bring the national healthcare system in line with the global standards and lure tourists for health purposes into the country. Bona Dea International Hospital was launched in Baku last month precisely for that purpose.

As of the few ultra-modern hospitals in the South Caucasus and Caspian regions, the facility is based on European standards of care and uses top-notch medical equipment. Bona Dea offers over 25 healthcare services, having partnered with large European medical, paramedical and management staff, as well as leading medical institutions within the European Union, and is staffed with 22 doctors and 30 mid-level medical staff from countries including the U.S., Canada, Germany, Italy, France and other EU states.

Ruslan Guliyev, Chairman at the Azerbaijan Health and Thermal Tourism Support Association, who was recently appointed the president of the Global Healthcare Travel Council, said that Azerbaijan has real potential due to not only its modern infrastructure but health resorts catering to tourists.

“We’re planning to hold an International Health Tourism Forum in Baku sometime in February of the next year, and invite hundreds of professionals from the health tourism sector from around the world to our country,” Guliyev told Caspian News.

“The main purpose is to learn, investigate and later apply the latest innovations, start-ups within a single model [for healthcare tourism] in our country. This will give us a unique opportunity to promote Azerbaijan in global tourism markets,” Guliyev added. “We are planning to organize familiarization trips for international delegations to our Naftalan and Galaalti resorts.”

Naftalan city in central Azerbaijan is a one-of-a-kind stop for health tourists and luxury seekers alike. The city is home to natural spas and facilities that have curative crude oil baths. The unique grade of black-brown, thick oil found in Naftalan is said to have healing properties that have helped patients suffering from rheumatism, arthritis and psoriasis, as well as 67 other illnesses.