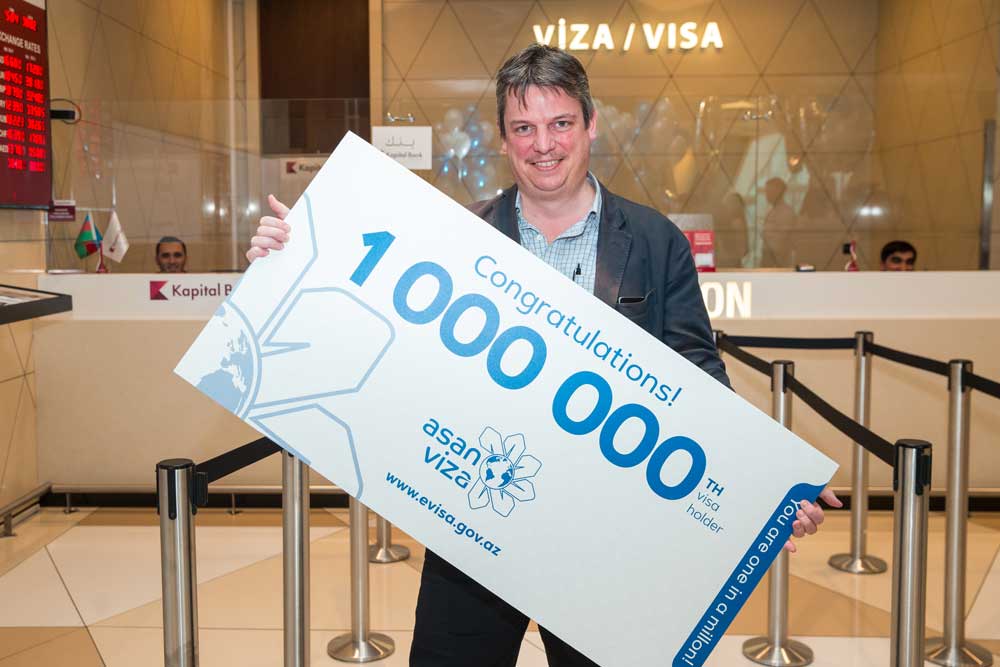 Louis from France probably did not expect that his application for a visa to Azerbaijan at an airport in Baku would be a cause for celebration, but that is precisely what it was.

Azerbaijan’s state-of-the-art visa issuance system, known as ASAN (Azerbaijan Service and Assessment Network) issued the millionth electronic visa to the Frenchman at the Heydar Aliyev International Airport on Monday. Using the Urgent e-Visa option, Louis secured his application for entry into the Caspian country within just three hours after submitting his application.

In video footage released by ASAN and posted to Facebook, French national Louis Henri Samoyault was first told his visa application had been rejected – but this was a ploy to up the excitement when, moments later, the staff at the visa counter announced that Mr. Samoyault was the recipient of the one-millionth visa.

As a thank-you, Samoyault received a keepsake depicting the map of Azerbaijan and was taken on a tour of one of the ASAN Service centers in Baku, before being taken to the Shahdag winter resort on the slopes of the Caucasus Mountains.

Two electronic-based options are available to tourists and businesspersons looking to acquire a visa for entry into Azerbaijan. A standard e-Visa is issued in three days, and the Urgent option – which requires a higher fee – is processed in just here hours. Citizens and stateless persons residing in 95 countries, including the United States, the United Kingdom, Canada, Germany, Brazil and China, are eligible for single-entry electronic visas to Azerbaijan. Additionally, nationals from 15 countries, such as Bahrain, China, South Korea, Japan and others are allowed to get a visa to Azerbaijan within minutes at standalone terminals at the Heydar Aliyev International Airport in Baku.

Azerbaijan, located at the crossroads of Europe and Asia on the ancient Silk Road trade route, saw a record-breaking number of tourists arrive in the country in 2018. According to data provided by the State Statistics Committee, the Caspian coastal country received 2.85 million tourists from 196 countries over the last year.