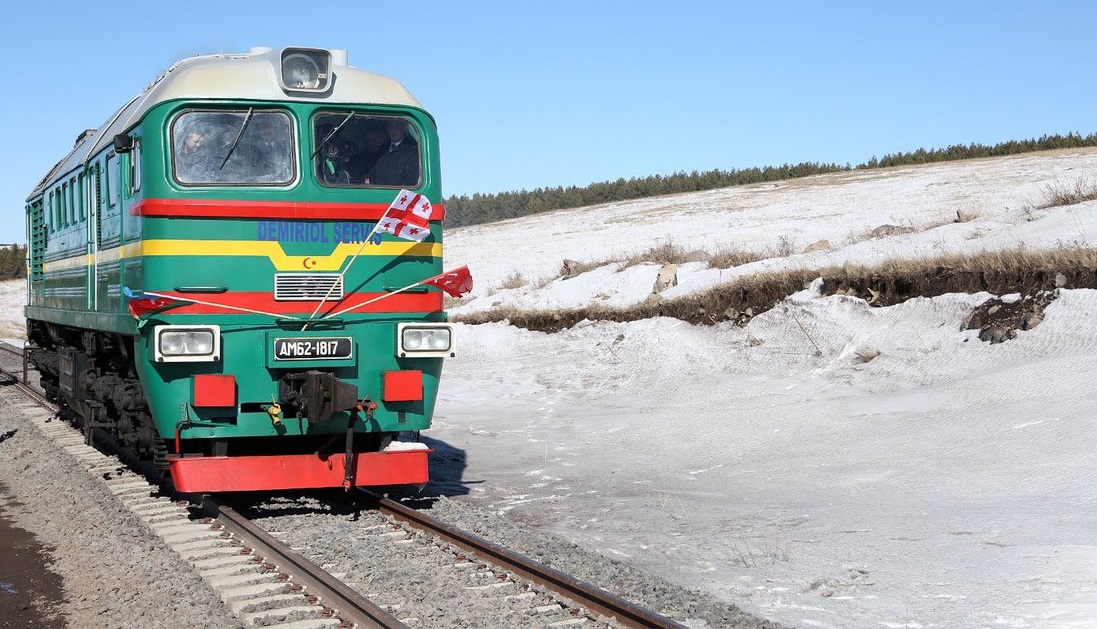 Azerbaijan, Georgia, and Turkey hope to see 17 million tons of cargo pass along the BTK line / Foreign Ministry of Georgia

The role of the Baku-Tbilisi-Kars (BTK) railway in enhancing the economic growth in the South Caucasus, as well as in linking Asia and Europe, was a key issue during talks between the economy ministers of Azerbaijan and Georgia, held in Tbilisi on March 6.

“[Our] main goal is to increase the volume of goods transportation through Baku-Tbilisi-Kars railway and explore the ways of using the existing opportunities more efficiently,” Azerbaijan’s minister of economy Shahin Mustafayev said in a meeting with his Georgian counterpart Giorgi Gakharia.

Mustafayev led a large delegation of high-ranking officials from the ministries of finance and economy, State Oil Fund, Azerbaijan Railways, Baku International Sea Trade Port, and Caspian Shipping Company to Georgia, to deliberate a range of issues of mutual collaboration.

The BTK railroad was identified as a robust driving force for economic growth in the South Caucasus region, helping bridge European and Asia trade ties. The BTK, which came online last October 30, traverses Azerbaijan, Georgia and ends in far eastern Turkey, passing through the cities of Baku, Tbilisi and ending in Kars.

Several countries have expressed their interest in using the BTK railway in their international cargo transportations. Russia, Iran, Kazakhstan, Afghanistan, Pakistan and China have all expressed interest in moving cargo on the line, with goods mostly going to Europe.

Geopolitical analyst Mahir Humbatov at Center for Strategic Studies in Baku says China is poised to be the key beneficiary of the BTK.

“It is in fact beneficial, both from political and economic aspects, for China to use BTK and other linked projects in the territory of Azerbaijan as part of its Belt and Road Initiative [BRI],” Humbatov told Caspian News, referencing China’s mega-transportation project that aims to upgrade and connect shipping ports stretching across Asia, Africa and Europe.

“It is much shorter than any other routes, as an example, the maritime route in general takes 36 days to reach a destination [from China to Europe]. The Trans-Siberia [railway] route 20 days; Chongqing-Xinjiang-Europe route 16 days. [China’s] BRI initiative leveraging the BTK railway takes just 12 days,” for goods to move from east to west.

Georgia’s government is hoping to link the country’s market to those of Europe and Asia thanks to the railway line. In January 2018 at the World Economic Forum in Davos, Prime Minister Giorgi Kvirikashvili said the BTK railway has changed the transportation map of Georgia.

"The Baku-Tbilisi-Kars railway project has changed the country's transport map, it connected Georgia with China, Kazakhstan, Azerbaijan, Turkey and Europe, the train from China directly can reach Georgia in nine days, a great achievement not only for our country, but for all states involved in the project, "Kvirikashvili said.

The initial capacity of the BTK railway is estimated at between three and five million tons of cargo during its first three years of operation, while by the fifth year experts expect it to reach between six and eight million tons, as well as move three million passengers. Eventually, the three countries involved hope to see 17 million tons of cargo pass along the BTK line.