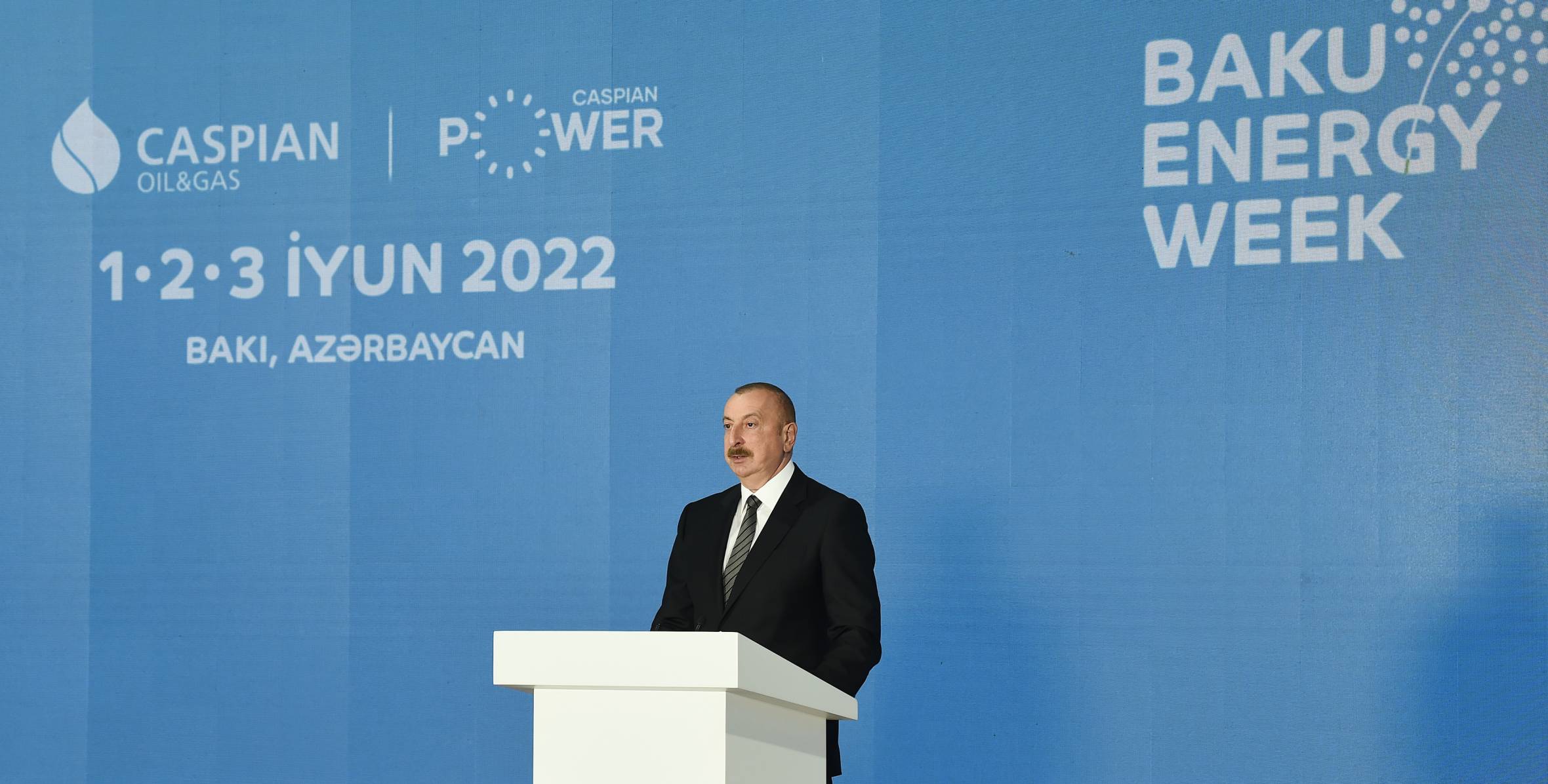 President Ilham Aliyev said the successful completion of the Southern Gas Corridor on the last day of 2020 is a testament to the common will and teamwork.

President Aliyev said Azerbaijan exported 22 billion cubic meters (bcm) of natural gas in 2021. According to him, the export volume projected for 2022 is 24 bcm and added that there is room to add more supply in the coming years.

“Now we think about the expansion because there is a demand for that. And that, of course, will take time, a lot of financial resources, and close coordination, cooperation and active dialogue with all countries involved. And we are ready for that,” President Aliyev said, adding that the contracts and investments are necessary for expanding Azerbaijani gas deliveries to Europe.

“Therefore, not only TAP will need rapid expansion, but also the South Caucasus pipeline and TANAP. So we are working on that," he said.

Azerbaijan has been sending natural gas via the TAP to the European marketplace since December 31, 2020. TAP forms a part of the Southern Gas Corridor (SGC) mega pipeline, which is designed and built for increasing and diversifying European energy supplies by bringing Caspian natural gas to Europe for the first time. TAP, the final segment of the corridor, starts at the Turkish-Greek border and runs along 773-kilometer onshore and 105-kilometer offshore routes traversing Greece and Albania toward its end destination in Italy.

The 3,500-kilometer-long mega pipeline strengthens European energy security, diversifying its energy supplies and boosting decarbonization efforts by providing an uninterrupted flow of Azerbaijani gas. The Southern Gas Corridor, defined as one of the world's most complex and expensive pipelines built to date, is a unique energy route that carries natural gas from the Caspian Sea reserves directly to the European marketplace. The main source of natural gas for the SGC is Azerbaijan’s offshore Shah Deniz field, with an estimated 1.2 trillion cubic meters of proven reserves.

As a response to the growing demand for natural gas in global markets, in particular those in Europe, Azerbaijan is slated to put two new gas fields into operation, which can add significantly to the current volumes reaching European consumers.

Azerbaijani authorities have previously confirmed 2.6 trillion cubic meters of proven natural gas reserves of the country, which they believe can supply foreign partners for the decades to come.

“We are ready to cooperate with every company, with every country, which also wants to be with us at this important time when the geopolitical situation in the world is entirely different from what it was several months ago,” President Aliyev said in his speech at the Baku Energy Week on Thursday.

The European Union countries have been experiencing a steep gas crisis amidst the escalation of an economic conflict between the West and Russia – the largest supplier of natural gas to Europe. In 2021, the EU’s gas imports from Russia stood at 155 bcm, sharing 45 percent of the bloc’s overall natural gas imports.

However, since Russia invaded Ukraine in February of this year, the supplies dropped due to West’s economic sanctions against Moscow. Russia’s state-run energy operator Gazprom halted gas exports to Poland and Bulgaria as it demanded the payments to be made in Russian roubles.

In April, European Commission President Ursula von der Leyen said “the era of Russian fossil fuels in Europe will come to an end” as the EU leaders agreed to reduce imports from Russia by 66 percent by the end of 2022 and stop supply completely by 2027.

The escalations with Russia pushed the EU leaders to seek alternative supplies to fill the gap left after decrease in imports from Russia. Although Azerbaijan is not able to compete with Russian supplies given the volume of its annual transportation, Baku is well placed to help the EU solve the gas crisis. In May, Azerbaijan’s deputy energy minister, Elnur Soltanov, held talks with Cristina Lobillo Borrero, the EU’s energy policy director, “to discuss ongoing gas cooperation and prospects for increasing export volumes of Azerbaijani gas to the EU.”

In the first quarter of 2022, 2.6 bcm of Azerbaijani gas reached the European markets. Until the end of the year, the country’s state-run energy conglomerate SOCAR plans to increase the supplies by 30 percent to 10.5 bcm, exceeding the annual contracted volume.